Am I the only one who hates the new Blogger?  I didn't mind at first.  It was easier to upload pictures.  But after about FIVE attempts to write the same post with pictures of my garden, my relationship with the new post editor has grown cool.  It uploads the pictures great.  But then I walk away from my computer while they're uploading (guess what, Blogger, I don't sit in front of my computer all day), and when I come back, the computer's fallen asleep.  When I wake it up ... my pictures are gone.  Or else the browser seizes up (this happens almost daily; my computer is kind of buggy) and I have to restart it.  No problem, right?  Because Blogger autosaves everything, my post will still be there!  And it is ... but without the pictures.  I am sick to death of uploading the same dang pictures for weeks while my garden keeps growing and looks nothing like the pictures by now.

So forget that post.  Imagine you were seeing pictures of a tomato jungle, a pumpkin jungle, and a few smothered and crowded cucumbers and bell peppers.  Imagine some rather bug-eaten pole beans and a bare space where Marko dug up all my bush beans.  Picture a giant cilantro plant going to seed and some herbs at their prime.  There's some lettuce going to seed now (Mignonette Bronze, which was heat-tolerant enough to last till now ... and that's really the only thing it has going for it; it's much too bitter for me (or else that's the heat's fault)).  There are still no carrots or spinach.  There's a bare bed where the sugar snap peas were; the heat killed them but they had a decent run.  I've planted chickpeas there, but they didn't sprout.  Either I fail at growing chickpeas, or the kind from the grocery store doesn't sprout.  One or the other.

Use your mind's eye, because I'm telling you, I don't think I'm ever gonna get those dang pictures up.

I have four or five good posts in my mind, but there's no promising I'll get them onto here.  Michael still is rarely asleep before 9:30 (unless today is the start of a new trend!) and I have trouble (read: distraction by Marko) blogging in the daytime.  I'm also really distracted with two busy Facebook groups (where I've been debating the future of Regnum Christi; heavy stuff, but I'll write about it here if there's interest) and a translation project I somehow volunteered for.  (After I said I'd do it, the woman who wanted it done wrote back, "Thanks!  I have a six-month-old so it's really hard to get anything done."  I wanted to take it back!  If they're too busy with a six-month-old, I am definitely too busy!  But ... somehow I've found time, which goes to show that when you really want to make time, it often appears.)

Marko has been spending his days singing, playing guitar, and weedwhacking.  Nothing new.  Sometimes he sleeps through the night, sometimes he doesn't.  One night he stayed up for FOUR HOURS from 12-4 a.m.  Not cool, kiddo.  He slept till eight afterward, but Michael didn't.  Sigh.

Michael is two months old and getting chubby.  If I get really optimistic I might try to upload a picture.  Or I might just go to bed and call it good.  He still uses the potty pretty reliably (way more reliably than Marko ever has, except for that one golden week at 12 months old when I was ready to say he was potty trained, ha ha ha).  It's to the point that I don't think much of laying him down for a nap on my bed with nothing on or under him.  If he pees on me, it's usually because he's fussy and doesn't want to go on the potty.  So I throw a diaper across my lap and just wait for him to go.  It's not a big deal.  I don't think we had a single "accident" today.  I did get wet once, though, because of an aiming malfunction.  Elimination communication is way easier than I was led to believe.  (Though I willingly will accept that there will probably be bumps in the road as he grows older.)

The big thing that's been eating up my time isn't the boys OR the internet, though.  I really do have time enough for everything...if it were not for a housekeeping nightmare which I will probably tell you about when it's OVER because it's just too awful to even talk about right now.  Let's just say it has me sweeping, vacuuming, and doing laundry daily.  That kind of eats into one's free time.

Other than that, though, having two kids continues to be fun and not terribly difficult.  My great trial is getting Michael to nap.  Turns out he's just as bad, and in just the same ways, as his brother in that regard.  He goes to sleep all right, but he can't tie one sleep cycle to the next without help.  He wakes up after 45 minutes and needs to nurse back to sleep.  But of course I have this other kid, who either follows me into the bedroom and stands next to the crib yelling, "Are you flirsty?  Are you flirsty?"  [this is how he asks for water, which I can't just leave out for him because he drinks what he wants and then spits the rest onto the dog] OR hangs out in the living room being nice and quiet and ripping off my laptop keys or dumping the salt shaker onto the floor.  He's just not quite ready to be left unattended.  (Sometimes he plays quite nicely all by himself in his room.  But he seems to have a spider sense for when I would really like to be left alone, and doesn't do it.)

We have two solutions right now.  One is that I've moved the rocker to the living room and can often nurse Michael back to sleep there.  The other is the wrap.  I hardly wore Marko at all at this age because I didn't have to.  But with Michael, if I can't get him to nap easily for the amount of time he needs, I just pop him into the wrap.  He sleeps really well in there, he can easily be bounced back to sleep in half a minute if he wakes up, and I can keep up with whatever Marko's got going on at the same time.  And even vacuum!  I don't think I could survive without that wrap.  (It's a homemade woven wrap; that's my standby right now, but I think I might pull out the homemade mei tai soon.)  An added bonus is that wrap naps help him stay on some kind of schedule, which helps his "down naps" last longer too.  He took a two-and-a-half-hour, uninterrupted nap in bed today.  Plus one very interrupted "down nap" and one wrap nap.

Did I mention Michael can smile now?  I keep trying to get it on film, but failing.  It's cute though.  He's much more sparing with his grins than Marko was, but I get a few good ones every day.

Oh, here's a picture for you.  I made it as an imitation of one of Marko at the same age.  Compare: 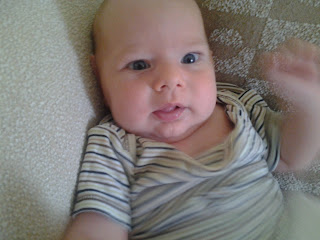 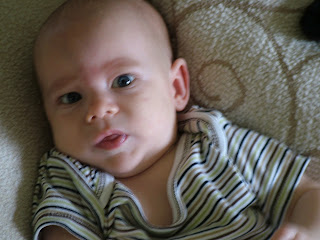 Okay, I think that's enough rambling and parentheses for one night.  There's a massive storm rolling in, hopefully to break up the 100-degree weather, and I've got to get to bed before the thunder wakes the kids up.
Posted by Sheila at 9:59 PM

I'm kind of interested in the Regnum Christi debate, not because I was ever a part of it, but because I have followed your story. If you don't write about it here, could you direct me to the facebook group so I can continue to follow and read?

Thank you. By the way, Marko and Michael look amazingly alike!

Maybe if the photo files are smaller, they will upload faster. Microsoft Picture Viewer or even Paint can do the trick in terms of altering pixel or inch size, and photos can be shrunk in batches.

I love how alike Michael and Marko look at that age!

I hate the new blogger too, though I'm starting to figure it out. Grudgingly. (My connection is fast enough, I guess, that I haven't had trouble losing picture uploads yet.)

My peas died from the heat too, which was really depressing because they were the only thing I planted, figuring they'd be easy and low-maintenance. Noooo.

I've enjoyed (if "enjoyed" is the right word) reading your other Regnum Christi post.

Your kids are adorable and look so alike!

Pretend there are transitional phrases somewhere in this comment? I've had a rough weekend and my brain is kind of running its emergency generators right now.

Anon, sorry, the FB groups are all private. A lot of people still are afraid to share their stories publicly. You can read more elsewhere, though: regainnetwork.org and life-after-rc.com are good places to start.

Sojourner, I think it's ironic that you apologize for your lack of transitions in a comment on a post that has none either (unless parentheses count (which they don't IMO)).

I have one more RC post I have to write, to explain how I finally broke ties. If I ever get around to it!

I'm sorry that you've had trouble uploading photos, Sheila! =( I would have loved to admire your jungles.

While I haven't had any trouble uploading photos, I tend to do one at a time. And I usually resize it with Office first. Do you think that would help, even if you were uploading in batches?