It felt like spring for a long time before anything would really grow. I admit I jumped the gun and took all springlike weather as permission to plant stuff. Some did grow a little ... but it didn't really get off the ground until a few weeks ago. I think the real trick was day length. Until those plants were getting a summerlike dose of full sunshine each day, they weren't going to grow much no matter how warm it was. Especially since my front yard gets kind of a lot of shade in the afternoon.

Now, though, I have peas! I planted these way too early (some Feb. 21st, some March 11th -- which came up within a week of each other, because February was just too early) but they grew all the same. For a long time they were just teeny things, prone to being stepped on by the two-year-old. But now they are really beginning to put on size, and I finally had to build them a trellis! 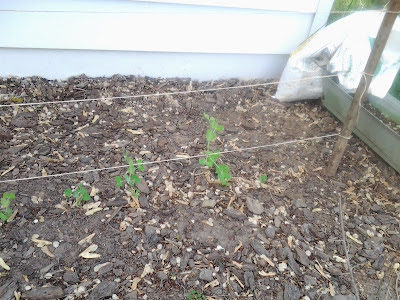 After all my griping about lettuce, some did sprout. Five plants, to be exact. I also transplanted two dozen that I started indoors ... of which two very pathetic ones survive now. Every day another would keel over, despite my trying a number of different things to save them. They just weren't having it. But the ones that sprouted on the spot look great, although I think that's got to be maybe a 3% germination rate. All in the same general area. I wonder if there's something different about the soil there. The sad thing is that I'll have to thin them, while leaving the rest of the bed empty. 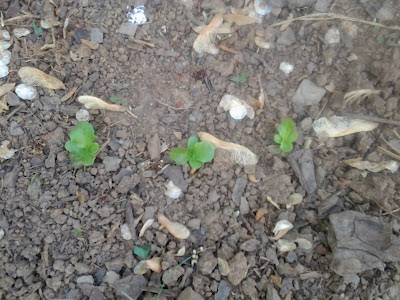 Spinach I've planted twice and nothing's come up. Carrots I think I've done three times, without seeing a sprout. I know they're supposed to take a long time, but the one bed's been sitting empty for a month now. I think I must have been too careless about keeping the bed "constantly moist." How the heck are you supposed to do that, anyway? (And yes, I tried putting cardboard over it. It dried out anyway, and became a home for about a million pillbugs.)

But the garlic from last fall is shooting up. Can't wait to see how big those bulbs get. 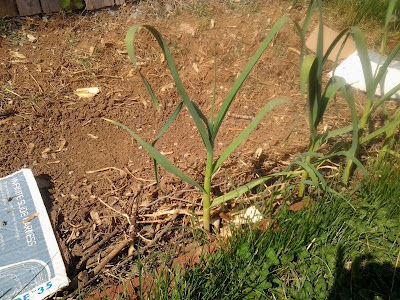 Next bed is tomatoes and cucumbers. I took a leap of faith and transplanted my tomatoes. They could have stayed inside longer, and it's nowhere near when I'm supposed to plant them, but I was going crazy. I felt like there was no way I could have this baby until those tomatoes were in the ground. Because there's no way I nurtured them for over a month just to let someone else plant them. Is anyone else this possessive over their garden? I can't let anyone else do anything because I'm afraid they'll do it wrong, but I can't seem to explain what I want so they can do it right. That would be why I keep hurting my back doing all this gardening work when I'm really way too pregnant to be hunched over digging in the dirt. (You would think it would be good for my back to be on my hands and knees. But it sure does hurt afterwards.)

Here are the Jersey Giants. It's a new variety to me, which is supposed to be good for sauce. Of these two lovelies, one is going to have to go. There were two in this pot and I couldn't bear to thin them, so I decided to transplant both in case one keeled over. Only they both handled it great so now it's still a matter of choosing which perfectly healthy plant to kill. I keep wondering if I can carefully pick one out and move it without disrupting the other's roots. 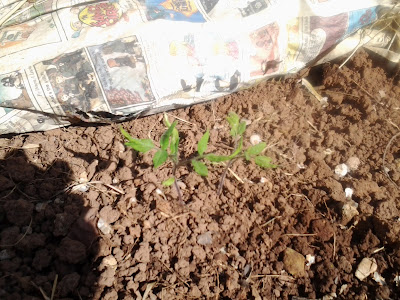 I'm also growing the Cherokee Purples again, because how could I not? They did so fabulously and tasted so good. (The trick is to learn what "really ripe" looks like and not touch them till they reach that point -- they are much too bland until they are kind of soft and purplish on the bottom while the shoulders are just a little green.) I transplanted in two of each variety, and direct-seeded two more of each. Direct-seeding tomatoes? Worth a shot, I figured. I've heard they grow much better taproots that way, and so are less sensitive to the flood-and-drought summers we have here. Also, I kind of stink at growing things indoors, especially with no good south-facing windows. Direct-seeded stuff, if it comes up at all, always does so much better in my garden. I think it's because it's already adapted to the environment it'll have to live with later.

I'll have to show a better picture of my cucumber-and-tomato trellis when it's done. Right now you can only see the cucumber part. But I'm connecting the two cucumber trellises with long pieces of twine on each side, so that the tomatoes will be confined to a long rectangle. Hopefully that will give them just a bit of support without restricting them too much. All I know is, tomato cages are not good enough for the punishment my tomatoes inflict. What kind of cage would it take to support an 8-foot tomato plant? 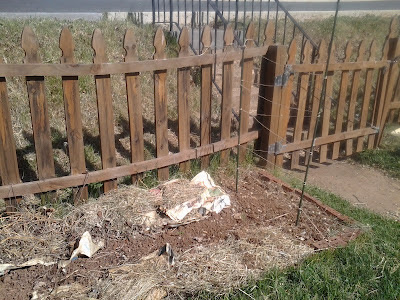 You can see how I just pulled back the mulch from the middle of the bed to stick the tomatoes in, leaving the rest to continue to mellow and not grow a crop of weeds for me. This area is the one that always grew the best, thickest, longest grass -- which tells me it will be very fertile, but it also means there are still a lot of runners in there. Once the tomatoes are bigger and the cucumbers are up, I'll re-cover the whole thing. I'll have to keep an eye on it, though -- I do want to make sure slug season is past before bringing the mulch too close to my plants. I don't want to make a habitat for the beasts. We did have some slugs last year, especially where I'd mulched, though they weren't a major problem. (I had to explain to my mom, who's only grown tomatoes in Washington, that when I say "we have slugs" I don't mean, "we have giant monster slugs that devour everything in sight." We have teeny-tiny slugs that seem to prefer eating decaying matter to eating actual plants.)

I planted the beans way too early, too. (See a pattern?) I put them in and then read about how awful it is to plant them in soil that hasn't completely warmed. And then we had a cold wet week. But once the sun came out and warmed things up again, they started coming up. The bush beans (Thai Star) didn't seem a bit fazed by the delay. 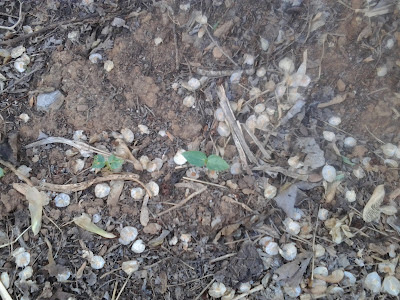 The pole beans (Kentucky Wonder) have been a little less consistent. First there was only one sprout. Then two. Now there are four, and I haven't yet decided whether to plant more or wait and see if more come up. 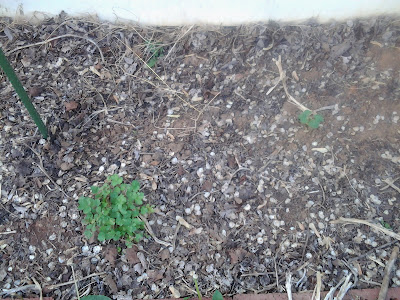 You can definitely see my cilantro is doing well! I transplanted it outside on March 27th because it was outgrowing its pot. I've had to set a bucket over it for several frosts, but it wasn't bothered. The basil I later transplanted next to it, though? Vanished without a trace. Most of it was dead before I even brought it outside. I'm not sure what was wrong with it. (Well, half of the seedlings lost out to the toddler. Sigh. But the rest are a mystery.)

The only thing left is the pepper and pumpkin bed. Right now it is a glorious heap of leaves and cut grass, warming up in the sun while I wait for my green peppers to be ready to go in. (I'm not as anxious about them as I was about the tomatoes. They can wait till late May if they have to.) I did pull aside the mulch and dig a bit today to make the pumpkin hills. And then, having made the hills, what was there to do but stick a few seeds in each, just for the heck of it? Yes, I did, and I'll let you know if they come up.

This stage of gardening is exciting. But not half as exciting as the picking and eating phase. Looking forward to that part.

For the record, I'm 37.5 weeks pregnant now ... so we'll see when this baby shows up, won't we? I'll try to at least post a picture as soon as possible so you all know. I can do that from my phone now so it should be easy. Wonders of modern technology.
Posted by Sheila at 8:53 PM