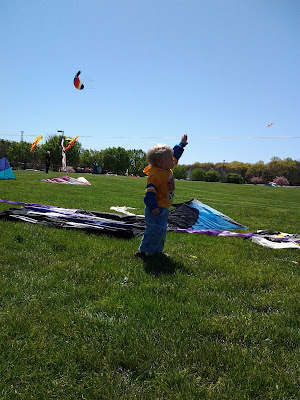 I told him not to cross that string. And he didn't.
You know how I wrote the other day that we're smack in the middle of the "terrible twos"?

Maybe we were closer to the end than I thought. Or something.

Last Tuesday, I was at a friend's house. She has a daughter three months older than Marko. And she told me something very encouraging: "When she turned two, it was like a light switch went on. She's so much easier. She understands much more and can follow directions or wait for something." I thought, "Let's hope this happens to us, because seriously I am wanting to trade him to the gypsies and he won't even be two for another five days."

On Wednesday, things suddenly began to turn around. We went to the store together, and Marko was a delight. The rest of the afternoon, he was a little clingy, but not too bad. We read a lot of books, weathered one or two tantrums, and made it to the end of the day happy. I peeked into his mouth -- sure enough, it looked like those last two molars were pretty much through.

Thursday, he woke up happy and continued happy all morning. Then he got drowsy and climbed into my lap, where he fell asleep while I was on the phone with my mom. I decided to just let him sleep, even though he doesn't usually nap. Eventually I did have to wake him up. I lay down next to him and quietly jostled him awake. He sat up and started stroking my hair, smiling at me and saying, "Gentle pets, like this!" Not only is this HUGE for a kid who almost never wakes up from a nap happy, but I couldn't help thinking of last month ... you know, when he was crying "Marko WANT to hurt Mama!"

The rest of the day was a bit rough, because I had to take him with me to a doctor's appointment which lasted an hour* and then drive an hour and a half to pick up John from the airport. We were gone from home a total of five hours, and almost none of it was toddler-friendly time. But he was incredibly good at the doctor's office, even though there were hardly any toys in the waiting room and none in the examining room. I planned a brief stop at the park before going to the airport to smooth things over, and encouraged him through the 90-minute drive with reminders that we were going to the park. It was clearly very hard for him to stay buckled in that long, but he didn't cry. He just would ask plaintively, "Yes we are going to the park?" every five minutes or so. And when we hit a red light, he would ask, "Shall we keep driving?" (Yes, apparently this is how I talk to him. So weird to hear myself parroted back.) He held my hand in all the parking lots, went where I asked him to go, sat still on my lap in the airport, and was amazingly patient for the trip home, too.

Since then, he has been AWESOME. Sure, there's a meltdown here or there when he's getting tired. But nothing like how it was. And best of all, he's getting it. He's understanding what I tell him. When I say, "Please don't touch that," he puts the thing down and finds something else to play with. When I say, "Do you want to put this book on the shelf for me?" he gets all excited and runs to put it away. Not 100% of the time -- but often.

Language has taken a huge step forward, too. He parrots less and makes up more of his own original sentences. Sure, he still uses pronouns exactly backwards. (He calls himself "you," exclusively, never ever "I.") But I was reading to him today and pointed out that there was a monkey standing on the table in the picture. He said, quite disapprovingly, "He must not do that." I'm quite sure I never told him that. In fact, he never used to care much for the pictures in books, except perhaps to name individual items. Now, he likes to describe what is happening in each picture: "They are eating the cake," "That man has a balloon," or whatever. Sometimes he just repeats what I've said on previous read-throughs, but sometimes he really does come up with the whole thing himself.

I'm beginning to understand how Montessori works. I read a book full of Montessori activities a few weeks ago, and I just couldn't fathom how you would get kids to do them. Now, Marko very eagerly imitates the same sequence over and over again, usually after I show him how. Last night he happily collected every book scattered on the floor in the living room and made them into a neat stack. Then he ran back and forth to the kitchen, throwing away miniscule bits of trash I found for him. He's gotten into puzzles and likes fitting the pieces over and over. His attention span seems much longer than before. So I actually could see him doing some of the Montessori activities with that kind of determined focus that they talk about. Not that we are set up to do any of that here; I'm not that on-the-ball.

Is he suddenly an easy child? Well, no. He's kind of hyper sometimes. Today he spent quite a while dancing and jumping up and down with the dog while laughing hysterically and throwing his stuffed animals in the air. But it's a nice kind of hyper, not the kind where he buzzes around the room until he smashes into something and then cries hysterically. Which is what he was doing last week. This time, I think all we need is for the weather to warm back up so we can spend all day at the playground.

In any event, so far, I can honestly say, I LOVE two. I'm really enjoying my last weeks with Marko as an only child. I know I may have said this about other ages, but this, this is the best age.

*Dealing with the issue in this post. This doctor was incredibly helpful and immediately agreed to everything I wanted. The office staff was not pleased to have to do the referral for my insurance company, but they had to because the doctor told them to. So we might actually get some money back from the insurance company after all! Also, he sounds like he'll be a great doctor for the kids. A success!

(Meanwhile the first doctor's office, the one that was no help at all, sent me a bill for the visit and can't seem to explain why they didn't get my insurance company to pay for it. My insurance company says they never sent them a claim at all. I have been bouncing back and forth between the insurance company and the doctor's office for three days now and I am going NUTS because they won't talk to each other. Also, why does asking a doctor a simple question cost $159.38 anyway?)
Posted by Sheila at 8:34 PM

Some friends brought their two year old over the other night. His favourite game as hide and seek--and he didn't care if you always hid in the same place (LOL!). And his second favourite thing to do was tell you what name, shape or colour anything you pointed out had. I spent the better part of an hour grilling him, and I was his favourite new grown up at the end of the night.