My sourdough rose this time! 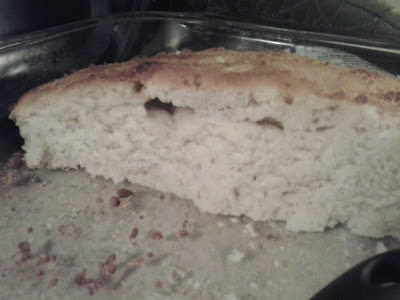 Remember how, ages ago, I made a sourdough starter? It did okay. Never got all that bubbly, but it was sour-smelling enough. I made garlic knots with it, and they were a bit too sour and not risen enough, but not terrible. Pretty soon, though, the starter got mold on it and I threw it away.

I had given up on the whole idea of sourdough until two weeks ago, when I saw on Modern Alternative Mama that Kate had trouble with her starter as well. She had been told -- like I had -- that it's okay to pour off the "hooch," the funky liquid that rises to the surface. Apparently the hooch helps keep the mold off your starter. She recommends stirring the hooch back in every time you feed it, at least until your starter is well-established.

Another tip which I recently read, and also established experimentally, is that you really do have to get rid of some of your starter when you feed it. I had been told that you don't have to get rid of any starter, just don't feed it quite so heavily. That actually doesn't work as well. A good proportion is one part original starter, one part flour, one part water, each time you feed it -- though I don't stick to that. I try to keep the starter to about a cup, and feed a quarter cup of flour and a quarter cup of water each time. I don't throw the old away, but I use it to make sourdough pancakes or something else that doesn't require much of a rise. The more you use your starter, removing some and refreshing it, the quicker it will come to life.

The reason, as far as I can see, for this is that the starter needs to breathe. If you've got a quart jar full of starter, only the top layer is really active. Much better to keep a smaller starter so it can get plenty of air.

A few other handy things I've picked up on: I don't feed quite equal parts flour and water. I tend to use a little less water. The reason for this is that a thicker starter shows more bubble action down inside the jar -- probably just because it holds the bubbles better. I'm not sure this means it's a stronger starter, but it can't hurt.

Another is that warmth will make a huge difference to your starter. I can't afford to be running a hot pad or low oven all the time, so most of the time the starter has to muddle through in 68 degrees like the rest of us. But when I feed it, I often give it a quick burst of time in a warm oven -- I preheat the oven for a minute, turn it off, and put the starter in there for a bit. Gives it a head start. The same goes for giving the bread dough, when you make any, a chance to rise. A nice warm place will do it good. I remember my mom having good luck putting dough to rise on top of the dryer while it was running!

A final tip: it shouldn't smell overpoweringly sour. I notice in my post from almost two years ago that John kept complaining about the smell of the starter whenever he was in the kitchen. That is way too sour. My current starter only smells if you stick your nose right in the jar, and then it smells kind of like beer.

So far, I've made sourdough pancakes a few times, and loved them. They're even easier than regular pancakes, and they taste fabulous (and not sour at all). The texture's a little different -- almost like injera, because it's so bubbly. I found it helpful to mix the baking soda with water before mixing it in, so it wouldn't clump up in the batter. We had the pancakes with jam, but they'd be even better with berries or bananas.

[ETA: I also made this sourdough carrot cake, which was fabulous. Who would have known you could make cake out of sourdough? I had seen recipes, but figured it must not turn out very cakey .... I was wrong. It was very light and just the right amount of sweet. This would be great with cream cheese frosting, too.]

And then I screwed my courage to the sticking-place yesterday and tried to make focaccia. I planned lots of extra time because I was sure I'd need it, and planned to count any decent rise as "doubling." I remembered that my garlic knots never doubled. But after just the recommended rise time (in a warm oven) it actually did double! The bread turned out excellent. Its only flaw, in my opinion, was in being a bit too tall. Isn't focaccia supposed to be an inch or so thick, not two and a half? I just had too much dough for the size pan I had -- and that's even after taking a handful of it out and making garlic knots out of it. Next time I think I'll make two pans of it instead of just one. I guess I wasn't expecting quite the meteoric rise that I got! I had been convinced by my past experience that sourdough doesn't rise much. This one rose just as much as a regular yeast bread would. And it wasn't particularly sour, either -- just a faint tang, not so you'd notice without looking for it.

I don't know how long I'll be able to keep up with my starter before letting it go dormant in my fridge and half forgetting about it. But meanwhile, I'm really enjoying baking with it ... and eating the bread.
Posted by Sheila at 8:56 PM

I've tried sourdough before but never had much success until I took the GNOWFGLINS ecourse on it. They too advised throwing out half the starter each day until it was very active. Another trick I learned there is to add the water first and give it a good whisking or stirring to allow a lot of air in. Then the flour to thicken it up. I have a thriving, bubbling starter and I use it every day now. It's so handy to be just a few steps away from bread, pizza, pancakes or cakes. Did you see Ann Marie from cheeseslave just posted a sourdough bagel recipe? I printed it today and hope to try it soon.

What's your favorite regular bread recipe? I'd kind of like to do a boule, and then maybe a French bread of some kind ... but first, I should probably attempt some kind of "plain old bread." And make a Reuben sandwich because I suddenly REALLY want one.

The real thing that regenerates my starter is making pancakes. My recipe has me dump my whole starter into a bowl the evening before, feed it, and then put what I'm not using back in the jar. It seems to let a ton of air in, and the whole thing gets really puffy and foamy. It really is just like champagne right now!