I didn't really "nest" last pregnancy. I made a couple of extra meatloaves, chucked them in the freezer, and called it good. I was too exhausted from work to do much else.

This time, I don't really see why I'm not more tired. Marko doesn't sleep through the night more than half the time, and when he does, I still don't. It's common for me to wake up every hour or two, and then get pulled out of bed at 5 a.m. to rock him in the (vain) hope that he will go to sleep again. I rarely get eight hours, and it's never in one go. Ever.

And yet, once I'm well up and have had some breakfast, I start feeling this crazy zing. Half energy, half anxiety. I have a long before-baby to-do list, but I don't often get to cross things off on it. (Though sometimes I spend a lot of time staring at the list, trying to think what I can add and then do so I can cross something off.) Most of the items are either shopping (which I can't do on the average weekday, not having a car) or it's way too soon to do them (like making laborade). I know I've got 11 more weeks, but it feels like time is just ticking away on me -- seriously, this pregnancy has flown by -- and I'm going to turn around and find I'm in labor and haven't done a thing on my list.

Meanwhile, I have the same anxious feeling about my garden. I know I'm going to be tired and uncomfortable as the due date gets close. But the due date is almost exactly the last-frost date. There's so much I am going to want to plant right then! I want to work ahead on the garden and get it all done now ... but it's February. So I can't.

What do I do with all this nervous energy? Laundry? Ha, no. I do random things that my brain fixates on and declares, "This is a good idea." Usually it isn't particularly.

For instance: last October we had a really big snowstorm and our whole yard was covered in fallen branches. After a month or two a friend came with his chainsaw and got the big stuff, but the smaller stuff was still everywhere. But no one had the inclination to do anything about it until suddenly a week or so ago I looked at that back yard and said, "It looks so awful! How is the grass ever going to grow through this? What about the tulips? What about having a place to play?" So I decided that every day I'd pick up a little bit of it, being careful not to do too much on any one day, so that I wouldn't strain my back.

About two hours after I'd made this decision, I'd cleaned up the whole yard and made three massive brush piles. On subsequent days, I raked up all the loose twigs and leaves in the yard, dragged the leaf piles into the front yard, piled them on my garden beds, made brick edgings for the beds, etc. I just ... can't ... help myself.

With the yard all clean, my eyes lighted on our shed. Our hideous shed. I've wanted to paint it for a long time. So I poked around in the cellar to find some leftover exterior paint. My only choices were the original color (turns out that's "celery green") and white. So I chose white. (What I really wanted was to paint it barn red, with white trim. Unfortunately that paint was not to be found, and since painting the shed is, like, 20th on our home improvement priority list, I couldn't exactly justify buying the paint.\ 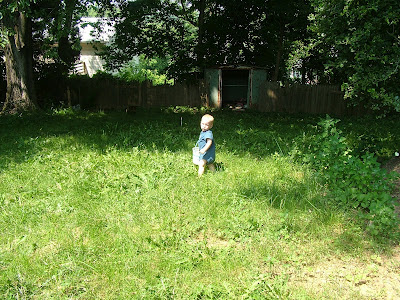 It actually doesn't look so horrible in this picture. But everything looks worse now that it's winter.
I wasn't 100% sure how the paint would look, so I decided to just do the trim, which was already white so it wouldn't even show. Ha. It showed. It looked terrible, nasty rusty celery green with BRIGHT white trim. So what can you do? I painted the rest of it, too. Now the whole shed seems to glow. Luckily I already have a plan to grow morning glories all over it ... hopefully that helps.

The worst part was wondering how I was going to explain to my husband that I kind of sort of accidentally painted the shed. I couldn't help it, your honor! I was pregnant at the time, which means it sounded like a really good idea that totally couldn't wait till the next day to get my husband's opinion on! However, I'm pretty sure he's seen it and hasn't noticed. (If you're reading this: sorry it looks kinda awful. I could paint it again!)

The other place my nesting instincts have kicked in is in the kitchen. I just have to bake, pretty much every day. Sourdough boule! Baguettes! Pancakes! Blintzes! My cravings tag-team with my nervous energy and force me to reach great heights in the kitchen. For instance, I wanted a Reuben. Which meant making sourdough bread (this recipe -- takes a night and a day, be warned), sending my husband to buy roast beef and mustard, and digging up the can of sauerkraut that's been sitting in the cupboard for six months and was my inspiration for the whole thing. 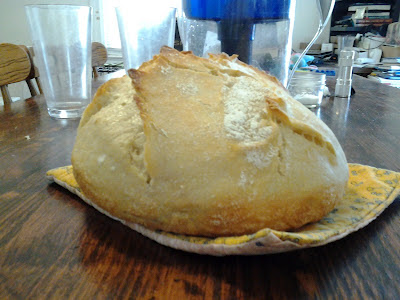 A different day, I wanted lasagna. I had pretty much none of the ingredients required for lasagna. But why should that stop me? I made homemade ricotta (actually quite easy) and homemade egg noodles (actually really hard) and made something like sausage from ground venison. There was nothing in there that wasn't made from scratch, unless you count tomato sauce because I didn't smoosh the actual tomatoes for it. Or, well, I guess you can't count the mozzarella either because I don't know how to make that. Still, I was pretty darn proud of my lasagna -- and it was delicious.

Once I had made the sourdough bread for the first time, I just couldn't be satisfied with Reuben sandwiches. What I wanted was something I used to have as a kid: when we would go visit my grandparents, my grandma would always serve homemade sourdough bread. Everyone would have it with apricot jam, except my grandpa. He would have it with sour cream and marmalade. So of course I picked up on that and ate it that way too. (I would do anything to be like Grampy, up to and including turning down apricot jam.) So now when I eat sourdough bread, I start craving marmalade.

Again, no marmalade around the house. Starting to feel guilty importuning my husband to stop on the way home and spend our precious grocery budget on random things I suddenly crave. But we did have oranges! So I made homemade, lacto-fermented marmalade. (This recipe produces something that's more like orange slices swimming in liquid, which doesn't go well on toast. So I ran it through the food processor, and now it's more marmalade-y.) We did have sour cream, but why do anything the easy way? I strained my homemade yogurt and used that, for a 100% homemade, 100% fermented result.

I admit this is not the best use of my time. I may look like the mom who's "doing it all," but on my baking or yard work days, the house starts to look pretty darn bedraggled. Marko enjoys my projects, mostly (keeping him from touching the wet paint was kind of a chore), so I don't feel I'm neglecting him, but it is rather sad to come out of the kitchen with my delicious bread and marmalade and see books and toys scattered everywhere. Plus the kitchen itself looks like a bomb went off. Sooooo perhaps I could find a way to apply this energy to cleaning the house?

Here's hoping. Meanwhile, I only have 11 weeks to buy a carseat and order more cloth diapers and make some food for the freezer and set up the crib and figure out what Marko's going to sleep on and order the birth kit and collect homebirth supplies and and and and .....! Wish me luck.
Posted by Sheila at 8:06 PM