Do we get to eat gluten today?

Welcome to the January 2012 Carnival of Natural Parenting: Experiments in Natural Family Living

This post was written for inclusion in the monthly Carnival of Natural Parenting hosted by Hobo Mama and Code Name: Mama. This month our participants have reported on weeklong trials to make their lives a little greener and gentler. Please read to the end to find a list of links to the other carnival participants. 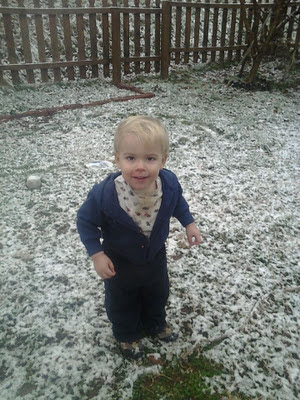 For the past month and a half, I've been obsessing about gluten. As a relatively healthy person who can eat pretty much anything without noticeable ill effects, I never thought this would be me. And yet, when you've got a kid who isn't feeling good -- you obsess about everything.

It started around October, I think. Marko had some diarrhea and was really crabby. For awhile I assumed it was all the fruit we were eating. So I cut down on the fruit and even eliminated it for awhile, but the diarrhea remained. Then it brought a rash, a nasty, bleeding one. To avoid irritation, we went diaper-free for awhile. Yes, I did say "diaper-free" and "diarrhea" in the same paragraph. That was not a particularly fun phase. And it lasted a solid month.

Sleep suffered. He went from sleeping through the night to waking up once, then twice, then three times a night. A few odd marks appeared on his body, some looking like blisters and some more like burns.

I know my kid is prone to food sensitivities. So of course that's what I thought of. But we hadn't introduced anything new, except grapes, and I'd long since stopped giving him any. I was weaning him, but not quickly, and he was still nursing twice a day.

That meant we had to go back on the elimination-diet wagon. I really hate elimination diets. But they always seem to bring us results!

First we tried dairy. That was the obvious choice, because he had gone from one cup of milk a day to more like three, and I figured that might just be too much for him. After days of almond and coconut milk -- and rejected sippy cups -- and none of his favorite foods (cheese, yogurt, sour cream, and cream cheese), I had to admit it wasn't working worth a darn.

So I gave him back his beloved "happy cow milk" (the carton has a picture of a happy cow; Marko LOVES cows) and set to cutting out gluten. Since it's pretty much in everything, that meant I had to make everything from scratch, pretty much. And that's what I did. No more PBJ's, no more noodles with tomato sauce, no more crackers.

In 24 hours, the diarrhea was gone. Within days the rash was healing beautifully. Within a week, the blisters and burns had vanished. Best of all, he was suddenly sleeping through the night again. And I said to myself -- uh oh. This is going to mean we have to stick with it.

And we have. Like glue. It hasn't been fun. Marko sees a picture of bread in a book he's reading, or glimpses bread in the fridge, or sees me sneaking a bite of pasta when I thought he wasn't looking, and he instantly demands a sandwich. He loves sandwiches; they were always the surefire option if he was feeling picky.

But a few odd things did happen. Like when I gave him hot dogs and ketchup, both labeled gluten-free, and he had some diarrhea awhile later. Or when he grabbed a bit of pie crust off the counter and scarfed it down, only to suffer no ill-effects. Could I have been wrong about the gluten?

I very easily could. The problem with elimination diets is that it's hard to eliminate just one thing without making other changes. Especially when it something big like gluten, it usually leads you to buy less processed stuff in the first place. I was making everything from scratch. So there were dozens of additives we weren't eating. Every time I gave him something I didn't make -- the hot dogs, the ranch dressing he dipped his chicken wings in, or the hot sauce I used to convince him he was eating Taco Bell like the rest of us -- we had issues. A rash on his face, a midnight scream-fest, an unexpected bout of crabbiness. Nothing you could really be sure about, but there did seem to be a pattern.

So I decided to test it, once and for all. We would just test gluten, not yeast and not store-bought bread. I made homemade biscuits and let him eat all he wanted. And he was fine.

And then a day later he went back to waking at night. I cut the gluten back out, but he's continued doing it. Yesterday and the day before, I gave in and gave him gluten because he has been fine in every other respect -- no diarrhea, no rash -- and because the night waking seemed to be unrelated. And you know what? Last night he slept through the night.

I think it's time to conclude I have no idea what caused that diarrhea. He's eaten all kinds of crazy things since Christmas, and hasn't had a recurrence of either the diarrhea, the blisters, or the rash. Just the nightwaking which is probably unrelated in the first place.

I am convinced to avoid food additives whenever possible. When he doesn't eat them, things definitely are better. But I don't think gluten is actually a problem. I'm still keeping my eye on yeast and tomato sauce, both of which seem correlated with problems (though fresh tomatoes have always been fine), and yet I'll have to wait for things to stabilize out a bit before I can test either of those and be sure.

It's an awful feeling of powerlessness, watching symptoms take hold of your child and then leave, and not being able to figure out what caused them to show up or what caused them to go away. I love to find answers, but I'm realizing more and more that I know very little about what's going on in my son's insides. I suppose I should be happy that he's feeling a lot better than he was -- and I am. I just ... wish I knew why.

Visit Hobo Mama and Code Name: Mama to find out how you can participate in the next Carnival of Natural Parenting!

"Yes, I did say 'diaper-free' and 'diarrhea' in the same paragraph." Sorry, but I just had to chuckle at that one. Poor you!

Man, I have no idea what to recommend. I've fortunately never been in a position where I've needed to try an elimination diet. They sound just as frustrating as you describe!

It's like you have to be a detective - examining each clue, testing the hypothesis. Lots of trial and error. All while your little guy is suffering. Not a fun process at all, and I certainly don't envy you. It is great that you are really taking the time to figure it out, and to learn about what exactly goes into our store-bought or processed food. Good luck with this - I hope you find your answers.

That sounds so frustrating :( My son reacted badly to tomato products and Stevia as an EBF babe, but he grew out of both. The tomato products gave him a nasty rash on his bottom, and Stevia gave him bumps on his face. I hope you find out what is causing the discomfort fir your little one!

wow!! i must say that with baby no. 1 i was lucky that i never had to try elimination diets. crossing my fingers that i will be just as lucky with baby no. 2!! good luck and hope you find out what's causing the diarrhea soon!

I've been interested in trying gluten-free but yeah, I think it will require A LOT of planning on my part.

GOod luck with everything.

"It's an awful feeling of powerlessness, watching symptoms take hold of your child and then leave, and not being able to figure out what caused them to show up or what caused them to go away. I love to find answers, but I'm realizing more and more that I know very little about what's going on in my son's insides. I suppose I should be happy that he's feeling a lot better than he was -- and I am. I just ... wish I knew why."

I can SO relate to this! I went on an elimination diet when my son was 3mths old and we've been gluten, dairy, and soy-free since. We've had a few unsuccessful reintroductions -- it's so hard to know. He seemed okay with wheat (although I felt HORRIBLE) and then he was cranky.

Marko's issues sound kind of like my husband's. (One example: He can eat homemade pizza but NOT any kind of commercially produced pizza. So we know it's not wheat, sugar, cheese, yeast, tomatoes, canola oil, basil, oregano, garlic, onion, etc, but we have NO IDEA what it actually is.) I can't imagine dealing with similar issues in a baby who can't communicate how he's feeling or understand cause and effect enough to know why he can't have his favorite foods.

I keep wondering if it isn't in the way they are processing and creating the tomato sauce? The yeast could by that he already has a high level of yeast in his body? Have you tried a probiotic? I'm not a dietician but I feel awful that your little guy is going through this. Hope you can find a resolution though that works for all of you. We have a little one with food allergies as well and it is horrible to have to sneak a banana (I know -who is allergic to banana!?) and have him see it and want some.

I've been working on going gluten-free (slowly) and I empathize with how difficult it truly is. Compounding that with a sick child, and it must have been an incredibly trying situation for you. I hope that all this has passed and you don't ever have to go diaper-free during diarrhea again :)

Noxious things in many processed foods:
Sulphites
Nitrates (esp. in salted pork type things)
Benzoate
Glutamate ("msg" --- also in tomatoes and seaweed)
... those are the really famous ones for being trouble, anyways.

Well, whatever it is, it seems to be back. We've been eating gluten again for three weeks, and the past four or five days he's been slowly getting diarrhea again. So I'm in a puzzle:

1. Does it just take gluten a long time to have an effect on him?

2. Was it something we've had recently, like the pretzels (store-bought) we've have around lately?

3. Or maybe it's because he's been drinking way more milk than usual lately? He had four small cups of it yesterday, when some days he has none, and he definitely had diarrhea by evening.

In any event, that's the only symptom. Today I ran us out of fluid milk, making it into yogurt (which he normally eats vast quantities of with no problem) and we'll see if that resolves the issue.

Nice to see so many others have gone through the same struggles.