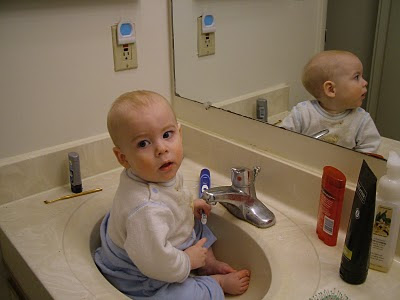 *Green stools, diarrhea, extreme constipation
*Nursing strikes, nursing aversion, hunger strikes
*Behavior problems, hyperactivity, tantrums
These are just a few things that might appear suddenly when a child, particularly a baby, has had a food he is sensitive to. It might be nothing; it might just be the way the baby is normally. I mean, what baby doesn't have "sleep problems," by adult standards? But if these symptoms appear suddenly, and they're a big change from the way he normally is, they may be a warning sign.
How to identify and cure
When you see these warning signs, start keeping track of them right away. A food journal is really helpful, especially when your mind is full of naptimes, change times, mealtimes, and so forth. Write down what the baby has eaten and what symptoms he has each day.
Depending on how severe the problem is, there are a number of courses you can take. If it's mild, you could try cutting out one potential allergen at a time and seeing if it helps. Eliminate it both in baby's food and in your food if you are breastfeeding. Give it at least a week, preferably two, before adding it back in and cutting out something else. The downside of this approach is that it takes forever, and it won't help if the baby is allergic to more than one thing.
A more effective approach, for a more serious problem, is to eliminate all of the most common irritants: cow's milk, wheat, corn, peanuts, cruciferous vegetables (like broccoli and cauliflower), onions, garlic, spicy foods, tomatoes, chocolate, citrus, caffeine, and soy. Give it a few weeks. Milk, the most common allergen for babies, may take three weeks to get out of baby's system. You'll need to eliminate ALL foods made from these products, including all dairy products. It will be rough! But, if you see improvement in your baby after a week or so, it will encourage you to keep on. Once the baby has improved, you can start adding things back in. Consult your food journal to see what symptoms were the most common, and watch particularly for those. It takes 2-24 hours for a food mom eats to appear in her milk, and may take another day to cause symptoms in the baby, so it's probably best not to reintroduce foods more closely than every other day.
If the problem is very severe and you're in a rush to cure it, you can do what I did for a brief time and go on a very limited diet. Pick one meat, one grain, one or two veggies, and one fruit, and eat those for a few days. If there is no improvement, switch to a different meat, starch, veggie, and fruit. Don't stay on this diet for too long, or you run the risk of vitamin deficiencies. When you do see improvement, start adding foods back in, starting with the ones you eat most often or the mildest foods.
With any elimination diet, if you cheat at all, you have to start all over. That means that you should probably do it at a time that you can make all your own food instead of eating out, from boxes, or at other people's houses.
This is a lot of work and very difficult, but, if the child suddenly perks up, stops fussing, starts laughing, and his rashes and sniffles go away, it's definitely worth it. And if not, at least you know you've ruled out that possibility.
Some people believe food sensitivities can be healed in time using the GAPS diet. This is a diet intended to heal a gut that has become too porous and is "leaking" allergens into the bloodstream. I haven't tried it, but it may be useful, especially for a child who has multiple allergies. You can avoid tomatoes forever, but when a child is showing up allergic to wheat, dairy, nuts, eggs, and who-knows-what-else, there may be something wrong in his digestive system that is causing this.
As for Marko? His cough is not gone yet, so we'll give it a few days, and not add anything new into his diet for a bit. I'll let you know if we manage to get rid of that cough!
Posted by Sheila at 10:16 AM

Very well written and informative. I have done a lot of research on food sensitivities as well because I discovered when my son was a couple months that dairy in my diet was affecting him (through breastmilk). He will be 2 next month and he is still sensitive to dairy and soy. The biggest signs for us were frequent night wakings with tummy cramps and excessive spit up. It is tough finding foods without these additivies so we eat very wholsecome, natural foods. The allergy specialist calls it a "protein allergy" and suspects he'll grow out of it.

Very informative! I`m going to add this to my next Sunday Surf. :D

Alicia, I do hear they grow out of protein allergies eventually. Sure would be easier on you guys, seeing how dairy and soy are in so many things!

I, too, look to food as soon as I notice my son is extra fussy or etc. I am wheat-, dairy- and soy-free for him right now. I always look to food first, although I'm very careful and eat only whole foods now so it's unlikely he would really get any of those. I wonder about other things though.