Having a dog is no picnic 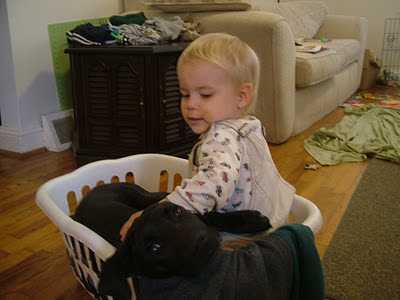 I always had pets growing up. Fish, birds, hamsters, and cats. And I loved them all. You feed them, you give them water, you watch them, and if you want to ignore them a little, they will be fine. If you want to go on a long weekend trip, you can fill up an extra food bowl and your cat will be fine. If you are gone all day, your cat will still love you when you come back.

Our dog is kind of a pain. He always wants to be with you. And with you means on your lap. He is by no means lap-sized, but I can't sit on the floor without him sloooowly edging into my lap. If I put him in his kennel, he whines. If I put him outside, he digs 847 holes and tears my compost pile to shreds. And if I ignore him, something always ends up getting destroyed: Marko's toys, two spatulas, my underwear, diapers (usually dirty, nasty ones).

I suppose I should be thankful. He is now potty trained, so as long as I remember to take him out every six hours or so, he won't go in the house. And he will go to his kennel when told to do so ... and after a little complaining, does go to sleep. He's not a bad dog. He's pretty much an average dog.

But he takes a heck of a lot more attention than a cat! I try to keep anything chewable out of his reach ... but, hello, we have a toddler. With a long reach. Who likes to take toys and kitchen implements and clothes and present them to the dog for chewing.

Then Marko dances around with a stick or toothbrush or spatula yelling, "Hit de dog! Hit de dog!" So that has to be stopped.

Then they both insist on sitting in the laundry basket, on top of all the clean clothes, where there is not even close to enough space for them. So they shove each other until the basket falls over.

Then the dog starts rolling around the floor biting himself (one of his favorite and most idiotic activities) and Marko has to be a part of that. So he shoves his head into the dog's belly. Which usually gets him pawed or scratched or bitten, and there are tears over that.

And then I separate them. The dog goes in the kennel (for his own protection!) and Marko stays outside. And oh, the tears! The drama! Want doggieeeeeeee!

Pretty soon, though, he is cheering himself up by taking all his foam puzzle pieces and dropping them into the kennel, where the dog is chewing them to shreds. Delightful.

Every morning, the first thing Marko wants is Gilbert. He sometimes wakes up in the middle of the night and demands Gilbert. If Gilbert is out, Marko wants him to be in. Or we all play outside and the two of them ignore the 97 million sticks in the yard and fight over the same stick.

No, having a dog is not at all like having a cat.

On the other hand, Marko is as thrilled to have a dog as it is possible for a little boy to be. So I guess I can't complain that much. I wanted our little boy to have a dog of his own, and he's got one. But it sure is a lot of trouble.
Posted by Sheila at 10:38 AM

Ha ha, never a dull moment with a dog and a toddler in the house. Your post made me smile. You are much braver than I, our 3 year old and 2 year old have started asking for a dog. So, I have made a new rule. No dog until everyone in our house can poop on the potty! Who knows when that day will come, their little brother is 7 months old and we are a young Catholic family :) For now they get to go to Aunt and Uncle's and play with their hyperactive German Shorthair. Hopefully that will buy me some time. The kids' pleas are wearing DH down.

I love the line about the 97 million sticks! It seems that dog is really boy's best friend in your home. =)

I probably will never get a puppy again, they are a LOT of work. And with a toddler too? No way. He's a lab? Mine's a lab mix, they can be a handful! But when he's older he will be the best companion.

We thought briefly about getting a dog, then decided it wasn't worth the expense at this point. Reading your post gives me more reason to think a dog would not be good here right now!

It is great for him to have a dog around. And John loves him of course. But I sometimes wish we'd gotten an adult dog. Puppies are so hyper!

John does say he'll be mellower once we get him fixed. I sure hope so!