Marko has some news for you... 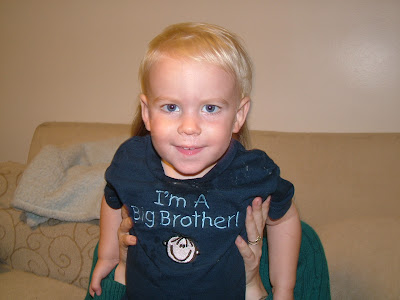 How's the for the ultimate no-blogging excuse? Sorry I haven't been blogging, I've been too busy gestating a small person.

So, for the details:

Due date: May 4th

Symptoms: Up to this past week I've been cheerfully telling everyone that I'm much less sick this time. But it's catching up to me, and I really haven't been feeling so great. There's two different kinds of queasiness: morning sickness and "afternoon sickness," though either one could happen whenever, depending on conditions. When I haven't eaten, usually in the morning, I feel all queasy and not at all like having breakfast. And when I have eaten, usually in the afternoon or evening, I feel over-full, with heartburn and indigestion. Eating the right things (whole wheat bread, dairy products, eggs, and raw vegetables) and avoiding the wrong things (meat, anything spicy, or anything greasy) seems to help. It helps that I remember what things were good and bad last time, and it seems to be the same this time.

I'm also exhausted. So I've been napping during the baby's nap almost every day. Unfortunately, that means I have no time to get anything done, because when Marko is awake, he has so many demands. To make things worse, he was going through a really cranky stage for a bit there, and then got a cold! But he's been feeling better the past few days, thank goodness.

Marko: He doesn't have a good idea what's going on, though we have told him. The other day, he pulled up his shirt, pointed to his belly, and said, "Baby?" I said, "No, the baby is inside Mama's tummy," and pointed to mine. He said, "Outside?" I think he was kind of confused why I would keep a baby in there, and thought I should take it out so he could see it. No such luck.

I've decided to try to wean him, as gently as possible. On the one hand, I think he's close to ready, and on the other hand, nursing him has become excruciatingly painful. It was one of my first symptoms and is still getting worse. So he's down to about 0-3 times a day, and I try in particular to get him to sleep in other ways.

Sometimes I wimp out on this, though. He likes to go to sleep by being pushed around the neighborhood in the stroller, and will always accept that option over nursing. But when I consider hauling my exhausted self off the couch and walking around and around and around the block for twenty minutes, versus nursing him and getting him out in ten, without getting up -- well, sometimes I do pick the easy way out. I will take pain over physical activity eight times out of ten, all other things being equal. But I've been trying to bite the bullet and get my exercise and get him to sleep at the same time.

Plans: Still working on that. I want, more than anything, to have a homebirth with a midwife. But that costs money. Less money than a hospital birth, but insurance covers the hospital birth. And yet, if John doesn't have a job at the time (he's set to lose his at the end of the year), I don't know how we'd handle the insurance, either. We're just going to have to make some phone calls and figure out what we can manage.

Feelings: We are very excited. Especially me. I'm thrilled and dream about the baby often. Usually it's a girl, but last night was a very vivid one where it was a boy. I would like a girl, but maybe it would be better to have another boy first to be Marko's sidekick. (We all know that's what would happen!) But the thought of having two boys as energetic as the one I have is pretty scary. I'll take whichever!
Posted by Sheila at 5:53 PM

Congratulations! That's great. (Funny, though - our families seem to have similar timing. I think Isaac is only one month younger than Marko, and our baby #2 is due April 29.) Anyway, I hope everything continues to go well for you guys and that you feel better soon. Prayers for you and the baby, including the whole homebirth vs. hospital situation.

So excited for you! Blessings on you all.

There's a real good chance your insurance covers a home-birth with a licensed midwife. It just makes good sense for insurance, as it is much cheaper and has positive results. With three different insurance plans, our midwife was covered every time.

http://novahomebirth.org/providers/insurance.html
This site shows some questions to ask your insurance company.

According to this, http://www.virginiahomebirth.com/q_a.html insurance coverage is rare for home-birth (in Virginia; in Washington it is required), but Medicaid does cover. I don't know if this is a local provider, but I like her very much after looking at her site.

We already are pretty sure our insurance will not cover a midwife. It is pretty particular about its "network." However, we will not be on our current insurance when the baby is born (the Lord only knows what insurance, if any, we *will* be on) so we'll have to see what happens.

I do love that picture of Marko. He looks so cute, but also so much a little boy, not a baby.