Well, my fall garden is doing pretty well, considering how little attention I've been giving it! I've decided my 2011 garden is an experiment: How Little Can I Do in my Garden and Still Get a Harvest?

Pretty little. Since I planted some lettuce around the first of September, I have done nothing but harvest green beans and basil and water the lettuce a couple of times, as I remembered it. And things are actually growing!

The tomatoes look sad. I was going to pull them out but didn't get around to it. Then they miraculously came back to life ... but only at the ends. The stems still look completely dead, but some life must be passing through them, because green leaves appeared at the ends of the branches. These then flopped over on the ground, because they were way too high for the tomato cages. (Note: those cages aren't going to cut it next year. They fell over in every high wind and weren't close to big enough. I have a trellis idea in mind ....)

Now, they are actually bearing fruit. One is just beginning to turn red. I've heard that late tomatoes aren't as good as summer ones, but -- tomatoes! I miss eating fresh tomatoes ... especially because I can't stand buying them anymore. Not when they cost three bucks for a little container, taste like nothing, and come from unethical farms (probably). 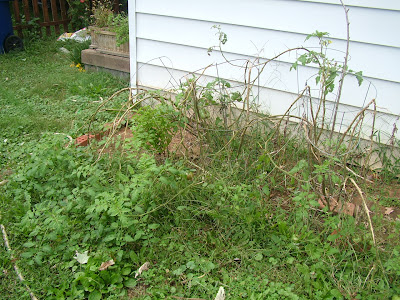 Those flopped-over tomato plants do get in the way of mowing, though.

The green beans are doing great! That is, considering I planted them two months late, and then all their flimsy string trellises broke, and then half of them got eaten by a groundhog. I'm not sure why he didn't come back for the other half -- maybe letting the dog dig around in them helped leave a threatening scent. But my four remaining plants are overproducing. Every time I'm out there, I see more beans -- and heave a heavy sigh, because I am tired of them fresh and have no time to blanch and freeze them. But I pick them anyway, and have managed to put up a few bags in the freezer. I know I'll want them later, even though they're the last thing I want right now.

I need to remember to wear long sleeves while picking them, though. They make my arms all itchy with their prickly leaves, and sometimes I break out in a rash. Also, next year I am definitely staking them differently. Not only was this method flimsy, but I can't get behind the plants to get the beans. I didn't realize beans like to fruit on the back, non-sun side. So you have to reach past all those prickly leaves to get the beans. Another tip is to pick them at the right time. Over-mature green beans are just not worth eating. I've started just leaving them in the hopes of maybe getting some dry beans, but I think they're just going to rot on the vines at this rate, as we've had a lot of rain. 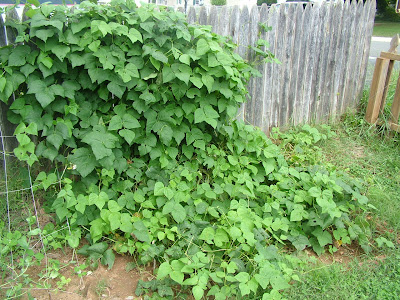 The peas that I planted in early August aren't looking too promising. I'm not sure when, if at all, would have been a good time to plant them in the fall. They just grow slowly, plus they suffered a bout of some disease ... to say nothing of occasionally getting romped all over by the dog and kid. Mostly dog. He likes to pull out the stakes and chew on them. It's not helping those poor sugar snaps. I doubt we get a harvest before frost. 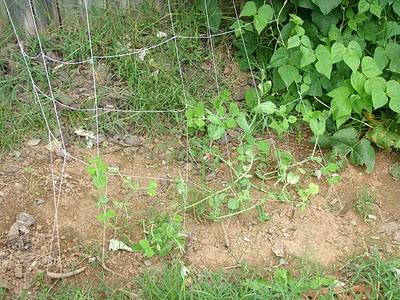 I am inordinately proud of my lettuce, though. I planted that patch several times. Once in early August, of which a few plants did sprout, but grew very slowly and then got eaten by grasshoppers and/or trampled by the baby and/or puppy. Once in mid-August, of which nothing sprouted. (I think I let them dry out?) And once in early September, of which four plants sprouted (out of my very heavy sowing) and are STILL ALIVE. They're growing much faster than the August bunch, too. I think they like the cooler weather and the frequent rain. Don't they look delicious? 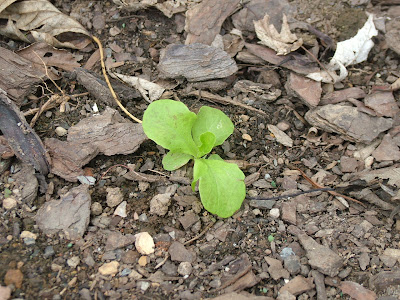 At our house, we mainly have iceberg, which I think is blah. This is a butterhead variety called "Mignonette," described as both delicious and heat-resistant. I think we'll stick with it.

I also did plant some spinach along with the lettuce. Not a single seedling came up. I wonder what happened? I also wonder if it would be worthwhile to try planting more now. We don't really have much growing time left, so I'm thinking not ... but I really should have tried planting it again when I replanted the lettuce. Ah well.

My head is so full of plans for next spring! And for the winter, to keep me entertained, I'm doing an herb pot. It's just a big pot divided into quarters: 1/4 basil, 1/4 oregano, 1/4 thyme, and 1/4 cilantro. My first attempt died (I took it outside for a few hours and grasshoppers ate all the tiny sprouts), so I have to try again. Luckily you can't run out of growing time for an indoor plant!
Posted by Sheila at 12:18 PM

Bean plants make my arms itch too. I find single poles (the taller the better) firmly planted, straight up, with a little extra piece of wood (as a brace) pounded into the ground at an angle, then fixed to the pole at the bottom works well for vining beans. Three beans planted around the bottom of each pole does nice. Challenging to find salvaged material for that. Poles of whatever variety are strangely hard to come by for free. Actually, technically what I've used are stakes, not poles, as they're square.

Try and find 'esmeralda' butter lettuce if you can. Wonderful. Haven't tried 'mignonette' but it's doubtless just as good. I grew lemon cucumbers this year. You really have to get some of those seeds. Easy growing and vigorous. Lots of them, and their size is perfect in that you don't end up with half a cucumber sitting in the fridge going to waste. Each typically gets used up at once. And they taste better than any other cucumber, hands down - crisp and meaty, never bitter afterbite. Never.

It has been a good learning year, hasn't it? Were your lettuce seeds brand new? I had to plant three or four times to get any to come up. The older seeds I tried wouldn't come up at all, plus I think I was burying them too deep. The new seeds ("Salad Bowl" variety) came up beautifully. I can bring some next time I see you if you want to try it.
Despite planting my fall beans far later than even yours, I was able to pick my first batch off yesterday. It's so cold now I'm afraid I won't get much more.

Hope you're feeling better, by the way!

Yes, they were new. I've heard lettuce seeds don't last past a year. I have been hoping I can get this batch to go to seed so I won't have to buy seed next year, but I think there might not be time.

Yes, I buried my first batch too deep, too. The next time, I just put them in a furrow and dusted them with a tiny bit of soil ... so they weren't really buried at all. I had read that some lettuce seeds need exposure to light in order to sprout.

Oh, and I am feeling much better! I'm off to go post about my secret morning sickness remedy that solved everything. ;)

Arpita of Up, Down And Natural said...

Ohh, if I wrote everything I'd buy if I had a money tree it would be a whole other post! Being that we're entering year four of TTC our first I spend LOTS of time day dreaming of gorgeous cloth diapers, baby carriers of every color and style, and entire wardrobe that would put Paris Hilton to shame! You're right though, most of this is just for me and what *I* want as a mama... It has very little do with what they need as I'm sure a babe would happy with homemade cloth diapers, but where's the fun in that! PS- I have a wicked make your own Moby wrap tutorial on my blog! ;)