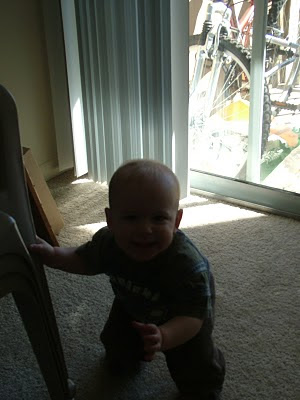 I know that my blog tends to be very sunshiney. Either I talk about how awesome my life is, or I talk about abstract things. And there's a reason for it -- my life is awesome, awesome enough that I don't feel like I can really complain about the less-nice parts because they're so far outweighed by the wonderful parts. Reason #2 is that when things are horrible, there's no way I'm going to have a chance to write a blog post about it.
But, just for the sake of 1) reminding you that I am not the Uber-Mother and 2) making you laugh and feel grateful you are not me, here's the story of what I've been doing lately. 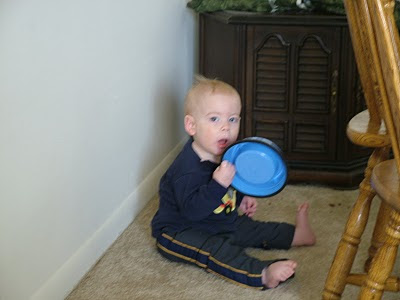 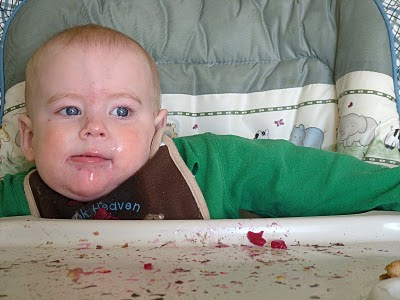 Because, yes, this morning I discovered he had cut a new tooth! All the tooth fussing was so mixed in with sick fussing, we didn't suspect a thing. 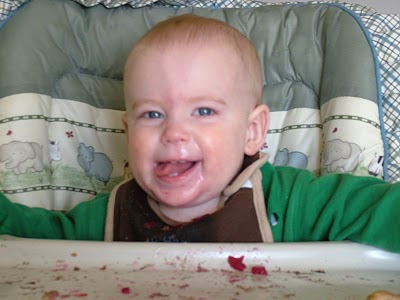 That wasn't the only new development. Last night, after his bath, he was feeling a lot more cheerful. John held him up to let him stand on his own (something he's done for awhile now). He stood there a second and then walked right over to me! About four steps! On his own!
So, that was a gratifying moment to help balance out the yuckiness of the past week and more. He's been rather demanding today, but nothing like he was. It's funny; despite how miserable it is when he's unwell, those times seem to bond us all the most. Now that he's feeling a little better, the smallest smile is just a ray of sunshine! 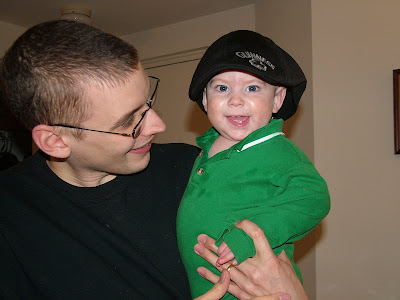 But I'm a little sad, too. My kid is walking. Toddling. If he doesn't count as a toddler yet, he will very soon. Babyhood is coming to a close. I like babyhood. I know babyhood. I don't know anything about toddlers. I'm afraid I'll make quite the hash of it. I like snuggling and nursing; I'm not much into playing really. And already the baby (toddler?!) is getting bored. This morning he emptied out the bathroom cabinet, one kitchen cabinet, and one bookshelf before getting grumpy and wanting to be played with. So I stacked his cups and let him knock them down, but he quickly got bored with that and I was stuck.
I just miss my easy-to-please, teeny-tiny, cuddly baaaaaaby! 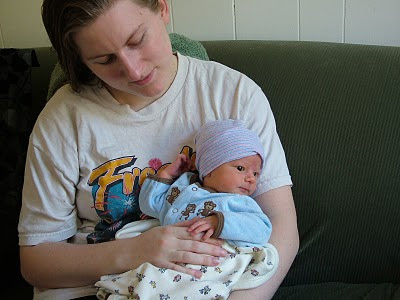 Can you believe he was ever this small?
Posted by Sheila at 5:12 PM

Oh Shelia! I'm so glad you're ok. When I first had my son, I too was worried about any stage that wasn't the snuggly baby stage. Toddler-hood can be tough, but they're so, SO cute at that stage! And their increasing interaction is just amazing. And when they get older - it's even better!

The first thing that came to mind was this great tip for picking up small shards of broken glass:

Use a piece of white bread to wipe down all the surfaces. It picks all the glass up like a dream!

I don't have any toddler advice, though. =P

Wow, that anonymous comment really stings. I guess that's another reason why I might be less than honest about the negative moments. But really, I did not say one negative word about my husband or child in the post. So maybe they didn't read it.

On the bright side, I believe this is the first really insulting comment I have ever received. I know people who get tons of them. So I should thank my lucky stars that the jerks tend to avoid my blog!

Tiffany, thanks. My mom just sent me a HUGE email full of ways to play with a toddler! I feel much encouraged. This stage is going to be fun too.

Enbrethiel, I had never heard the white bread trick! Definitely going to try that next time!

Oh he was such a cute newborn!! Look at that bright little face.

Odd coincidence. I've been up the entire night with my 7 month old four nights in a row since she will only sleep while nursing and/or upright. I'm about over it. I'm also getting sick too (but just a cold i think). And husband's had to work late last 2 nights... grr.

Hang in there. Toddlers are a lot of work but they are sooo funny it's totally worth it. I'm on my 5th toddler. Gets better every time.

Did not read was my guess, too; I mean, "putting down"? Quite the opposite!

I don't remember much of my own toddlerhood, nor of my younger brother's. Hide-and-seek comes to mind, but ... yeah, I dunno. You'll figure something out between the three or four of you. I seem to recall there was a cat ...

Sheila, I ignored the anonymous comment when I first read it (although my blood boiled on your behalf!) just in case you planned to delete it. It has become quite fashionable in some parts of the Internet to put Mommy blogs down, and I think the commenter was just riding that wave. I have a feeling she is leaving similar comments on all the Mommy blogs she can find, maybe even using the linky of a popular hop to find her targets. There is probably some mental imbalance at work here, too, so I hope you don't lose too much sleep over opinions like hers.

Sarah, he was the cutest newborn EVER. At four days old (in that picture) his eyes were wide open and he was so alert!

There seems to be a wave of sickness going on. I blame the weather -- looking like summer for a few days, then getting cold again. Luckily we seem to be kicking the last of it, and the weather's warming up again, too.

S.g.o.t.s. -- there IS a cat, and he has been chasing her all over! She has been taking refuge on the back of the couch, because it's the only place she's safe. ;)

Oh, Sheila, I'm sorry you've been having such a miserable time! Marko looks like he's back to high spirits. Look at those teeth!

I think you should delete the anon. comment. It's like some drunk guy walking up and barfing on you on a public bus.

Anyway, I'm glad to hear that no one was hurt by the pyrex. My mom has incinerated dish towels and tea kettles and yes, once cracked a pyrex dish in half by putting it on a cold surface. ^_^ Apparently I'm absent-minded too, so I'm sure I will be doing more of this sort of thing.

"It's like some drunk guy walking up and barfing on you on a public bus." LOL!

Yes, I take after my mom in this respect. When I told her about the Pyrex, she started telling me about the time she shattered a jar of molasses! How in the world do you clean THAT up?