So, the baby turns ten months today. Can you believe it? His first birthday is only two months away! He's practically a toddler!
Sniff.
He's been very curious lately. His favorite things include looking at himself in the mirror, turning light switches off, opening cabinets (and rooting around inside), cruising around everywhere by holding onto the couch or the wall, really crawling (I mean on hands and knees instead of elbows and stomach) at last, and easily pulling up on things and lowering himself back down again.
Right now he is emptying a box of memorabilia and stationery onto the floor, paper by paper. I could stop him, but I think it's easier to use the time for blogging and clean it up later. After all, if I move the box, he'll just find something else. I recently got some new diaper covers for him. They're called Proraps and I like them a lot. At about $7 each, they're quite economical, especially compared to more famous brands like the Bummis Whisper Wrap (which they're almost identical to). I bought four of the large size, to see if I liked them, and it turns out that's pretty much all I need. With a polyurethane lining, they don't absorb smells like our vinyl pants do, so I just wash every couple of days when I do a cold load -- or whenever they get anything on the elastic edge. They have a Velcro closing, which I find extremely convenient. And they hold the prefolds in place without pins -- definitely a plus! With how wiggly this guy has gotten, I was getting afraid I'd stab him with a pin sooner or later. These covers have definitely cut my diaper changing time down, and they also leak less than the vinyl pants. In fact, the only leaks I had were out of the leg holes at the beginning, probably because he was only about 20 pounds and the large size are supposed to start at 24 pounds. I just wasn't going to get medium sized covers and use them for one month.
He really lost interest in solid foods for awhile there. I'd put him in his high chair and he'd just shove the food around and shriek, eating a tiny bit here and there, but then wanting out. Just the other day, I made beef stew and it all became clear to me. He'd been holding out for beef. I'd been having a lot of soup and other not-very-meaty dishes, and he wants beef. Pork is also a big hit -- he ate at least a grown-up serving of it today.
I've reintroduced dairy products again in small amounts, this time without problems. I even found some goat's milk yogurt at the store, and it's been a real hit. He'll eat as much cheese as I give him, but I kind of hesitate to give him too much, especially considering he's not a huge vegetable fan. 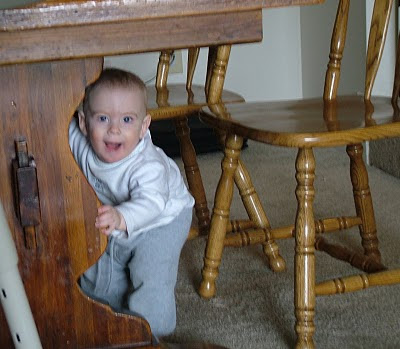 Sleep is my big obsession right now. I've realized that a lot of his occasional clinginess and grumpiness (okay, more than occasional, if I'm honest) is due to a lack of napping. He's a highly scheduled kid and only naps at certain times. My challenge is to watch for these times and get him to nap then -- while avoiding letting him nap too late (it interferes with bedtime). My obstacle is that we're in the car from six to six-thirty every day picking up John from the train, and an evening car ride is the perfect recipe for an evening nap -- which is something he is not supposed to get!
Ideally, his sleep schedule would go as follows: up at 6:30 (to go to the train station, this one's non-negotiable), nap at 10 (he always falls asleep on the way home from school), up at noon or one (I think one tends to result in less grump), nap from three and a half hours after his last nap ends (so 3:30 or 4:30) until five. Then he HAS to be up for four hours before he will sleep at night, so bed at nine. I used to try put him to bed at eight, but I've been finding lately that he sleeps way worse if he goes to bed at eight. As in, he falls asleep only for 45-minute increments or so, he can't sleep alone, but he can't be still either, he rolls over constantly and wakes himself up, then cries because he's awake, he climbs up on the bars of his crib, rolls into my bed, pulls my hair, and decides to be up for the day at 5:30. No thanks. Nine p.m. bedtime works much better -- he tends to be up about twice, around one and four a.m. And, insanely, I think I'm getting a good night's sleep.
It helps that I nap with him at least once per day, because he sleeps so much better that way. Once we have his schedule really fixed, he sometimes sleeps well without me, but unfortunately we never get to that point because every weekend messes things up. We go to church during his naptime, or he sleeps late, or what-have-you, and the whole schedule is messed up for days. Which means either he won't go down when he needs to, or (most often) he goes down but won't stay down. He sleeps for half an hour, gets wide awake, and then five minutes later realizes he's still tired but can't go back to sleep, so he whines for three hours while waiting for the next sleep cycle. Seriously not fun.
Lately that's been made worse by teething, but he's almost finished with this bout. One of his top two teeth is out, and the other is peeking. I miss his adorable two-toothed smile (and I still miss his adorable gummy smile), but this one's cute too. I can't really get a good picture of the new teeth, though, so you'll have to wait till they're a bit further out.
In other news, we've been continuing our search for a house. Further from the city, the prices are much better, and we've found many promising listings. Problem is, they all get snapped up before we can even go look! Though the housing market is slow in general (or so they say), houses in our price range actually are moving pretty quickly. Yesterday we saw a lovely little white house with green shutters that I'm in love with, and actually were able to put in an offer before it got listed, so hopefully that will work out. It seems almost too good to be true -- on a quiet street with a lot of families with children, within walking distance of the church, and a block away from some people we know! It is tiny, so it won't work forever (unless we added an addition) (that is, assuming we have more kids, which I fervently hope we do), but it has two decent-sized bedrooms, which is all we need for now.
Another two friends of ours have gotten married, bringing us more into a "set" of married friends and less the sole married couple among a bunch of single friends. We still do have single friends, though, and I'm glad for the variety. But it'll be exciting when (hopefully) our friends have kids too and we can have parties that include them.
And ... that's all I can think of for now, but I have more posts in the hopper that I've been planning out and mulling over. Sadly, the more mobile this baby gets, the less computer time I get. I've always got to be keeping him out of things, or else he wants to be on my lap and pushing all the computer keys. If it isn't one thing, it's another. But hopefully I'll get more good blogging time soon.
Posted by Sheila at 5:22 PM