Lately, Marko has not been what I'd call a good sleeper. All these trips really do mess with his routine, and to make things worse, we had to lower the mattress of his crib (he is pulling to a stand, and I was afraid he'd tip himself out). So even his less-favored sleep spot (second to my arms) isn't quite comfy.
I have no objection to sleeping with him in my arms, if it weren't that once he's asleep, he pushes me away and stretches out in MY sleep spot. So where am I supposed to sleep, huh?
This ended up being our solution: 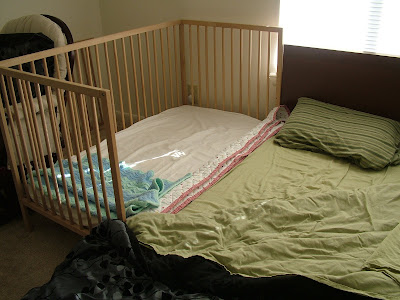 I've heard good things about Good Night Sleep Tight, but not having children I haven't tried it myself

One thing that may or may not help - cut out all caffeine from your system.

I am popping over from Kitchen Stewardship's Test Your Grains Challenge :)

I almost never eat any caffeine, so I'm sure that helps.

Lily, I have not heard of that book, but I should try reading it!

Hi! I noticed that you got the same crib from ikea that we bought for our daughter...she is turning the big one very soon and we were looking into buying a little toddler bed for her, but I found out that with the sniglar crib from ikea you are able to convert it into a little toddler day bed and I saw your picture of your sons crib and got thrilled! My question is how did you convert it into a toddler bed? What did you take off? What did you leave on?

It's really easy. Did you have a big long bar that came with the crib, but doesn't fit on it anywhere? You just take off one long side and replace it with that bar at the bottom. The screws move into the two holes near the bottom. Hope that makes sense ... it was really easy once we started.