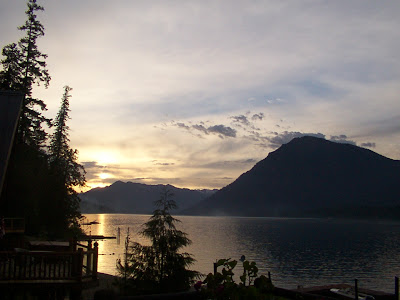 I've been meaning to write this post for quite some time. I didn't want to leave my grandpa without a tribute. But there's so much to say, and I feel I could never say it right. Even so, here's my attempt.
I've talked a lot about Grampy's military honors, his heroism, his big accomplishments -- building planes, running marathons, rescuing people. And I'm definitely proud of those things. It's likely what most people will remember of him.
But not me. I don't remember him by those things. I remember so many smaller things, but things that I think say more about him.
I remember the way he worked on the cabin they had by the lake. He decided to put stonework along the outside of the foundation. I was there that day and he let me help him. He taught me to mix the mortar while he selected just the right stones and fitted them together in his big, capable hands. You can see it now, the perfection of the work he did. But what meant the most to me was that he let 12-year-old me take part in what he was doing.
He was always that way. One of my first memories of him is of sitting on the exercise bike in his workshop, watching him cut, sand, and solder pieces of an airplane wing. He'd show me, step by step, how he did it, let me feel the sanders, give me scraps of wood to play with. Though he wasn't chatty, he never acted like he found me a nuisance. I'd stay there all afternoon, till Grandma called us to dinner.
At dinner, he always let me sit next to him, and would point out my seat beside him. It was he who taught me to enjoy marmalade and sour cream on sourdough bread and milk with my pancakes. He liked us all to hold hands during grace, and even when the rest of the family had lost the habit, he'd still hold my hand. My whole hand fit in the place of his two missing fingers, between his forefinger and his pinky. It was our special way of holding hands during grace.
When he hugged you, it was never just a little squeeze. Instead he'd grab you tight and lift you up a little bit, the kind of hug that makes you feel strong and brave. You could feel the rock-solid muscles of his back when he hugged you.
He and Grandma were both big gardeners, but Grampy's specialty was edible things. He would wander around his vegetable garden, tasting things and telling me what they were. You could go out and graze in that garden, and there were always good things to try.
He was an incredibly devoted husband. Grandma would say, "I wish I had lights above the kitchen counter," or "I'd like some towel hooks," and those things would be done. Not just done, but done perfectly. He made towel hooks carved like birds for Grandma.
It was Grandpa who taught me to look through a camera lens or a pair of binoculars and really see what I was looking at. He knew all the different birds on the lake; he could tell when the fish were jumping or a fire was burning on the opposite hill. He was an outdoors kind of person, the kind of person I want to be.
Though he wasn't Catholic till the very end, he was very religious and had great faith in God -- something he handed down to my mother and she handed down to me. Often he would go to Mass with the rest of us.
Grampy didn't think he was anything special. Paying attention to an interrupting grandchild, doing kind things for his wife, or helping out those in need never seemed like big things to him. But they were big things to us.
He won't ever be forgotten, and I feel a great burden on me to share with those who didn't know him the sort of amazing man he was. I can't really do it -- he was the sort of person you just had to know. But I'm going to keep trying.
Posted by Sheila at 2:22 PM

You really bring him to life here. Every time you write about him, tell a few stories about his life, his actions, his heart, it never fails to captivate me. I think that, next to my grandpa, he's kind of like the grandfather I always dreamed epitomized "grandfather." Maybe it's all the books I've read that portray them that way. Maybe you'll write a book about him one day! A children's book, perhaps. =)

Though I didn't know him, I can't help but think he's smiling down from heaven. For in my eyes, if you can remember a man fondly and the memory makes you smile, you have paid him the greatest tribute a man can get, living or not. And he lives, as long as he lives in your heart and on your lips. :)

Heather, he would be great in a book! Actually, I've been trying for a long time to convince my mom to write her autobiography. (She's a bit busy at the moment, living in Korea with four littles! But maybe someday.) It would make a great book. And Grandpa would be a stand-out character in that book -- like Pa is in the Little House books. I've been known to re-read those books just for Pa.

If your mom writes her autobiography one day, perhaps you could do an illustrated kids book for Mark, entitled something like, "We Can Do It!" with each mini-adventure being one of those memories of your grampy including you along. =P