What I've been eating lately

...because I know you're dying to hear! I have a lot of good ideas for long posts, but I haven't had any time to work on them lately, so this is a short(er) post to tide you over.

The first thing I've been eating lately is lacto-fermented vegetables. Pictured are sauerkraut, the last of the pickled beets (those went fast; they were really good!) and my most recent, cucumber pickles. This morning I packed some ginger & clove carrots, so we'll see how those go! 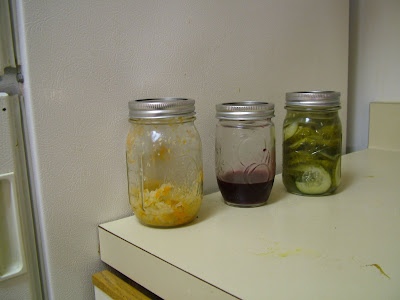 I'm finally getting the hang of lacto-fermentation, and I have discovered a few tips that no one ever told me.

First off, don't do what I did the first time: put the vegetables in the jar, then mix the salt, whey, and water together and pour in the top. Inevitably, not all the water will go in, and then you're left wondering if all the salt and whey you needed got in there. Depending on the vegetable, you might not need water at all (the juice may suffice), so add the salt first, then the whey, then the water. For the cucumbers, I sprinkled in salt after each layer of cucumbers, left them for awhile to get juicy, and then added the whey. I didn't need to add any water! For the sauerkraut and the carrots, I added the salt and whey in the mixing bowl before packing them into the jars.

Second, the recipes from Nourishing Traditions say to leave the jars out for 2-3 days, than transfer to the fridge, where the best flavor develops after six months. I just don't have fridge space (or patience!) to wait six months for the best flavor -- especially when you're wondering if they'll turn out at all! The Joy of Cooking suggests leaving pickles at room temperature for 1-2 weeks, and I find this preferable. You can taste throughout the fermentation period, and when it's over, the vegetables are ready to eat. You can stick the jars in the fridge whenever the sourness is just right. A week worked well for both the beets and the cucumber pickles.

Third, it's okay to taste as the fermentation goes along ... it won't hurt you! However, it's likely to be much too salty until it's been fermenting for awhile.

Fourth, any whey is fine to use as long as it contains active cultures. I forgot to mention that before -- many commercial yogurts no longer contain active cultures, so their whey is just sour water, no good for fermenting anything. Same goes for whey powder. But any live yogurt, like Activia or Stonybrook Farms, will yield plenty of whey if you strain it. (Or, make your own yogurt!)

Last, if you ever hope your husband to eat lacto-fermented vegetables, don't eat a slightly iffy batch when you've got morning sickness and then barf them up almost in his lap. No matter how many times I promise these pickles are okay, he won't try them. (I'm not sure if the barfing was due to morning sickness or to not putting in enough salt, but it hasn't happened again, in any event! A truly spoiled lacto-ferment will taste so awful you wouldn't dream of eating it -- much safer that way than home canning.) John is creeped out enough by the idea of eating something with living bacteria, so it was pretty much a doomed battle from the start anyway. I'm sure they'd do him good, but I'm not pushing it. That's why I do lacto-ferments in pints rather than quarts as all the recipes say ... a quart of sauerkraut takes a long time to get to when you're the only one who eats it!

In conclusion, lacto-fermentation is actually really easy -- easier, I think, than canning because no equipment is needed. All you need to do is put your vegetables in a glass jar along with 1 tablespoon of salt and 2 tablespoons of whey per pint. Mash them down with a spoon or pound with a meat hammer until the juices are released, and add water if necessary to cover the vegetables. Then put the lid on and leave in a warm place till it's as sour as you like it! This method works for most vegetables, such as cabbage, cucumber, beets, and carrots. You can even lacto-ferment salsa and fruit chutneys!

So, that's one big thing that I've been working on. The other is pumpkin. I recently bought a pumpkin, hoping to get a good price once Halloween was past. (The price was only decent -- 39 cents a pound -- but still, not bad.) Pumpkin is easy to cook: just chop it in half with a sharp knife (you can put it in the oven first for a few minutes if it's too hard to cut), scoop out the seeds and pulp, and bake the pumpkin for an hour or so. Then pull off the skin and puree the flesh. My hand blender managed it in no time, but a potato masher works well too.

That pumpkin puree goes well in pumpkin pie, pumpkin soup, pumpkin cookies, pumpkin bread, and many other things! I have one container full of pumpkin seasoned with molasses, ginger, cloves, nutmeg, and cinnamon, which I use as a topping for oatmeal, ice cream, or yogurt.

Here's the recipe for pumpkin soup, which I devised on a chilly day when I really wanted something warming.

Saute some onion and garlic ... a quarter of an onion and a clove of garlic should be about right. Butter is my favorite fat, but olive oil goes well too. Then add about 2 cups of milk and heat it to the scalding point, which is when tiny bubbles appear at the edge of the pot. Add about 2 cups of pumpkin (more for thicker soup, less for thinner) and stir till combined. Then season with some ginger and curry powder and eat! Serves ... me, all day long. I guess it was about three or four servings.

What are you eating this fall?
Posted by Sheila at 7:35 AM

Yum! Do fermented carrots taste pickly in the dill pickle sense? And can they be cooked after having been fermented or do you have to eat them straight or in a salad?

Also, any recommendations for molasses brands?

Oh, nevermind on the molasses. Just saw that you posted about it a few weeks ago. =)

They haven't fermented yet, but I believe they do. All lacto-fermented foods I've tried taste like they've been pickled in vinegar and salt, but a little milder.

You can cook lacto-fermented foods, but heating them over 130 degrees kills the probiotics. (The taste remains delicious.) I like them best in salads. If you want them cooked, you can cook slightly before lacto-fermenting (I only did this with the beets). But they also soften over time as they ferment. So, if you want crisp pickles, you should eat them sooner rather than later, but if you want to soften carrots, for instance, you would choose a longer lacto-fermentation period.

The best thing to do, if you like pickles in cooked dishes, is to add them at the very end. For instance, the carrots would make a good garnish to a curry, but I would add them right before serving.

As far as molasses goes, anything labeled "blackstrap" is pretty much equivalent so far as I know.

Oh, yum! I wish pumpkin were easy to get over here. I'd love to try that soup!

The concept of fermenting food is new to me. I just read another friend's blog post on fermented grains. He says he lets his oatmeal stand overnight with some yogurt in it. That's the first time I've heard of that, but I'm thinking of trying it. Do you do it, too, Sheila?

No, I don't soak my grains, though I have heard that it increases the availability of the nutrients. I don't do a lot of baking, and when I do, it's usually cookies -- I'm not looking for healthfulness so much.

If you'd like to find out more about soaking grains, I suggest Kitchen Stewardship -- there's a link on my sidebar. The lady there is an EXPERT.

I don't know if you've ever tried them, but I LOVE picked cauliflower and turnips.