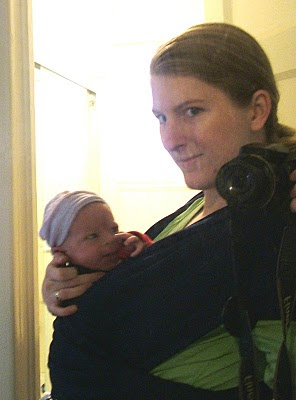 Today I was in the bathroom, filling up a basin to wash the baby in, when I got a glimpse of my face in the mirror. My hair was greasy from going unwashed for days, and messy from sleeping with it in a ponytail. I had dark circles under my eyes. In short, I looked a little worse for the wear.
"This is sad," I said to myself. "I look pathetic!" But I looked a moment longer, and it seemed I could see something else in my face: strength. Where did that come from? I am not a "strong" person.
Did I become stronger when I forgot about the pain of labor, got behind the contractions, and pushed this baby out?
Did I become stronger my first night alone in the hospital, lying awake with the baby on my chest because I was in too much pain to get out of bed to put him in his bassinet?
Did I become stronger on all those sleepless nights, crying as I got up because all I wanted was to ignore the fussing and pull the covers over my head?
Did I become stronger on my absolute worst day, when I was running a fever and surviving on six hours sleep in the past two days, and the baby was crying and crying because his nose was stuffy and he couldn't sleep unless I sat up and held him, and I was sobbing because it seemed there was no way that both he and I would get what we desperately needed?
Did I become stronger yesterday, when I held the baby almost the whole day long because his nose was still stuffy and his tummy was hurting him, and I had to stay stranded on the couch for hours while I got hungrier and hungrier and there was food only two arms-lengths away, just to avoid waking him when I'd finally gotten him to sleep?
Did I become stronger when nursing got so painful that I would cry out to him, "You're lucky I love you so much, or you'd be starving!"

Did I become stronger last night, when the baby wouldn't sleep in his crib, so I put him on his boppy pillow on the bed and curled up around him until he slept?

Or maybe it wasn't any of those hard things. Maybe I'm becoming stronger on baby's happy faces, air punches, and bright eyes. Maybe it was our first walk together, his first bath, our happy times with him lying across my lap staring up at me. Maybe he's giving me the strength I need by looking up at me so trustingly, with that look that says that he knows I'm his mother, even though I don't feel big enough, strong enough, or old enough to be his mother.
When I was pregnant with him, I wondered when I would feel like a mother. Right away, or would there be some moment later that would do it for me? But I'm feeling like a mother the way I started to feel like a wife: bit by bit, moment by moment, until I look back and realize I can't imagine ever being anything else.
Yes, dear readers, I think the mother magic is working. Slowly, without any of the "transformational experiences" I imagined, I'm becoming a mother. 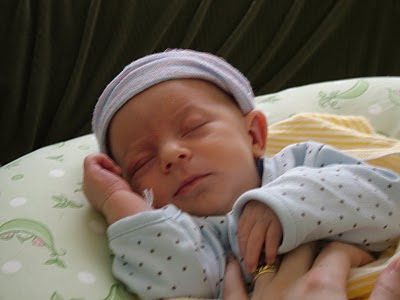 Great post, Sheila! I think you're wrong to say that you weren't a "strong person" before baby came along. But I'm so glad to hear that you can feel yourself growing into your new role.

Well, "strong" just isn't one of the 10 (or 20, or 30) top words I would have used to describe myself. Of course I do have a certain kind of strength, and always have -- just not the kind you're likely ever to bang your head against. People describe me as "sweet" and "nice" and "cute," but not "strong." And yet I'm finding that I *have* to be strong, and so I am.

What a contented boy, too! But I'd contend (to paraphrase a mug I grew up reading, about *fathers*) that you've been a mother for nine+ months already; what you're becomming is Mark's Mum.

Sheila, thanks for writing this. I appreciate the insight.

Someday when you have more time to write seriously, you're going to be glad you wrote these things, to look back.