Our move to Big Town is behind us. It was a painfully stressful week or so. Packing our things. Hiring movers. Getting six people, two cats, and two cars to the new place. Directing movers, in an empty house. Getting stickers for our cars so we would be allowed to park at our new house. Weathering many, many tears from the children. Waiting till they weren't looking so I could shed some tears of my own while still pretending that This Is So Great, Aren't We Having Fun? in the hopes that they would play along.
I'm not going to lie to you, though. This whole thing has not been much fun. And even now that the most stressful part is behind us, I'm not super jazzed about these changes. I guess I was hoping that all I dreaded was the transition, and once we were a little used to it here it would all be find. Instead I'm seeing more and more ways that this place is just not as good as what we had.
In a small town, we could afford a large house with a large yard. And much of what we did for fun was free. Here, we are in a townhouse with no yard to speak of, and everything I try to drag the kids to is stressful and expensive. Of course it doesn't help that it's the most miserable month to live in Virginia, where even in Small Town we would be hunkering down with crayons and playdough rather than attempting the kind of summer fun I remember from my childhood. (Not that even the Pacific Northwest is still cool enough in summer to go outside every day, anymore. There's a lot of heavy "you can never go home" feelings around right now.)
I don't know anybody here, yet. I don't even speak the same language as half the people here. I was hoping to introduce the kids to diversity. Instead they shriek, "I can't play with the neighbor kids because they TALK FUNNY and I HATE people who talk funny!" I know that this mostly has to do with missing home, but it also makes me worry. Fear of the unfamiliar is natural, but it's also where racism comes from and I am not sure how to combat it. Especially in my culturally-alienated but legitimately Hispanic children.
I thought moving here would make me closer to things and give me more options. But it's actually significantly further to the next grocery store than our old house was. Closer to Aldi, I'll admit, and that's my favorite, but even if we want to just run out for a couple things, it's still ten minutes. There are more restaurants, but they're all more expensive. There are more pools, but I still haven't found an outdoor one that's open on weekdays, and the indoor one near us gives me a headache and costs $25 for the massive bunch of us. There are parks but none of them are the sort of shady/ splashy/ uncrowded parks we had back home.
The roads around here are either grungy or massive and busy. Or both. I hate wires that crisscross over the road, and huge parking lots, and places without trees. There is a part of town that's more scenic, and we don't live in it because it's even more not-cheap than where we do live. Driving north is pretty nice, because we pass through a large regional park. Though there is no entrance to that park from our end, only from the county on the other side. I wonder who made that decision, and why.
The new house is newer than our old one, less broken. It has central air, and I'm certainly not complaining about that. I did dream of buying a house with fewer stairs, though, and this one does not fit my hopes. 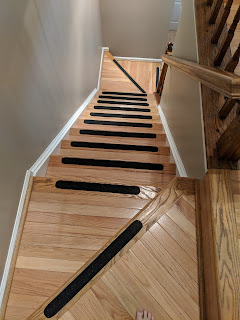 I put friction tape because I'm terrified of slipping, but I've still slipped on them twice.
The kitchen is pretty. Of course I'm the rube who doesn't like gas stoves. There weren't enough cabinets, which was the tragedy of my existence for a few days. I felt near tears even going in the kitchen because it was all scattered with dutch ovens and ice cream makers that I had no possible place for. But we got an IKEA cabinet to put along the side wall and now everything fits. It makes me feel marginally better about my life. 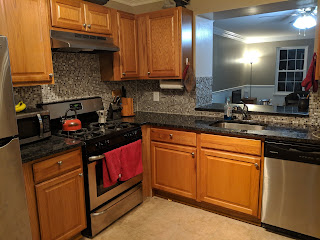 New cabinet not shown in this one. The hatch into the living/dining room is cool though.
The view off the back deck is quite acceptable. This green patch doesn't really belong to anyone but the HOA, so it's not like having a yard, but if I can just coax the children to have adventures in there with me it might be a little bit the same. 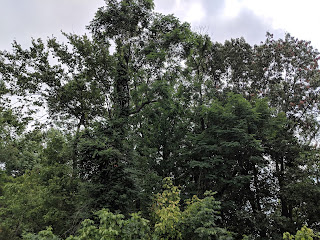 I don't care for the view out the front. It is a parking lot and there's no getting around that. But the kids can scooter there so they use it more than the back. We've managed to play with the neighbor kids some, the ones who are younger than my kids and don't speak English. It turns out you don't really need to talk much to scooter. Their dad seems to be the social center of the block and talks to everybody. I am so thankful for him. 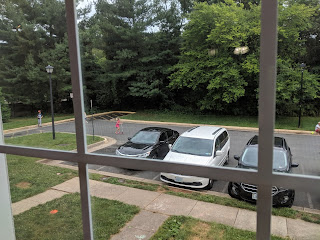 He's the one who tipped me off this creek spot. The whole time I've lived in Virginia, creek spots have been precious; if you know a spot, you spend your whole summer there if you can. This one is within walking distance of our house, on the other side of the HOA, and three out of four kids loved it. 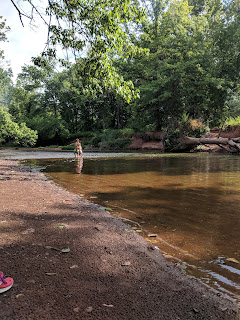 Problem: it was covered with trash. The whole woods behind are apparently a general party zone for everyone in the area, and there aren't any trash cans. It's the tragedy of the commons in action. If it belongs to everyone, it belongs to no one, and no one seems to be responsible for cleaning it up.
WELL, while we were there, and I was feeling morose about the garbage situation (which was much larger than I had the slightest hope of cleaning up), a guy showed up to tell us it actually did belong to someone, which is the HOA (if I understood him right). So there will now be RULES. And a cleanup day. And maybe paved paths.
I like the idea of cleaning it up. I didn't much like this guy's insinuation that the problem was Hispanic people from outside the neighborhood coming in and drinking there. First because most everyone here is Hispanic, in or out of the neighborhood, but that isn't super relevant when it comes to finding out who's littering. Second because who really cares if the people from the neighboring apartment complex hang out at the same creek; nature should belong to everyone and it's honestly more fun the more kids there are to play with. Third because I don't care if people drink so long as they throw their bottles away. Fourth because his solution was unsightly no-trespassing signs and fences that are hostile to walkers. It would be much easier to get there from our house if there weren't so many fences, but I understood from talking to him that making it impossible to walk around was a goal. That people who walk from one neighborhood to another are a problem, and it's better to make it impossible for people in this neighborhood to get around without burning gas than it is to let apartment-dwellers get to our creek.
I am just feeling really demoralized about our future here. Maybe I'll feel different when the kids start school, especially if they find more friends here than they did back in Small Town. (What if they don't??) Maybe I'll feel different when I finally find a way to meet people (if I ever get that brave). Maybe I'll feel different if I start taking classes at the local community college, a thing I mean to do if I am never not overwhelmed and stressed all the time.
But I keep thinking, what if I don't? I'm a hermit at heart; maybe what was best for me was to have a little space to be a hermit in. I can't believe I had two friends and a school in walking distance and a splash pad that was eight minutes away and free, and I gave that up seeking . . . what? Friends? Opportunities? Happiness? I had those things available to me at the old place, but I couldn't access them because I was scared and bad at leaving the house. Which I still am, just in a smaller house.
I hope things get better soon. They kind of have to.
Posted by Sheila at 4:57 PM

Wow, I have no wisdom to convey. I hope things get better with time. I've always felt bad after moving.

I really hope you guys eventually find your groove here. This town is not so bad overall.

I am seeing this a month later, after logging on to Feedly for the first time in...well, while.

Hope things are smoothing out! Every place has its ups and downs and readjusting is hard. Summer is its own kind of hard because everyone's schedule is wonky.

I'm guessing your kids will go from "these guys talk differently" to utilizing a weird form of Spanglish very soon. At least, that's how it goes with us.