Solstice soup and the carbon cycle

I've been celebrating solstices and equinoxes, in a quiet way, for three years now.  I know it must have been in a quiet way, because although I definitely have been posting about it on facebook, my own husband thinks "nobody celebrates Solstice."  Ha. 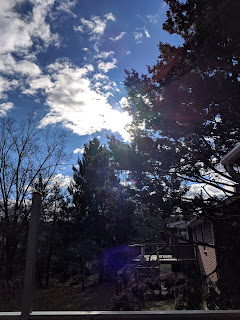 I like astronomical holidays because they are for everyone.  You don't have to believe any given thing; the sun still moves the way it moves.  And it brings a lot of thoughts and reflections: about darkness and light, about change, about the cycles of life.

Unfortunately I can't actually adopt their customs without a tribe of people to do them with me, though I still do like the idea of spending Solstice burning fires.  Our fireplace is still not usable since we need to get the chimney cleaned, so I just lit a bunch of candles.

This year my big thought was about the carbon cycle.  It's not something I really understood until recently, with the help of some science fiction books about terraforming and a lot of news articles about climate change.  What we hear in school is that plants turn carbon dioxide into oxygen.  But somehow I never thought where the carbon goes.  Of course the carbon, together with the water the plant absorbs, become the body of the plant, largely in the form of hydrocarbons--carbohydrates, cellulose, even fat.  That's how the plant stores its energy.  When you eat the plant (or any animal does) you release that energy again, but to use the energy you put the carbon back into the oxygen you breathe, which makes carbon dioxide.  (I'm totally leaving out the nitrogen cycle here, which is also super cool.)

But!  Not all of that hydrocarbon gets eaten by people.  Some of it decays, so that the carbon goes back into the atmosphere--that's why you can't reduce the carbon dioxide in the atmosphere just by planting things and cutting them down.  To reduce carbon dioxide, carbon has to be sequestered--either by large living plants keeping it in use for a long time, or by burying it deep in the ground where it can't be released, as in coal, oil, and natural gas.  The stores of carbon deep in the earth are the result of millennia of carbon sequestration, which gradually reduced the carbon in the atmosphere until it reached modern levels.

That stored carbon is a mixed blessing.  On the one hand, you can get all that energy--millennia of sunshine, all stored up in the carbon.  On the other hand, you can bring our atmosphere very suddenly to prehistoric levels of carbon dioxide.  We have to be very careful and respectful when it comes to that bottled sunshine.  I wonder what colonists on another planet might think, after generations of trying to sequester carbon to make their atmosphere breathable, of the heedless way Earthers just burn the stuff up.

But this isn't meant to be a downer on fire.  Fire is awesome and powerful.  It allows us to live through the winters and make our food nourishing enough to sustain our massive brains.  It's like a little sun, because it releases the sunlight from past years.  And it echoes the way our own bodies burn carbohydrates for energy--fire breathes out carbon dioxide just like we do.  Can you picture a tiny little fire in each of your mitochondria in each of your cells?

In the summer, the earth breathes in.  It stores the sunlight in millions of plants, filling its atmosphere with oxygen.  In the winter, it breathes out--as our fires and our bodies both use up the stored energy, and release carbon dioxide.  We need both the breathing in and the breathing out to stay alive.  It's a beautiful, complex dance to think about.

Anyway, on to the soup.  This is my mother's Christmas Eve soup, which she got from her mother.  Trouble is, no one in the family agrees with me that Christmas Eve is for soup, so I thought I'd make it for Solstice instead.  As an extra benefit, it can be vegan, which was nice given Solstice was on a Friday.

Chop the onion and saute on medium high heat until it is starting to brown.  Add the liquid, chopped carrots and celery, and barley.  Cook for 30 minutes and then add all the other ingredients.  Feel free to sub in or out whatever vegetables you like and have.  Taste as you add the seasonings and don't stop till it tastes right.

*I used Better Than Bouillon, but a bouillon cube would also work.  Beef flavor is good if you don't have vegetable.
**This is technically not vegan because it has anchovies.  A dash of soy sauce or aminos might be good.

I served it with biscuits and there was only a little bit of whining.  At first Miriam whined because she "hates soup" (she does??) and then I told her it had green beans in it and she loved it, but then Marko whined because he does not like green beans.  Oh well.  It got et.

Fish stew was a popular Christmas Eve meal in 19th century Ireland, so you have that behind your soup idea.