Nobody likes vegans and prolifers 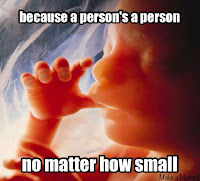 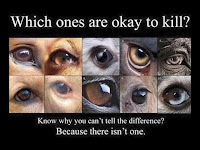 You know that joke?  "How can you tell if someone's a vegan?  Don't worry, they'll tell you."

It's kind of true.  I briefly followed a vegan online and the vegan posts were unending.  You know the kind of stuff: rude assumptions about meat eaters, references to people "forcing their children to eat rotting corpses," pictures of slaughterhouses, adorable pictures of pigs, Holocaust references.  I got tired of it and unfollowed.  It just felt extreme.

It occurred to me that this is the same kind of thing I'm used to seeing from the prolife movement: constant posts, graphic pictures, attributing evil to prochoicers, and Holocaust comparisons.  Nobody likes it; it makes them uncomfortable, but the prolifers, like vegans, just can't stop.

And it makes sense, really.  Prolifers and vegans both believe that they are witnessing a moral disaster, worse than a nuclear bomb or a genocide.  It's pretty hard to stay moderate and appealing when you legitimately think thousands or millions of morally significant beings are being murdered every day.  But the backlash comes from the same place: nobody likes to feel they are being accused of supporting a moral catastrophe.  That's why people sneer at vegans, mock their food choices, or start arguments about the health of their diet.  It's why a prolifer I know got egged outside a clinic.  It's downright offensive to accuse people of being okay with something deeply morally wrong.

The trouble is, the rights of animals and embryos are on the fringes of morality.  I've said before that basic morality is provable through reason, but the actual foundation you choose to underlay it all is a bit arbitrary -- you have to choose who to include in your circle of morally significant beings, and you have to choose whether to value life, liberty, or happiness most.  The result is that we'll all agree on the morality of some things, like slavery or murder, but in fringe cases like animal rights or abortion, we will diverge -- all while considering ourselves to be reasonably moral people.

Unfortunately arguments about these things tend to miss the point.  We assume people share our moral foundations, so we attribute evil motives to them ("they hate babies"/"they don't care about suffering") while failing to address the real differences in morality.

The difference here is mainly the circle of morally significant beings.  A prolifer puts the boundary at "members of the human species."  If it's a human, and it's alive, it's equivalent to any other living human.  An eight-cell zygote is exactly as significant as you are.  A vegan, on the other hand, tends to place it at "beings that can experience happiness or suffering."  So they will find it absurd to value the zygote more than a chicken, because the zygote has no awareness we know of, nor any brain to be aware with, while the chicken clearly suffers when locked in a battery cage.  Sometimes they accuse the prolifer of lying about their motives, and simply wanting to oppress women.  (And some prolifers really do seem to want that; but most, I think, are completely honest.)

Given that the decision which to value is mainly arbitrary, or else handed down from a religion, it's unlikely to be fruitful to argue about these principles.  Instead, I think both groups might benefit from selling a milder form: Okay, say an embryo isn't exactly as valuable as a toddler.  Or a chicken isn't exactly as valuable as you are.  That doesn't mean these beings have no moral value.  If you could preserve these lives without sacrificing the life, liberty, or happiness of adult humans, wouldn't you want to do that?  I don't think a chicken is equal to a human, but all things being equal, of course I'd prefer it if chickens weren't debeaked and locked in battery cages.

To get here, people have to discard the "you're a moral monster" part of the argument.  Instead they should try to stay positive about small changes people could make that wouldn't throw any other moral value (the liberty of women; feeding the hungry) under the bus.  For instance, donating to a pregnancy center that supports women who want to keep their pregnancies but can't afford to.  Or supporting laws that make insurers cover the cost of pregnancy and birth.  Or eating a vegan meal one night a week.  Or buying cruelty-free meat.

Would a prolifer or vegan really be satisfied if people made these choices and didn't go the whole way?  Of course not.  The prolifer won't be happy till embryos have the same exact rights an adult human has; and the vegan won't be happy until everyone gives up meat.  But these are goals they won't actually be able to achieve, not in our lifetimes at least.  So I'm just suggesting that in their outward messaging, they focus on these goals.  Think about it: what are the odds of converting one person to a vegan?  Pretty low.  But you might have better luck converting seven people to once-a-week vegans, and that saves the exact same number of cows.  Likewise, we're not making abortion illegal right now (and if we could, people would still get them) but there are lots of interventions which lower the abortion rate.

I don't know how many vegans or prolifers read this blog, but if you are one, I highly recommend dropping the language about how horrified you are and how terrible people not on your team are.  They aren't terrible, they're working their morality from completely different assumptions.  Now they're doing a great deal of harm, by your standards, but they need to be convinced, not condemned.  And the gentle, positive, incremental way is going to work a lot better for your goals.
Posted by Sheila at 10:50 AM

Email ThisBlogThis!Share to TwitterShare to FacebookShare to Pinterest
Labels: Ethics

A decent argument. Unfortunately, its missing a crucial aspect of this: People didn't arrive at these positions by accident.

Its not like people who belong to PETA are unaware of the mockery that accompanies their organization. Those who are would be swiftly disabused. So either they leave quickly, or they quickly become okay with derision and mockery. And I'd argue that more than just being okay with it, the hardcore PETA/anti-abortion people would revel in it, taking it as proof of their righteousness.

Probably the most readily available extreme example of this would be Fred Phelps, who near as I can tell spent his entire adult life finding the public position which would guarantee the most hate would be flung his way. In the 1960s, that meant he was a civil rights lawyer. In the 2000s, that meant picketing the funerals of soldiers.

You say such people should switch their tactics because they lack success, but that's only true if you think changing people's minds is how success is defined. I'm inclined to believe that squirt of dopamine they get when confronted by the deviant, evil hordes is success, and extremeness is quite capable of providing it.

That's a very good point. Perhaps I expect people to be motivated more by ethical philosophy than they are. Whereas in reality, we're motivated by a great many things, only some of which are rational.

For instance, I was reading a book about veganism yesterday, and it covered the question of whether to throw away your leather shoes after going vegan. The authors' very reasonable opinion was that the cow whose skin that was is already dead and tossing the shoes doesn't bring it back, so you may as well wear them till they wear out. However, they mentioned a lot of people do want to get rid of them for fear of being judged either by fellow vegans or by other people who think they're being hypocritical. So perfect purity can get put in a more important place than actual saving of animals, sometimes.

That said, a friend of mine reminded me after reading my post that *plenty* of vegans aren't like I described, and I am well aware that lots of prolifers aren't like that either. The trouble is, they are much less visible. If your vegan activism consists in bringing a delicious vegan dish to a potluck and sharing the recipe, or suggesting friends have a bean meal once a week, people might not even catch on that you are vegan. Likewise if your prolife activism is helping out actual pregnant women, you might get judged by fellow prolifers for not keeping morally pure by voting only for prolife politicians, but you'd stand a better chance of preventing some abortions. And I shouldn't generalize as much as I did.

Ughh, purity police. I loathe them, no matter who they are. Throwing away perfectly good shoes is but one example of the sort of stupidity the hunt for purity can inflict.

Your friend was also quite right. Its why I referred to people from PETA rather than vegans in my post. I felt it was a less broad brush way of referencing the sort of people you wished to discuss.

As pro-lifers/anti-abortion people, I must admit I have less hope than you do. Our current president has kinda been a Rubicon for me in that regard. His position on this issue is so manifestly new and bad faith; I find it impossible to credit anyone who supports him based on abortion to be either persuadable or potentially interested in actually having a positive impact on the issue.

Pro-choice reader here. I worked at a Title X clinic for a decade and dealt with many, many picketers. When anti-choicers shouted bible verses, hellfire and brimstone at me, I walked away. When they spoke calmly about adoption and foster care, I listened. When they waved pictures of bloody fetuses in my face or called women vile names, I ignored them. When they spoke calmly about affordable child care and housing for poor women, I paid attention.