I apparently have to address homosexuality again.  Because when I shared my myths post, everyone kind of ignored what I said and just repeated "but lavender mafia tho."  It's really entrenched and I've been arguing against it over and over, but no one's really convinced and I'm wasting my time.  Instead I'll just throw it all in a post, and if I feel the compulsion to talk to these people again, I'll just linkdrop it as needed.

People like LifeSite News, Church Militant, Crisis, and former nuncio Vigano (more on him later) are pushing a single narrative in regard to sex abuse, the "lavender mafia" story.  Basically they separate priests into two categories, like this: 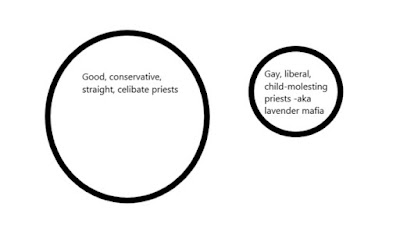 While they'll admit that there are few rare exceptions (apparently 20% of victims being female is just a tiny blip in the data) they mostly think that if you purged the gays -- who can be easily recognized because they are liberal and push gay rights -- there would be hardly any abuse anymore.

I argue that the Venn diagram looks more like this monstrosity: 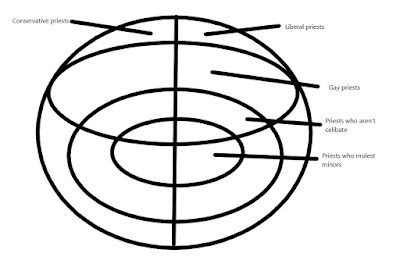 I've had some trouble because there is no statistical proof of what percentage of priests are gay, which makes it impossible to say if the gay ones are more or less likely to be celibate, or to be molesters, than straight priests.  One thing that is clear is that the rate of homosexuality is drastically higher than the surrounding population.  Estimates range from 1/3 to 1/2 of all priests having a homosexual orientation, though most would be private about it.

The usual "proof" given is that 80% of the victims in the John Jay Report were male.  The authors of the report denied that this meant the abusers were gay, but said it was about opportunity.  Still, they left themselves open to such a claim by calling the 11-14 age group -- the age about half the victims were -- "postpubescent."  Only, most boys in that group would not be postpubescent.  The clinical definition of pedophilia is attraction to children under thirteen.  Psychologists believe that pedophiles do not care about the sex of their victims; it's children in general that they're attracted to.  So I think we can discard this "proof."

The next claim is that priests who are gay (and by extension, assumed to be non-celibate and possibly molesting children) are necessarily liberal.  It makes sense that a gay priest might choose a liberal approach, because it would allow him to be sexually active without guilt.  And certainly there are some who have taken this approach, and if they get into any trouble for their behavior, whether with adults or children, they might claim "I'm being persecuted for being gay!  It's those terrible homophobes in the church!"  That way he can bring liberal lay people and liberal clergy to his defense.

But there are plenty of priests who take the opposite approach: they preach a very conservative, strict ethic on sexuality and even decry homosexuality.  Sometimes they even obsess over it, making it their main mission.  But this is a smokescreen to conceal their behavior.  What better cover for being gay than being a massive homophobe?  That, or they are so deeply ashamed over their behavior that they can't stop preaching against it, even though they also can't stop doing it.

Want examples?  There are lots.

Fr. Maciel, of course.  I don't remember him ever ranting about being gay, but his order was very conservative and gender-essentialist.  The sexes were strictly segregated for chastity's sake -- to the point that those of us who had brothers at the apostolic school weren't allowed to talk to them except under special circumstances.  But we also were not allowed to be undressed in front of other girls; to form particular friendships; or to share beds when we stayed in hotels together, even though we were put 3-4 in a room.  The careful tiptoeing around any sexual circumstance led to a lot of people defending Maciel -- "When could he have ever acted out sexually?  The rules there are insane, it would have been impossible!"  Well, the rules were different for him.  Anyway, he had two mistresses and abused dozens of boys.  To me, that looks like a person who is normally straight, but also a pedophile.

Fr. C. Frank Phillips, of the Society of St. John Cantius founded a traditionalist order of priests who say the Latin Mass.  He was placed on leave after credible allegations of sexual misconduct with adult males.

Fr. Tony Anatrella is the originator of much of the narrative of homosexuality being merely a defect -- you're not gay, he would tell people, but simply straight and confused.  He also helped write Benedict XVI's policy against ordaining homosexuals.  Later it turned out he was sexually harassing people during his "conversion therapy."

Cardinal Keith O'Brien campaigned heavily against gay marriage, calling it "grotesque."  Later it turned out he had been sexually involved with at least four priests or seminarians -- one of them for years.

This seminarian claims there was an active homosexual culture at his conservative seminary.

This article claims several conservative bishops are gay.  From the article:

"[This bishop] spent a million dollars in a campaign to persuade registered Catholics to support a marriage amendment that would define marriage as only between one man and one woman. (It was defeated on November 6, 2012.) In connection with this effort he wrote every priest of the diocese and said the he would "not tolerate any open dissent" to his efforts.
He wrote an article about his official teaching on homosexuality to a local paper. When a woman objected to his interpretation he wrote her a letter: "Catholics are bound in conscience to believe this teaching (that homosexuality is intrinsically evil). Those who do not cannot consider themselves to be Catholic and ought not to participate in the sacramental life of the Church... Your eternal salvation may well depend upon a conversion of heart on this topic." (Star-Tribune 5-11-10)
Our clerical informant insisted that [this bishop] has a gay orientation that was known and talked about since his seminary days. (I never report the identification of a cleric's sexual orientation without at least three reliable independent personal validations. Those I have.)"  [My note: I redacted the bishop's name because I still feel a bit funny about outing the guy.]

Three priests say gay men should not be priests -- I'm including this because I find it ironic that the first of the three did not know that his superior was sexually active with males, and the third was later accused by several women of sexually molesting them during "exorcisms." The former should tip us off that purging gays from the priesthood is a lot easier said than done; the latter should remind us that women are also victims of molesters.

Anyway.  Given all this, I'm pretty annoyed at Vigano's statement.  Not that I disbelieve his main point, that Francis knew about McCarrick and brushed it off.  I mean, we already know that Francis knew about Barros and brushed it off.  He's got a history.  And we also know that JP2 brushed off any number of things and still got canonized.  One can always claim one was naive and believed the guy was innocent.

Basically, here's what I think is going on.  Let's keep the mafia metaphor.  Everyone's got skeletons; everyone's got dirt -- or nearly everyone.  The bishops who don't have mistresses or lovers have covered at least once for those who do.  Vigano himself covered up an investigation against Niedstedt.  For a long time, it was an uneasy truce between liberals and conservatives -- let's sweep the scandals under the rug, even though we all know each other's dirt, because if a scandal came out, the church's reputation will suffer and we'll all be worse off.  (Just like in the Harry Dresden books I'm currently reading -- the wizards and the vampires hate each other, but there's a mutual understanding that you never call the cops.)

Well, the scandals are out and the church is suffering just as predicted, so Vigano thought, "Well, why the heck not?  Let's start slinging mud."  He's bringing out what he knows, because he hates Francis and the liberals.  We'll have to see if some liberal bishops have anything to sling back.  But I think we can predict a lot of ugliness in the future.  And really it's for the best -- even if they're exposing scandals for their own reasons, they'll be exposing them and that can only be a good thing.  Fewer coverups are always a plus.  Maybe people will stop doing it because they don't want to give their ideological opponents ammunition -- when, sadly, the virtues of chastity and charity were not reason enough.

Victims' advocates are coming out saying they don't care to be used as ammunition in a fight between liberal and conservative bishops.  And really, it's a pretty gross thing to do.  I'm also concerned about innocent people caught up in this -- for instance, Fr. James Martin, who has preached against discrimination against gays (though he has never, by the way, advocated for a change in church teaching).  People are saying he must be gay, must be part of the lavender mafia, must want more child sex abuse.  That's a really sick thing to say about a priest who, so far as anybody knows, is celibate.  And there are lots of quietly gay priests, both liberal and conservative, who are doing a fine job as priests, chaste and harming no one.  I would hate to see a witch hunt attempt to drive them out.
Posted by Sheila at 11:37 AM

Email ThisBlogThis!Share to TwitterShare to FacebookShare to Pinterest
Labels: Catholicism

That Venn diagram is so beautiful. *stares in stunned awe like a firefly with a porch light*

Being as Vigano was very high up in the church I take his claims about a lavender mafia much more serious than your average catholic conservatives blogger. That is why I can’t discount his claim. Just because a bunch of nobody bloggers claimed it first doesn’t necessarily prove it untrue for me.

All that being said..Seriously thank you for this post.