Glasses and the ship of Theseus

Since Jackie was born, I haven't been seeing very well.  I gave it some time to get better on its own, but it didn't, so I finally went out and got some glasses. 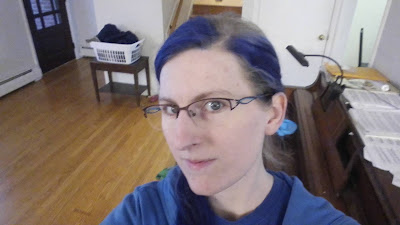 It really should not be a big deal.  They're just glasses.  I even think they look fine, in the abstract.  But my face doesn't look like I'm used to it looking.  It's thrown me into a tailspin of anxiety, which I tried to remedy by putting more blue on my hair and painting my toenails, but of course this made it worse.  I look in the mirror and I don't see me.  I see someone who looks very, very different.

Change is one of the more troubling parts off the human experience.  When I was a kid, I loved it and was always in a hurry for more things to change.  I tried on new outfits, rearranged my room, measured myself against the wall to see if I'd grown another inch.  Then puberty hit and I'm not sure I've ever recovered from the trauma.  In my head, I'm still about ten years old.

External things change all the time.  The house I grew up in is still there, but it's been changed a lot and I can't go there anymore.  My family has four more kids than it had when I was growing up in it, with a whole new set of customs and inside jokes.  The cabin where we spent our honeymoon has been sold.

But that's nothing compared to the amount we ourselves change.  When I go back to a place from long ago, it doesn't matter how little it's changed -- it still looks different from the way it looked when I was there.  My old college campus is ten minutes from me, but I rarely go.  It's just too weird, being there yet feeling so different than I did then.

I sometimes wonder what twelve-year-old me would think if she heard I never built the treehouse that was my number-one dream at the time to build.  Or that I have four kids and only one cat.  What would sixteen-year-old me think if she knew I never got consecrated, that I now detest Regnum Christi?  What would twenty-year-old me think about my not being Catholic anymore?  What would twenty-five-year-old me think about my kids going to public school and getting all their vaccines?  Would all those people be disappointed in me?  And what is the point of making any plans, having any opinions, dreaming any dreams, knowing that my future self might think all that stuff is stupid?

With so much change, it's hard to see what exactly stays the same about me.  I was a bubbly, talkative person at thirteen, and now I dread leaving the house.  I don't look the same, have the same opinions, or see any of the same people.  But when exactly did the change happen?  Old me wasn't abducted by aliens and replaced by new me.  Instead the change was so gradual I didn't even notice most of it.  It's like the Ship of Theseus.  This philosophical parable tells about a ship which undergoes repairs until, over time, there's no part of it that hasn't been replaced.  Is it still the same ship?

I've gotten myself so hung up over this idea that I've been afraid to go to sleep because I'm not sure the version of me that exists tomorrow is really the same as the one I am today.  Does that mean falling asleep is dying?  Sometimes it feels like it is.

Religion helped me with this, when I believed in it.  There was this unchanging soul inside of me that kept everything consistent even after every molecule of my body was replaced.  And I imagined eternity would involve looking back over every moment of my life, being able to savor every sunset and fiery autumn leaf and baby's smile.  I would have all the time in the world to enjoy all those transitory things, because nothing would really be lost.  Sadly, I don't believe that anymore.

I guess it's one of the heartaches that flesh is heir to.  Like losing friends or accepting that we will one day die, it's just a grief we all have to live with.  You don't have to keep obsessing over it, but you can't necessarily escape it either.  It just is.

I recently read a great story about this in which the hero decides not to change.  It's kind of appealing.  At the same time, isn't it rejecting a big part of what makes us human?  We need the ability to change, because nobody gets everything right on the first try.  All of the ideas I once believed and have since discarded, I discarded because I had good reason to think they were wrong.  And I need the ability to do this.

Likewise, when my kids grow older, sad as it is to say goodbye to their baby selves, it's a joy to discover their older selves.  It's something that is supposed to happen.  As they say, "Growing old sucks, but it beats the alternative!"  I wouldn't even want my kids to stay babies forever.  It would be depriving them of a chance to be something new, something they have the potential to become.  Maybe I don't know what that's going to be, any more than they do, but there's no reason to assume that what they are today is better.  Or that what I am today is better than what I will someday be.

I guess the scary part is that, at thirty-one, I worry that I've already peaked, that the rest of my life is going to be glasses and bifocals and hearing aids and sore joints.  My body isn't likely to get any healthier.  Though there's still hope for increased wisdom and more accomplishments.  It's just ... life is so short, and I spent such a lot of it in cults and having babies.  It stresses me out.

I don't really have a tidy takeaway.  I do think that change is a part of what I am -- that imagining a constant self that doesn't change would be like imagining a river without the flowing.  At the same time, it hurts and it's scary.  That's a part of it too.  Like changing seasons, would I really appreciate anything in my life if I knew I would have it the same forever?

Maybe not.  But that's not going to stop me from clinging to things I want to keep.
Posted by Sheila at 11:07 AM

What is the point of making any plans, having any opinions, dreaming any dreams, knowing that my future self might think all that stuff is stupid?

Remember when you were writing about Marko's struggles with school? John's take was that school in the present, however traumatic to present Marko, would make future Marko a lot happier. Your take, if I remember correctly, was that present Marko deserves to be happy, too.

I still miss past Sheila, but I think that present Sheila deserves to be happy. Make your plans, have your opinions, dream your dreams.

Also, I'll never forget a conversation I heard between a widow in her late sixties and a younger woman with a more optimistic outlook. The widow had been getting to know a great man her age, who wished to start a romantic relationship with her. And though the widow really wanted that, too, she also felt she was too old for it. The younger woman said, "One day, when you're in your late eighties, you're going to look back at this time and think, 'I was so young! I should have gone for it!'" Sheila, you may have spent most of your life being in a cult and having babies, but one day you'll make it to an age that will make turn those decades into a smaller part of your life. Or at least future Sheila will make it and probably wish she could tell you about it. :) Whatever it is that gives you joy now, I hope that you go for it.

That is very sweet.

I just read one of the most fascinating ideas ... I don't know yet if I agree with it or like it, but it is... fascinating.

It's from Karl Popper. Let that inform your judgment as seems fit...

The idea is that a human self (or, individual rational animal) Is Exactly What Can Change Its Mind --- what can examine ideas (practical ideas, let us say) and let go the useless ones. Popper constructs this idea within Darwin's Evolution, pointing out that an animal that can imagine and change its mind is like an animal that lets counterproductive ideas die instead of the animal that thinks them. To run Popper's idea backwards: if you couldn't change your mind, you wouldn't even have a sense of self to worry about.

Let's turn then to the Ship of Theseus: constant through the whole tale is Theseus himself, with a ship in poorer or better repair. It is always the ship of Theseus because there Theseus is. And if Theseus couldn't replace the breaking bits of his ship over time, he wouldn't have a ship for very long; and then he'd would have to walk home or drown, and there'd be no more tale of Theseus. But from the perspective of the ship, it is only because it keeps breaking and needing repairs that Theseus actually needs to be there!

(I'd rather say that: a "you", "a self", is a locus of responsibility, and are neither your habits any more than your habit... or habitation... and in particular, What Your Habits Are is a great part of what you are responsible for. But. Another time.)

"Then puberty hit and I'm not sure I've ever recovered from the trauma. In my head, I'm still about ten years old ... I was a bubbly, talkative person at thirteen, and now I dread leaving the house."

To the extent that the bubbly, talkative thirteen-year-old Sheila cared about people and had things to contribute ... you still have and are that! I have benefited from what you've written over the years.

"Like losing friends ..." And this. Oh, oh. There is nothing I can think of to make it seem as though the loss of a friend is a good. We can say, well, that friend lacked virtue, or maybe I did ... Still, oh, oh.

Anyway, the ship has identity because it's in a relation? Cool!