I've been busy lately.  And I mean really busy, not scrolling-through-facebook busy.  School has all kinds of random demands lately--bring cookies for this party!  Bring grapes for that party!  Send in three dollars, must be cash, for the field trip!  There's homework, of course, a daily nightmare.  There's editing my book, which I've started now that I let it sit for a few weeks, and a few people have read it.  (They had some hard-hitting criticism, which stung at first, but I sat on it and I think they're right.  And now at least I have a direction to go in for the rewriting.)  And Christmas presents too!

For Marko and John, I made weighted blankets.  They're very popular for kids with autism, SPD, and anxiety, because supposedly the sensory input is calming.  I figured Marko's would help him be a bit less restless at night, and as for John, he's always loved big heavy blankets, but they make him very sweaty in summertime.  So he is getting one as well.  My hope is that it will feel like a big comforter without being hot.

I read some online tutorials and figured out the basics: you sew around three edges and sew some vertical channels.  Then you pour in the weights and sew across a horizontal row, pour in some more and sew those in . . . until you have little square pockets all over that hold the weights.  That's the way to make sure they stay put instead of all gathering in the corner.

You can use any number of things for the weights.  There are PVC pellets, like in beanie babies and bean bag chairs.  You can use beans or rice if you don't care that it's washable.  You can use BB pellets apparently.  I picked sand.  This was a mistake.  Sand is very dusty and I worry it will wash right out if I attempt to put the blankets in the washer.  Imagine fifteen pounds of sand in my washer.  I'm not even going to try it.  And there is a thin film of dust everywhere I worked on it, little bits of sand on the floor, sand trying to get into the crevices of my sewing machine.  I cannot recommend it at all.  Next time I'm going to see if I can find washed pea gravel or aquarium gravel, because much as I like the idea of something softer that won't feel lumpy . . . I also want something that won't get everywhere while I'm working on it.

My first step to make this was to get my old sewing machine fixed.  My Grandma J -- the grandma who taught me to sew -- got it for me for my 18th birthday.  It's been shipped across the country more than once, kept under a bed, shoved in an attic, left in a garage . . . it's had a hard life.  When Marko was a toddler, I tried to use it and found a little rubber part inside had melted from the heat in the attic where I was storing it.  I took it completely apart, ordered the new part online for a few dollars, and put it back together . . . but alas, it still didn't work.

So a few weeks ago (read: after it had been shoved in a box, broken, for six years) I finally took it to a repair shop.  The guy said it would cost me a fortune to fix, and all because I'd unscrewed something I hadn't been supposed to unscrew.  So much for my repair skills.  In addition, the bobbin case was rusted and would need to be replaced.  The repair man (who was really nice, I'll heartily recommend him to any local people who are interested) told me he couldn't possibly take my money to fix it, because it was a cheap machine in the first place and it would cost me less to replace than to fix.

That upset me because I don't have money right now for either.  So I moaned about it on Facebook and my other grandma (Grandma C) emailed to tell me to pick a new machine, whatever I wanted, and she'd get it for me.  Wow!  I was tempted to say no, but my Grandma J passed away some years ago, and all I could think was, let me let my grandma love me.  I wish I had more memories from Grandma J, let's not make the same mistake with Grandma C.  And there's just something special on sewing a machine that comes from someone in the family who also loves to sew.  So I picked out this baby: I thought I was being greedy, because it's a high-quality machine with heavy-duty metal parts inside.  The sewing machine repairman recommended Singer as a brand that's easy to repair.  It can do all kinds of things, like a zigzagging and decorative stitches and automatic buttonholes.  But my grandma thought I was holding myself back.  Nope!  I know there are more expensive machines out there, but they're complicated computerized gadgets.  I want something simple and strong.  This fit the bill.  Reviews say it can sew through layers of denim!

The actual materials cost under $30.  The My Little Pony fabric was a little pricey, but I knew Marko would love it.  The other side of his blanket is green, like Link from The Legend of Zelda.  He wears green daily, so he can be Link, so naturally the blanket had to be green too. 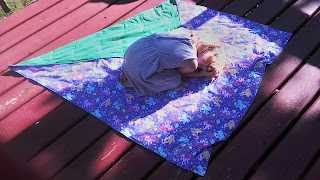 John's is dark green on one side, and a green pattern on the other.  It's kind of huge -- about 3'x6'.  That size weighted blanket is over a hundred dollars online.  Whereas with the help of my sewing machine, I was able to make it over about a week's worth of naps, for a fraction of the cost.  Am I proud of myself?  Yes.  Yes I am. 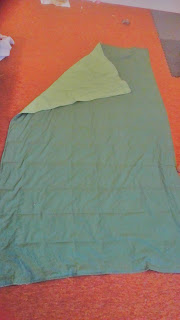 The real question is, are they really soothing?  I tried John's out today to see.  It certainly did smoosh around me in an interesting way instead of tenting the way lighter blankets do. 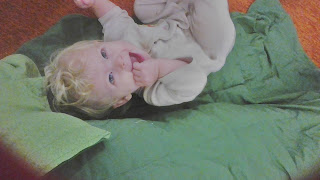 But I didn't really love the feeling.  It wasn't constricting as I might have feared--it doesn't feel heavy, with the weight distributed over the whole blanket.  But it didn't seem to do anything for me either.  Maybe if I'd felt anxious or overstimulated I might have felt differently.

We'll see how John feels about his!  I gave Marko his already -- he was having a really hard week, and I didn't feel like waiting on something that might be comforting.  He didn't say anything about it helping, but he did really like it, and I think he might be sleeping better.

Now, of course, everybody else wants one.  But no one really cares about the "weighted" part, so I'm going to make a plain cotton blanket for each of the others.  Miriam wants pink on one side, rainbow on the other.  Michael will have to come to the store with me and pick one.

But that, alas, will not be by Christmas.  There's only four days left and Jackie is too much of a toddler for me to take out needles and scissors any time she's awake.  But I'll get them done eventually!
Posted by Sheila at 2:31 PM

Excellent Article. Thanks for sharing...