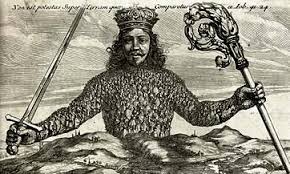 Years ago I wrote a post about libertarian parenting.  I still believe in giving kids freedom to do what they want within reason, but experience showed that there's only so libertarian you can be as a parent.  I don't just mean "kids are a bit dumb and would forget to eat or sleep if we weren't there to make them," which is true as far as it goes.  A little gentle direction usually is about enough, so actual forceful interventions don't have to be an everyday occurrence.

However, I never could figure out how to deal with violence in a "libertarian" way.  Nobody should have the liberty to hurt anybody else.  I asked in my libertarian parenting group what you do when kids fight, and they mostly just said, "Fighting is against the non-aggression principle so I don't allow it."  Well, yeah, but what do you do to stop it?  Do you (as some libertarians argue) have the right to take any action you want so long as you weren't the one to initiate aggression?  On the other hand, since you weren't the one attacked, perhaps you have no right to intervene and your bullied toddler has to duke it out on their own.

I did try, for awhile, the "just let them work it out" approach.  I thought that perhaps they fought so fiercely because they were relying on me to swoop in and sort things out, and thus if I kept out of it they would eventually realize they should watch their behavior.  But it didn't help at all.  Things got worse and it seemed every day the kids woke up with a chip on their shoulder against the other one.  It was a textbook example of a cycle of violence, enacted daily by preschoolers.  Not good.

From watching my kids, I learned the flaws of radical libertarianism, or anarchy. (Anarchists often call themselves "libertarian," but real libertarians usually agree that the government has a role of defense and crime prevention, so I'm going to leave the libertarians alone from here on and speak specifically to anarchists, who made up 90% of my "libertarian parenting" group.)  Flaws like these:

1.  Not everyone follows the non-aggression principle.  This is obvious, right?  The reason no anarchist utopia has ever worked out is that people keep conquering anybody that tries.  Of course anarchy tries to deal with this by claiming that when bad guys attack, anarchists will voluntarily band together to defend themselves.  But ...

2.  Not everyone is equally strong.  So a sufficiently powerful enemy can wipe you out.  This is easily observed when my kids get in a fight.  Do I really want things to settle into a "peace" where the bigger or more aggressive kid beats up everyone else?  Because kids are kind of famous for getting into these social hierarchies when they're left alone.  (In some cases, they don't, and I'm not entirely sure why, but suffice it to say that whatever I was doing was insufficient.)

3.  Not everyone agrees on what aggression is.  Is humming while someone else is trying to play the piano aggression?  What about breathing on someone?  What about eating their food when you thought they were finished with it, but it turns out they're not?  What if you accidentally brush against them and they think you bumped them on purpose and clobber you, does that make them the aggressor and are you allowed to hit them back?  These questions come up ... kind of a lot around here.

4.  People (children especially) are not always rational, and sometimes they get carried away.  So rather than simply defending themselves, they try to avenge themselves.  Or they see a sibling coming and panic and hit first.  Adults do the same, cf. Afghanistan.

Anarchy provides principles which would work if everyone followed them, mostly, but it has no way to get people to follow them, to account for human nature, or to de-escalate violence once it's begun.  So it's not really very useful for this.  (Anarchist communes that take place under the auspices of some other government sound lovely, but of course they rely on the government defending their title to the land, arresting trespassers and other offenders, and generally providing a safe place to be an anarchist.)

Hobbes has the answer to all this, and I never knew it because my poli-sci class was mostly spittle-flecked rants that you could safely tune out because the professor wanted you to just find an old test and memorize the answers.  *still bitter*  And we spent, like, one day on Hobbes.

Competition, or gain: Michael sees a toy Marko has and wants it.  He's hoping he can get away with taking it, so he snatches it.

Defense: Marko sees Michael going for his toy, so he shoves him away from it.  Quizzed about it after, he'll say, "I wasn't TRYING to hurt him, I was just trying to make him stop taking my toy!"

Reputation: After having been shoved by Marko, Michael leaps to his feet.  He knows that if Marko hits him and gets away with it, he's going to do it more, so he punches Marko in revenge.  His revenge is disproportionate to the amount he was hurt, partly because he's angry and not in good control of himself, and partly because he rationally wants to let Marko know he's not to be messed with.

Once the fight has started, it's bound to continue to escalate.  Each becomes suspicious of the other and sees the worst in all the other's behavior.  If they tried nonviolence, it would surely help, but they're all afraid to because they might be taken advantage of.

There is one thing that can help: the Leviathan.  I mean me.  In a family, the parent takes the role of government.  I can prevent all three causes of violence.

Gain: Every time one child steals from another, I can make them give the toy back.  That way snatching ceases to be a useful behavior, and children do it less.

Defense: They know that if they are attacked, I will help them.  If I were faster it would help even more, but even at my delayed response rate, they are assured that yelling "Mama" will get me to come peel the attacker off them.  So about half the time at least, they choose that approach over the attack-back (or pre-emptive attack) method.

Reputation: If they revenge their own wrongs, they always overdo it.  But if I assure them that I will give some kind of consequence to the attacker, they are more willing to accept it.  I still think that the desire for vengeance is one of the dark sides of human nature, but it's there.  If I don't punish the offender, they will.  The goal is to reassure the child that you've done what it will take to convince their attacker not to do it again.  When I'm not going to punish the child -- like when Miriam was the attacker and I know she's just being tired and cranky so a timeout isn't really going to be helpful -- I still take her out of the room so the boys think she is getting punished.  And when the attacker is someone completely irrational -- like Jackie, or the dog -- I still give them a little lecture: "Gilbert, you must be more careful!  No stepping on people's feet!"  Somehow the kids consider this satisfactory.  But they do demand that something is done, and I'm beginning to see the sense in it -- they fear that if their attacker is allowed to get off scot-free, they'll do it again.

The Better Angels of Our Nature explained this stuff a lot, pointing out that honor culture flourishes in places where there is little or no government, whereas a strong government gets wronged people to press charges, file a lawsuit, or mutter "there oughta be a law."  When there is no higher authority for people to appeal to -- like in a corrupt state, or when kids are left unattended -- people feel they must create fairness for themselves through vengeance and preemptive attacks.

It's important that the Leviathan is separate from the parties it's arbiting among, and that it is stronger than any of them.  Obviously an arbitor that is obviously partial, or which can't enforce its judgments, is no different from none at all.  That's pretty easy in my case, though -- I am definitely a lot bigger than my kids, and I'm not a part of any of their fights.

The embarrassing part is that it took me so many years after first "studying" Hobbes to figure this out.  I had thought Hobbes was the bad guy.  Turns out all he was saying was, "Without some way to arbitrate disputes, life is going to be nasty, brutish, and short."  Or,  ya know, full of squabbles over toys wherein everyone winds up covered in teeth marks.
Posted by Sheila at 5:24 PM

I love this post so much. Finally a good use for my $90k liberal arts degree!