My little girl is two

Last week was Miriam's birthday.  It's not a shock that she's two -- she's been acting two for months now.  The boys were puzzled on her birthday, saying, "She doesn't seem any older!  She talks the same!"  I pointed out that she's a lot older than she was on her last birthday.  It's just that those little milestones come one at a time instead of all on one day. 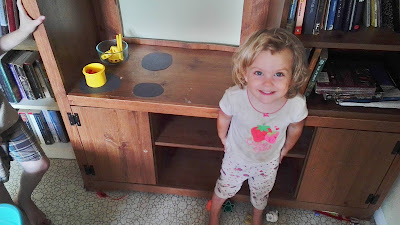 I think two is "peak cute" -- well, between two and three.  By four they're all lanky and interesting, so they're more fun than straight-up adorable.  But two-year-olds are all giant eyes and funny speech impediments.  Miriam is no exception.  Everything she does is adorable.  Her little stompy walk -- or her pigeon-toed run -- or the way she asks for "more cakey."  It's all so stinking cute that we are able to forgive her for all the trouble she causes ... which is considerable.

She talks really well, in my opinion, though other people say they don't understand it.  She says things like, "I want that pot.  Take it downstairs.  Do some cooking."  Or, "Me coming with you."  Yesterday there was a lot of spontaneous, "You are my mama.  You are my sweetie pie."  Her grammar is atrocious, but that's kind of a comfort after the stilted perfection of Marko's grammar at the same age.  Her mistakes prove to me that she's actually learning language and not just repeating.  She knows tons of words; I have no idea how many.  To strangers, she rarely says more than "hello" or "goodbye."  But that's an improvement over months ago, where she cried if a stranger looked at her.

She is very confident going up and down stairs, though she uses the handrail unless she's in a hurry.  She can't do doorknobs though.  Her life and my life will both get a lot better when she learns to open doors herself -- especially considering that she's compulsive about shutting any door she finds left open.

She is sleeping badly these days -- I suspect she is cutting her last two two-year molars.  To put her to bed each night, I lie in bed with her with my tablet and we watch "foodie," which is either YouTube's Tasty channel or Anthony Bourdain's show Parts Unknown.  There just has to be cooking.  Sometimes it takes only a few minutes to get her to sleep; other times she restlessly wiggles and moves around for an hour or longer before she finally sleeps.  She stays in her own room all night now, though I have to go in there at least once per night and sometimes a lot more.  And since I'm so tired all the time, I always wind up falling asleep on her crib mattress on the floor and waking up an hour later with a terrible crick in my neck.

In the daytime she varies between independence and clinginess.  She'll disappear into the playroom with the boys and I won't see her for half an hour .... or she'll be climbing all over me all day.  I am ready to cut down on how much she nurses, but she isn't and she lets me know LOUDLY.  We'll be at the library or the park and she'll grab my shirt yelling, "Want to nurse on THAT nursey bit!"  Or at home she'll wrestle with me to get at the goods.  With patient effort I've cut her down a little, and convinced her often to accept a cup of milk from the fridge instead, but it's a bit of a battle and I just don't have it in me to make it a bigger battle than it is.  I wanted to nurse her as long as she wanted, gosh darn it.  This was going to be the kid I was going to be able to allow to wean herself.

Her favorite toys are her dolls and her cooking pans.  Yes, very stereotypical.  I don't think I've encouraged her toward these things more than I did with the boys; but on the other hand, I know each of them had a stage when they just wanted to be exactly like me as well.  It's not like Miriam has a concept in her mind of what boys and girls are supposed to be like, and I'm not even sure she knows I'm a girl and therefore the parent she is "supposed" to imitate.  At the same time I don't think there's a hardwired part of the female brain which knows that women are the ones who cook.  I think she just likes cooking.  And unlike with the others, I've been able to let her participate a lot more with the things I do, since I have a two-year-old and no baby yet.  She's my partner in almost everything I do.  She wants to help load and unload the dishwasher, help do laundry, help sweep.  Every toddler wants these things, but usually I've resisted a lot more because chores are so much harder with toddler help.  This time, I guess I've made my peace with everything taking twice as long.  Because if she's on a chair "helping" me cook, well, she's not crying OR asking to nurse!

If there's one way in which she really is different in personality from the boys, it's that she seems more empathetic.  Marko was really slow to grasp the concept that other people had feelings and that he could change people's feelings by acting in different ways.  I mean, he was like four when he finally figured it out.  Michael was faster -- I think having a sibling helps.  Plus he's a naturally really attached, snuggly, affectionate kid.  But Miriam is even better at it.  If she sees someone sad, she rushes over and pats their back saying, "Be happy!"  Or she gives them a toy she thinks they might like.  She loves sharing toys because it makes people happy -- saying things like, "Give Michael a toy, make Michael happy!  Make me happy!"  Sometimes she grabs something the boys want and they flip out and try to grab it.  This never goes well, because she grabs all the harder and screams like a banshee.  But when I remind the boys that she often likes to share when she's asked, they try asking nicely or offering a trade, and she almost always agrees to that.

And that is one thing that maybe does come from female brain differences.  Lower testosterone means lower aggression and therefore she just doesn't have the same sort of possessiveness and competitiveness that both of them do.  She likes to please.  At the same time she does not, at all, like being told "no" or being yelled at.   She completely flips her lid when anyone, child or adult, is harsh at all.  In fact I realize I sound like I'm describing myself....

And man, is she sweet and affectionate.  The other day John got up with her and let me sleep in.  When she finally got to come into the bedroom, she dashed in yelling, "My mama, my mama!" and wanted hugs and kisses.  The same happens when Daddy arrives home -- she wants uppie, hugs, and kisses, and says, "My daddy, my daddy."

She's almost entirely potty-trained, even away from home.  The trouble is, she refuses to use big toilets, only her little potty, so if we don't bring it places, she gets very upset because she doesn't want to go in her diaper but is terrified by the big toilet.  She was willing to try the big toilet by standing up next to it, but when I told her girls have to sit, she was like .... nope.

I wish I could bottle up the sweetness that is Miriam at two and just keep it forever.  I dread the time when I have less attention to give her, when she can't be my constant helper and buddy in every single thing I do, and can't get "uppie" on request anymore.  But I enjoy it while I can.  And hey, with the obsession with babies she has, maybe she won't mind being a big sister too much. 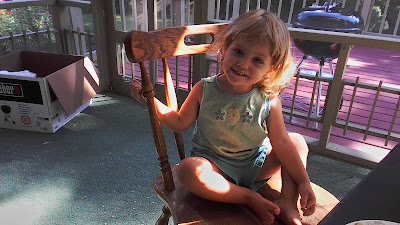 Email ThisBlogThis!Share to TwitterShare to FacebookShare to Pinterest
Labels: Miriam

A mother once said to me that if there is more than one child, each parent gets a "mini-me." I wouldn't say I've observed the same thing, but I remembered her while reading your descriptions of Miriam. =)