Today is a good day to write a post that isn't about theology.  For a change.  I don't exactly enjoy studying theology (or philosophy, or history), so having to do it (because hello, my soul is important) is kind of a drag.  Also my house gets messy when I spend the baby's whole naptime reading different theories of the dates of New Testament books.

So today I didn't do much of that and I did a lot more cleaning.  And that was actually really nice.

I have struggled to get the kids to clean up after themselves for a long time.  Marko never wanted to.  Michael did for a short phase and then he got too distractable.  It happens the same way every time:

Them: We want duplos!
Me: No, that will make a big mess.
Them: We'll clean them up when we're done!
Me: Well, okay.  (Hours later)  Time to clean them up!
Marko: It's tooo haaaard.
Michael: I'm not done with them!

So I wasn't getting out any messy toys for them, because I always wind up being the one to pick them up, but then they start grabbing my kitchen utensils, pulling books off the shelves, etc. and it's just as bad. 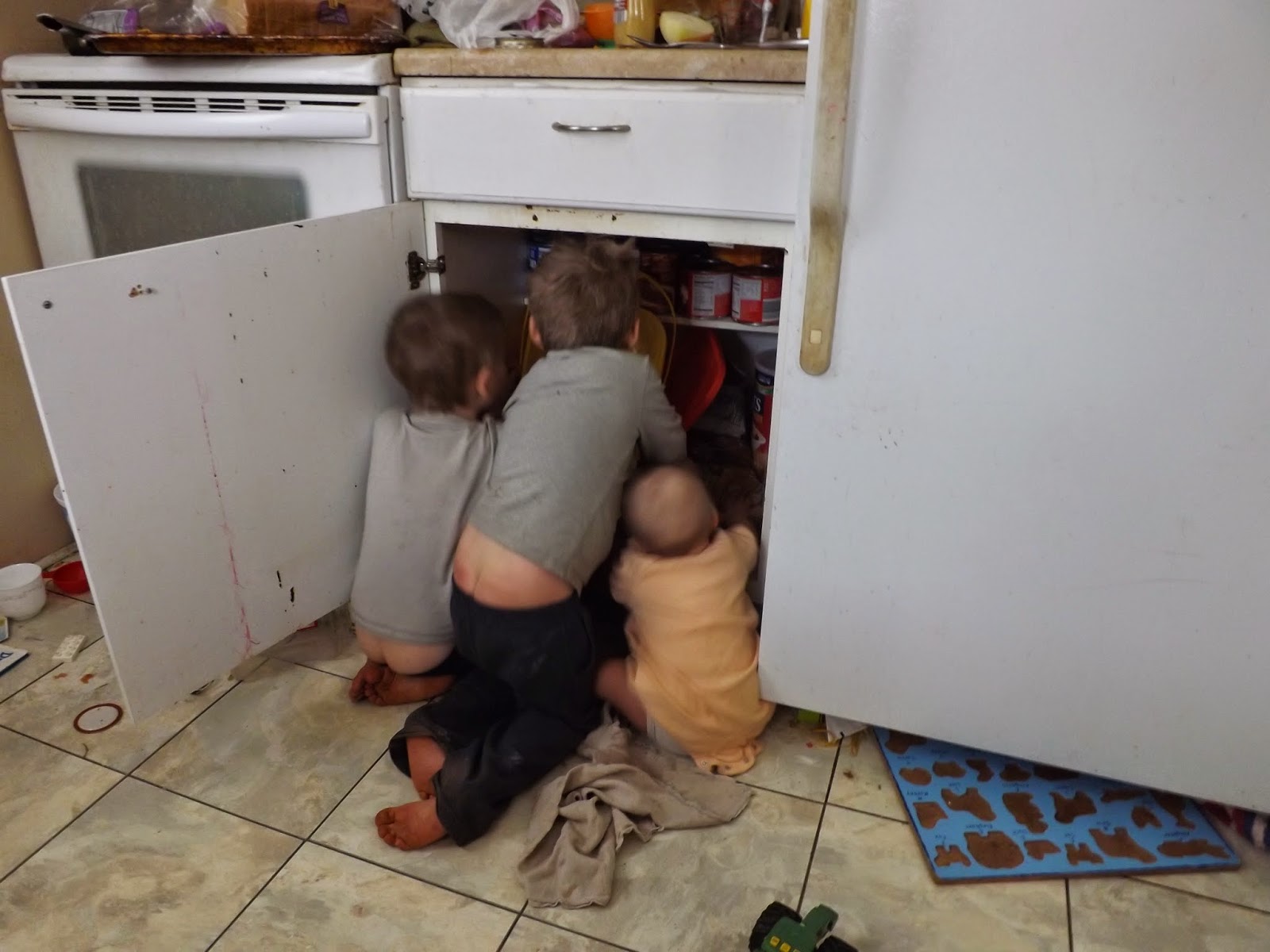 And Miriam joins in, too!

Last week I just didn't even want to deal.  I let them pretty much trash the house, knowing of course that it only meant misery for me in the future, but cleaning is (marginally) easier than policing them, so I just pretended I didn't notice.

Then around 3 pm, I said, "Look.  This place is messy.  I really don't want to clean this mess.  I'd rather watch Doctor Who.  Here's the deal.  If you clean this up with no help, we'll watch some."

It took them like an hour, because they kept getting distracted, but eventually they really did clean it up, with no help other than my direction.  And we watched a classic episode with the Fourth Doctor, which was great.  (The second it ended they started screaming and it woke the baby from her nap.  Oh well.)

So that is my new cleaning-up hack, and it works well when I'm willing to invest in it.  They have to want it bad enough to do something that they find very challenging, because cleaning is, well, not something they've done much of before.  I figure when they get better at it, it will be less of a big deal.  Maybe.

My other clean-up hack combines with a no-snacking hack.  They ask for food a lot, you see.  And half the time I'm half sure they're just bored.  But just saying "no" leads to lots and lots of whining, and you know, maybe they really are hungry!

But if I say, "I really don't feel like getting up.  Especially since I'm going to have to clean up all those blocks.  When those blocks are cleaned up I'll get you a snack" -- they usually make an effort to start cleaning up.

Then, of course, they get distracted (mind of a goldfish!) and start playing with the toys instead.  So I don't have to get them a snack.

I think I just explained how I use my messy house to avoid feeding my children.  Learn from the master, guys.  Someday you may learn to be as terrifically neglectful as I am.

Citrus is something you're supposed to introduce later, right?  She just found this peel and was really excited about it.  Who could say no to that face? 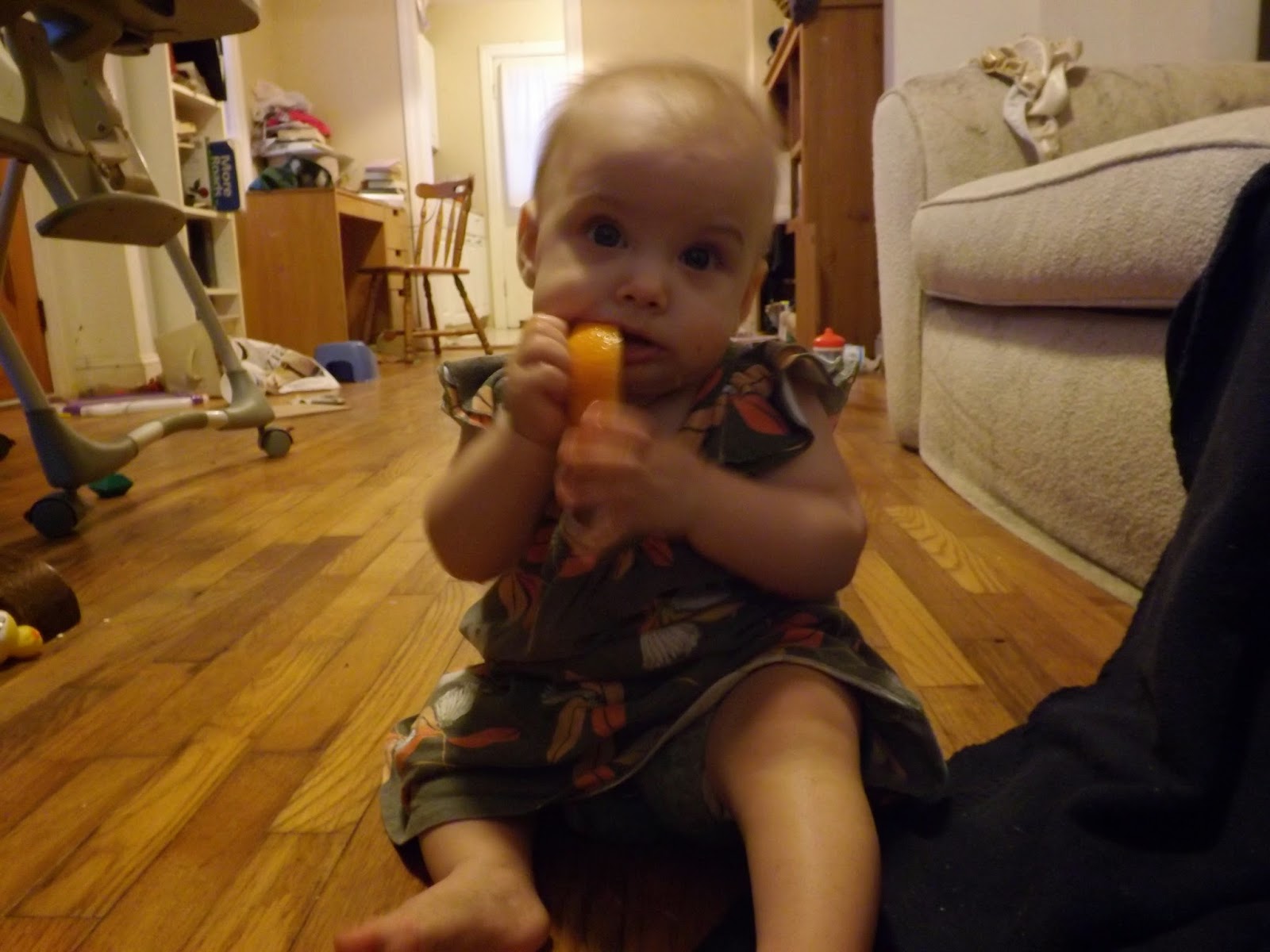 Answer: not me, apparently

She thinks she can pull herself up now.  She can't, except to a kneel or sometimes a very drunken slouch unto something low.  Then she falls and bumps her head on our hard floor.  Poor baby.  Unfortunately it doesn't stop her. 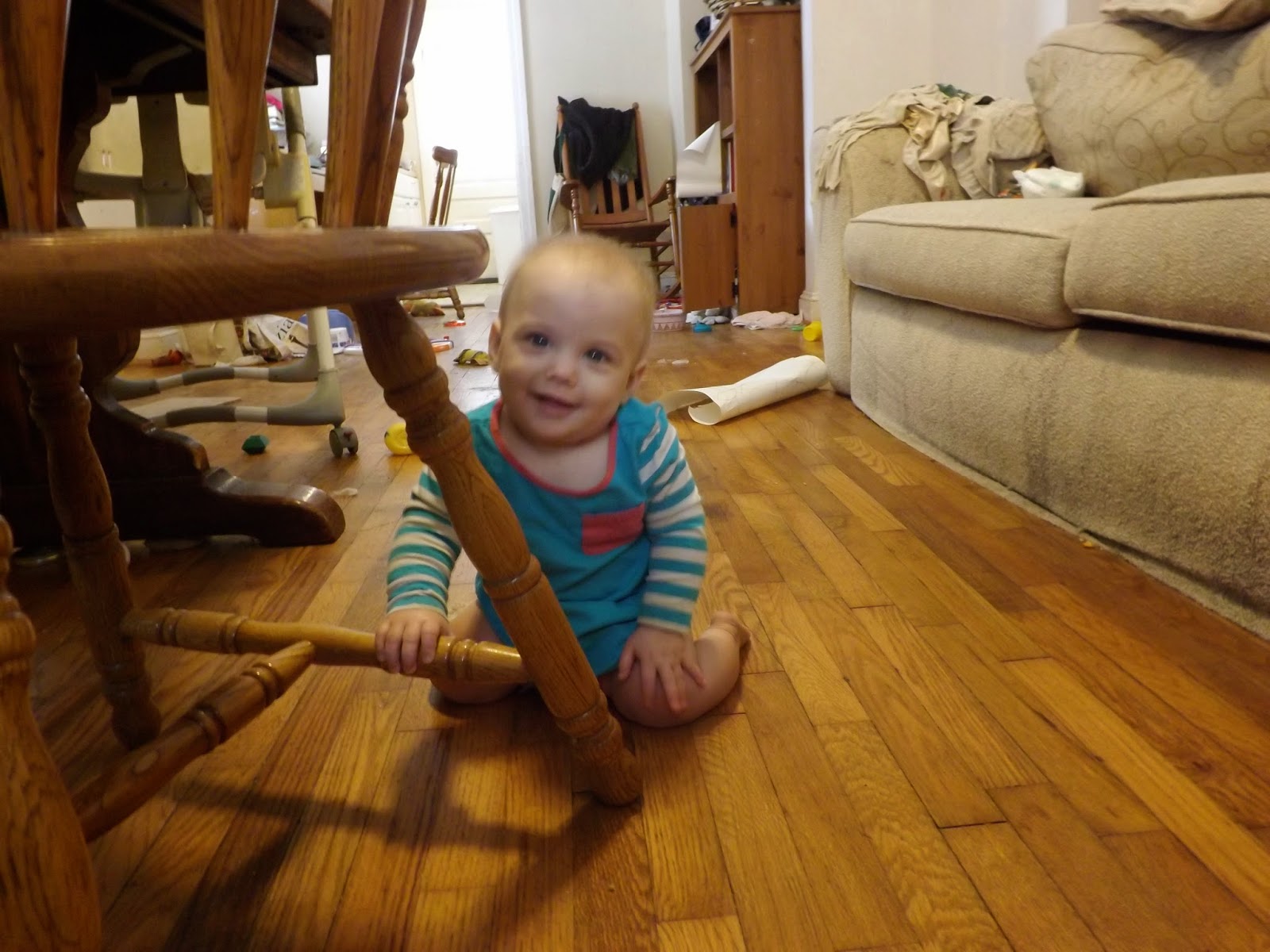 She navigates a forest of boy legs effortlessly.  It's as if she were born to it.  For their part, they forget she's there and I'm always diving at them to stop them from stepping on her.  Especially since she's never where you left her anymore! 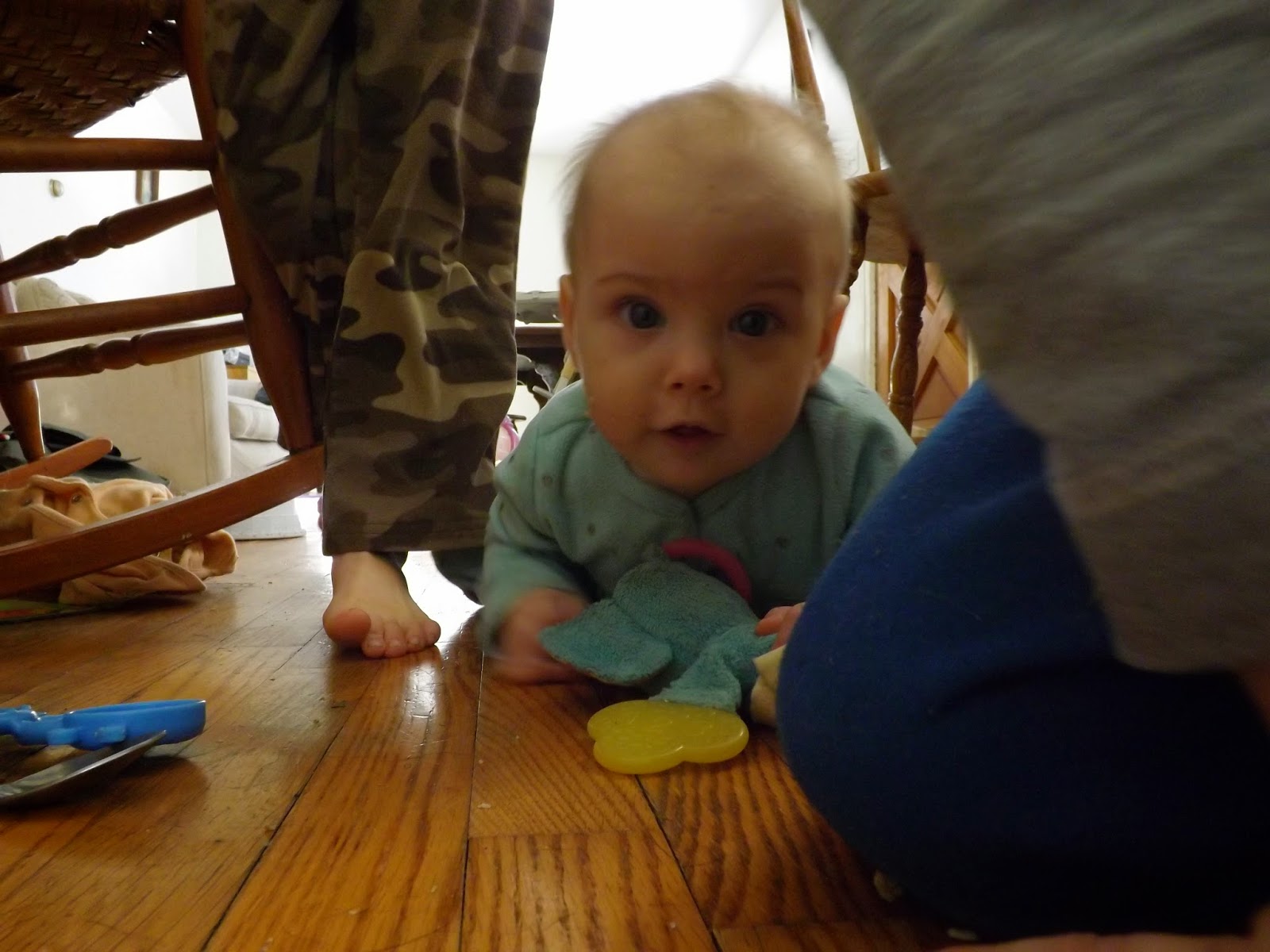 That face!  Don't you just want to squish her?! 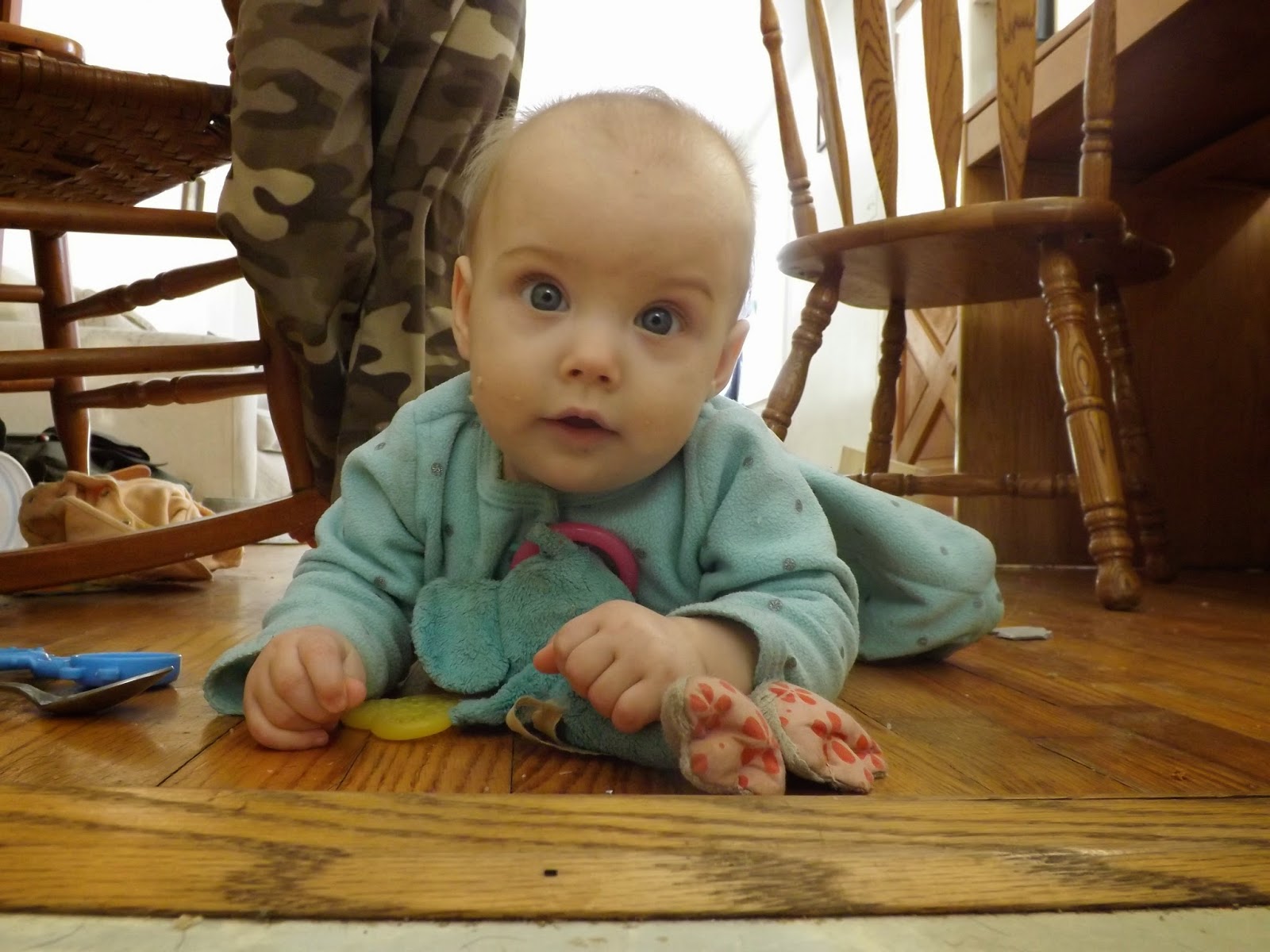 Love the picture of all three kids going through the cabinet! That's my all-time favorite part of this parenting thing-- watching the sibling relationships develop. And Miriam is too cute for words!

"I think I just explained how I use my messy house to avoid feeding my children. Learn from the master, guys."

(Seriously, that paragraph made me crack up.)

Also, I had people tell me that you should wait until after a year to introduce all sorts of things--grains, melons, berries, citrus, who knows what else. I started Jude off slowly (oh, wait, no, melon was totally his first ever food) and added ingredients one by one and had a spreadsheet of reactions and then around 9 months said "Whatever, who cares?" and just fed him bits of whatever we were eating. He ADORED peaches and plums and things when they were in season last year. (Technically not citrus, but acidic, so probably his stomach lining is ruined forever or something.)