Hoo boy, what a week.

First, I was doing a load of wash.  (I call laundry "the wash" and a washing machine a "washer."  Is this wrong?  John makes fun of me for it, so it's probably a Northwest thing.  Or a my-family thing -- being military on both sides, my family has its own jargon which I can't always track down.)

Anyway, it was still agitating and hadn't yet rinsed when I smelled smoke.  Went into the laundry room and the whole room was smoky.  So I shut off the washer and messaged John, who said something was probably burning out inside.  Maybe the motor?  Neither of us is an appliance expert, but we soon suspected it wasn't fixable.  I mean, the thing has got to be at least twenty years old; it came with the house.

Sometime in there, can't remember if it was before or after the smoking-washer problem, Michael spilled a cup of milk on my laptop keyboard.  And what's worse, he failed to tell me he had done so, so I didn't find out till I was done with whatever chore I was doing and tried to use my computer.  I poured all the milk out and restarted, but still nothing.  The trackpad worked, but nothing else.  I managed to take the password off so I could surf the internet, but you can't do much without a keyboard.

Especially work on your novel, if you happen to be writing one, and have had to take weeks off for Christmas break anyway, and are eager to get back to it lest your inspiration shrivel up and die.  Oh, woe.

The bright side of all this is that, on the one hand, we are a two-computer family, so I have been using John's.  It has some disadvantages, like the fact that it's in the corner where I can't watch the kids as easily, and that he sometimes likes to use it too.  But it's keeping me connected .... though no noveling is happening right now.

And on the other hand, I find a replacement keyboard -- something I could plug in and use -- would only cost about eight bucks.  Don't you love how technology just gets cheaper and cheaper?

Then we went for dinner to a friend's house, but we forgot to tell them John doesn't eat gluten, so they served us pizza.  It had clearly been specially made just for us and they were quite anxious about whether we would like the toppings ... neither of us could figure out a polite way not to eat the pizza, so he just ate it.  And was correspondingly rather sick.

Also we had underestimated how late we'd be out -- we got back at 9 pm with three very tired kids.  The boys readjusted within a day, but were crabby for many more days.  Miriam, after a week, has only cranked back her bedtime to 8 pm.  It used to be seven.  Sigh.

For a day or so, the laundry just sat all soapy in the washer, but eventually I got up the nerve to stick my hands in the icy water (our laundry room isn't heated) and fish out the laundry.  Rinsed it in the tub, thank goodness the dryer works!  So we had clean laundry at last.  Normally I do wash at least every other day, or I run out of cloth diapers.

And then some friends of ours offered us an old washer they weren't using, so John went out there on the weekend to get it.  I stayed home dealing with the monsters -- seriously, much of the week they have been at each other's throats -- and thanking my lucky stars / God that we have such good friends who just happen to have a spare washer.

But when John got it home, it was quite a chore to get it down one set of concrete steps (the ones that lead from the road to our yard) and up another (the ones from the yard to the backdoor), especially considering there were ice patches.  But we got it done, and John hooked it up.  We did a load, no problems.

But a little later I went into the laundry room for something and found a small puddle.  Uh-oh.  I cleaned it up.  The next morning I went in there and found a lake.  We cleaned it up -- using the broom to sweep the water out the backdoor onto the concrete steps, where it promptly froze into a solid sheet of ice -- and turned off the taps that feed the washer ... our thought being that that must be where the water was coming from.  But we got one more little puddle even after that, so I guess not?

So, having two separate washers fail on me, I set to washing clothes in the tub.  Because whatcha gonna do.

Luckily I had read a handwashing hack a few years back that has revolutionized washing clothes without a washer.  You put the clothes and water and soap into a big, tall bucket (we have all these cat litter pails that we save; they are the best) and agitate it with a toilet plunger.  (A clean one, yes, though I don't believe this nonsense that you have to use a never-before-used plunger.  Rubber is cleanable.  I poured some boiling water on ours and called it good.  Anyway I was washing diapers, so ....)

You plunge up and down and change the water when it looks really dirty, and after a few rounds of that, the stuff is pretty clean.  I miss the spin cycle more than anything, because handwringing is tiresome.  But the kids helped a lot, especially with the plunging part.  I told them only big strong people could do it, so of course they were fighting over it.  Of course the novelty has somewhat worn off by now.

Of all life's modern conveniences, the only one I really feel I need is the fridge.  but second place surely goes to the washing machine.  Laundry is the work of maybe ten minutes a day with it, and close on an hour without it.

This weekend we're going to open it up, with the help of our handiest friend, and see if there's anything to be done.  I sure hope so, new washers are expensive.

Somewhere in there, I'm losing track now, was the morning I woke up and thought, "Gosh, I'm freezing!"  Sure enough, the oil was out.  If you've been following our oil tank woes, you may remember that we had a plumber out recently to take apart our oil line because the kids had shoved something down there.  He found a bunch of sand and leaves and said it was clear now.  Well, we called the oil guy out, he tried to fill the tank, but no dice -- it all sprayed out again.  Got the plumber back out there, he went further down the pipe, and guess what he found? 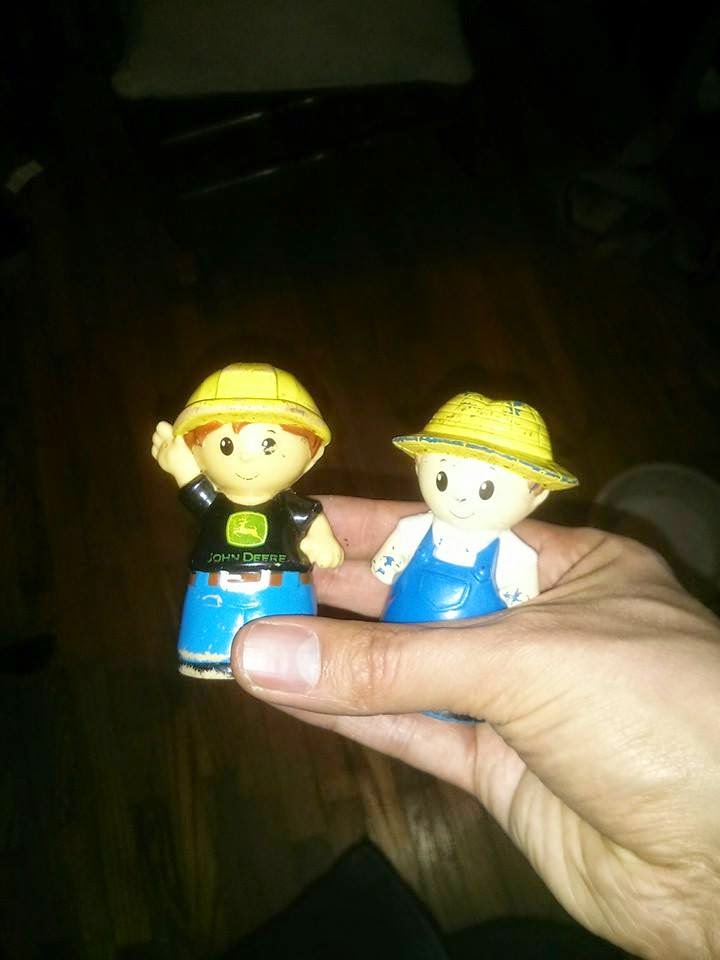 Oh, how I love my children.  So much that I didn't even kill them for this.

That was last week, and we hadn't yet had time to get the oil guy back out here, and so our tank ran dry.  It was very cold.

Luckily, or rather because of very good advance planning, we have a kerosene space heater, meant for power outages, and so we did not actually freeze or anything.  Still, you try keeping a toddler and a preschooler from touching something that interesting and also on fire.  And from running headlong around it, wrestling right next to it, etc.

Took about three days, but we have a full tank now, and boy does it ever feel nice to have heat throughout the house.

The other day, I had a friend over who has two kids and is pregnant with the third.  I badly wanted to tell her that having three kids is not so bad, but you all know that this past year has been one of the roughest ever, so what could I say?  Then I thought about it, and thought about it, and realized .... this week I have had all this crap happen to me, and I actually have handled it fine!  I'm not screaming at everybody like I was when I was pregnant.  I'm not constantly tied to the baby like I was when she was a newborn.  She's almost five months and not really that hard to deal with.  The boys are getting over their cranky week and aren't fighting more often than once an hour or two.  I'm able to do the wash by hand and it hasn't stopped me from doing the dishes or tidying up the living room in the evening.  Yesterday I even baked bread.  If we can get our washer fixed, maybe I'll even be able to fold that massive basket of clean stuff in my room!  Or clean the kids' room!

I am actually handling things.  I'm handling them somewhat gracefully.  And I mean that in the strictest sense -- it is clearly a grace, a gift, that I am handling them.

Having a baby means, for me, a year of barely staying afloat -- nine months of pregnancy and three months of having a newborn.  And that year . . . is over.

I foresee better times ahead.
Posted by Sheila at 3:08 PM