I have to say this now, since I worried so much before:

Miriam?  She actually sleeps!  Like, for long stretches!  And now I can put her down!  She does have to be held for a good 20 minutes after she's shut her eyes to make it work, but the bright side is she doesn't care much what I'm doing for that time period.  I can walk around.  The boys can screech.  Unlike either of them, she's not particular. 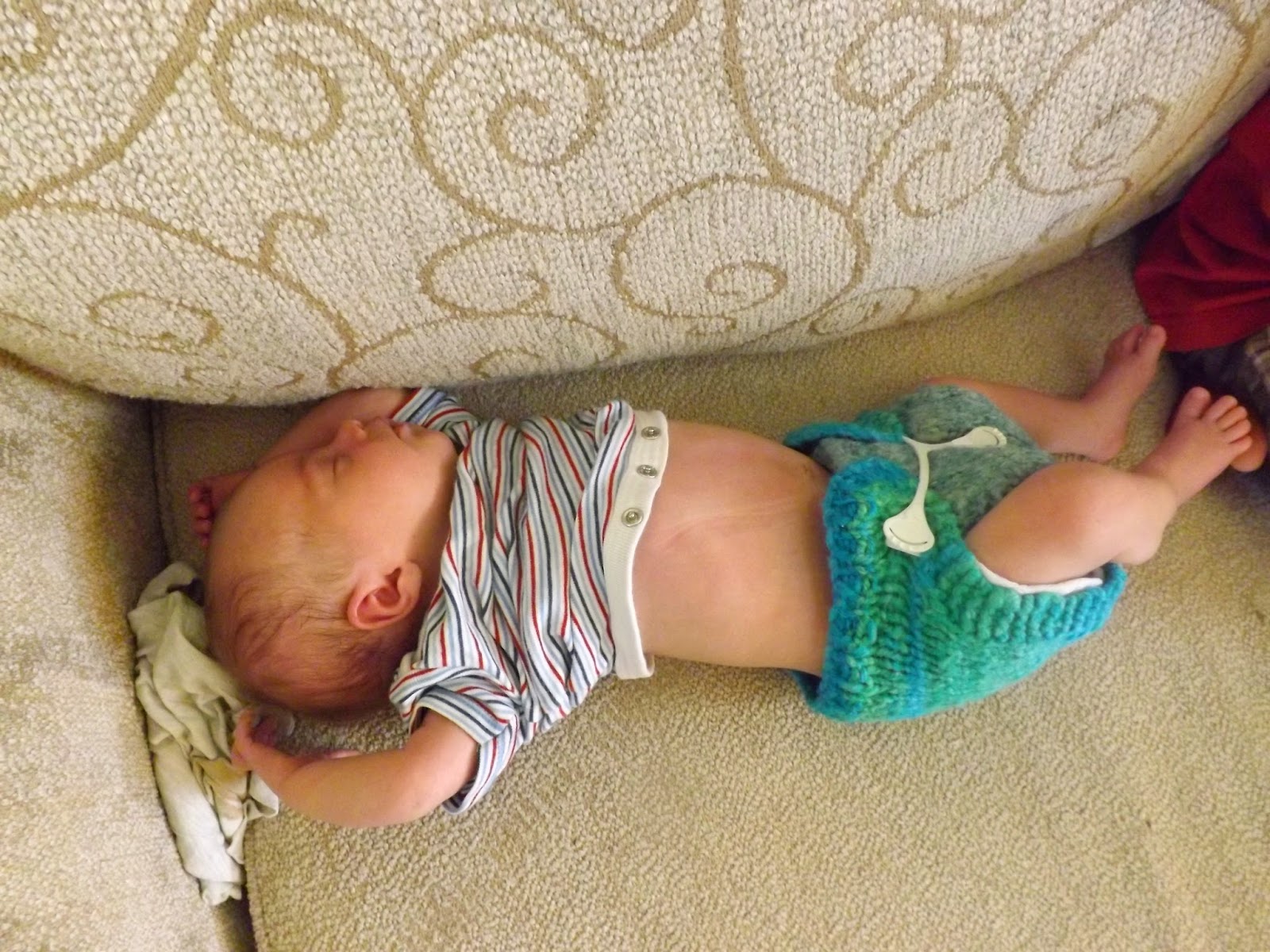 I don't actually let her sleep on the couch; that would be unsafe

So, just by rearranging chore time and rest time, I can fit in all the really essential chores during her nap, and then do all my internet goofing around and other fun stuff while I'm holding and nursing her.  The only thing that's tough is getting the house tidy in the evening, because if I have it perfect by, say, 5:30, it doesn't matter because from 5:30 to 6 the boys will trash the whole place.  Miriam gets a bit demanding at that time of day, but it's frustrating for me because I like a clean house when John gets home.

Miriam's bedtime still floats around a bit, between 7 and 9 pm, but I do somehow manage to get all three kids to bed without any major crises on those nights John is out, which is really amazing to me.  It was much harder with Michael, because Marko's bedtime was so involved and Michael just couldn't be put down.  I remember one time I finally got Marko to bed at 11 pm and then just had to go to bed with my jeans on because if I put Michael down for a second to change, he would scream and wake Marko.  It was the worst.  I am so relieved things are going better this time.

If I had to pick, I'd say she's more like Marko, except she eats great.  Not constantly like Michael -- but she doesn't resist it either.  She latched on maybe ten minutes after birth, and after a day or so of working on her shallow latch, she figured it out and I have had no pain.  I've had plenty of milk, but I've been careful about having her finish one side before switching, so I don't have an oversupply either. 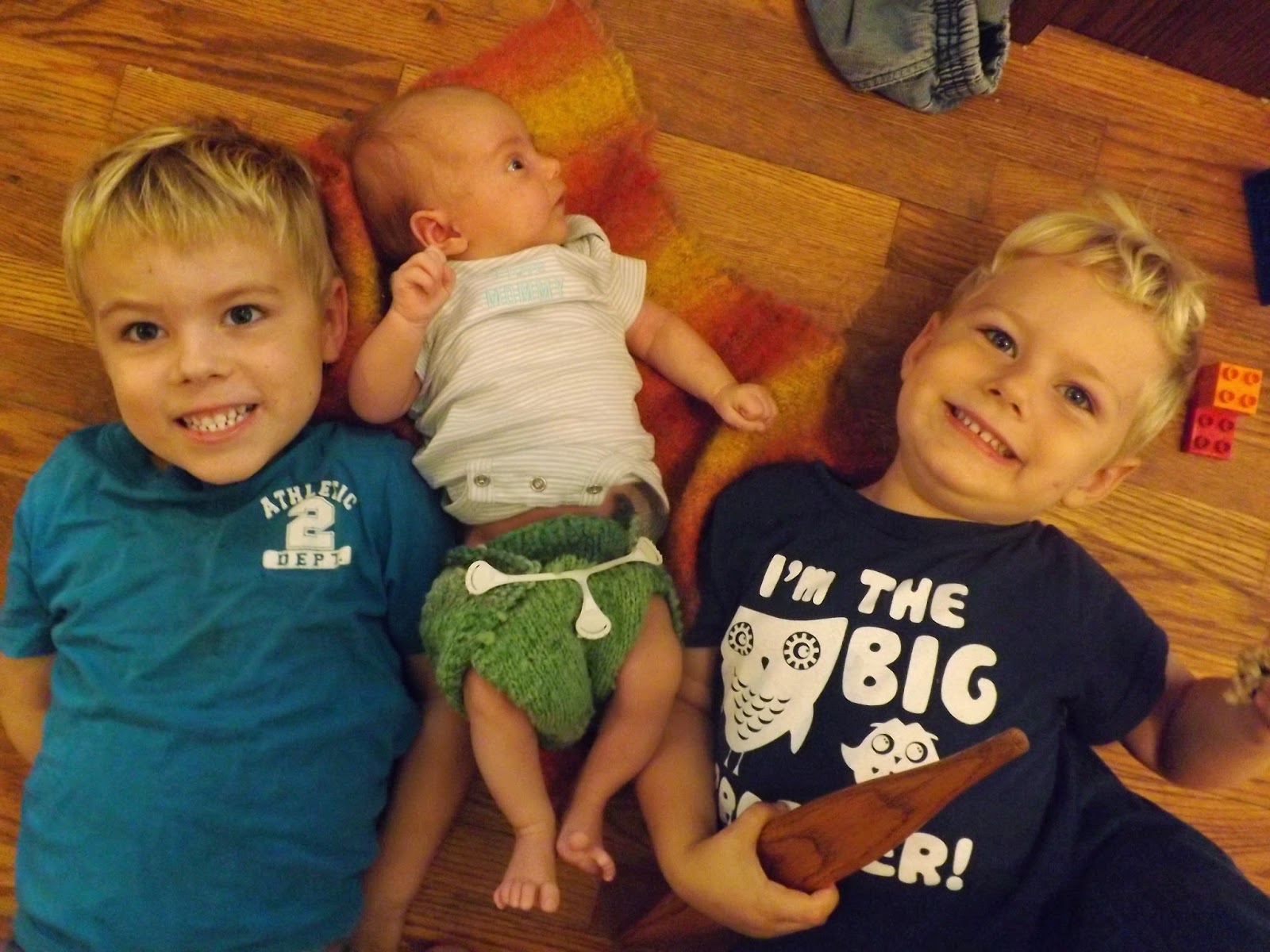 They are still pretty ambivalent about her in real life


But she's like Marko in her easygoingness .... which is funny because he's not easygoing now, but as a baby he really was.  Long naps, efficient nursing, no spitting up, not fussy, loved being in his bouncy chair.  And Miriam's the same.  She doesn't even cry -- more gives a short squawk and then waits for us to pick her up.

Speaking of nursing, I was terrified Michael was going to take to tandem nursing by demanding to nurse every time Miriam did.  And so I've been really careful about setting limits, saying no sometimes, and really only saying yes when I actually wanted to nurse him for one reason or another.  As a result, he's been nursing once a day, tops, and gone many days without it.  I think we may be close to weaning .... I'm not sure, because I have the feeling that if I just let him nurse whenever he wanted he'd soon be nursing constantly.  Who knows.  But for now he doesn't really cry over being told no, and I'm happy about that.

The awful moments are when I'm rocking Miriam, she's almost asleep, and then Marko and Michael both grab the same toy and start shrieking.  That doesn't even necessarily wake her, but then I have to leap up and rush over to split them up and that wakes her.  Drives me nuts.  But that doesn't happen all that often, because with her taking actual naps, I have plenty of time to spent with each kid and that really cuts down on the rivalry.  People say "it's okay that babies need to be held 24/7, because you can just put them in a wrap and do what you normally would!"  Well, the one thing you can't do while holding a baby is give exclusive lap time to your other kids.  They don't feel it counts.  And then they sit on the baby.  So no.  "Down naps" for the baby are just essential and I am very happy she takes them.  I also find that my mood on any given day goes up and down with how much Miriam has been out of my arms.  I feel so much more human if I'm not holding her all the time. 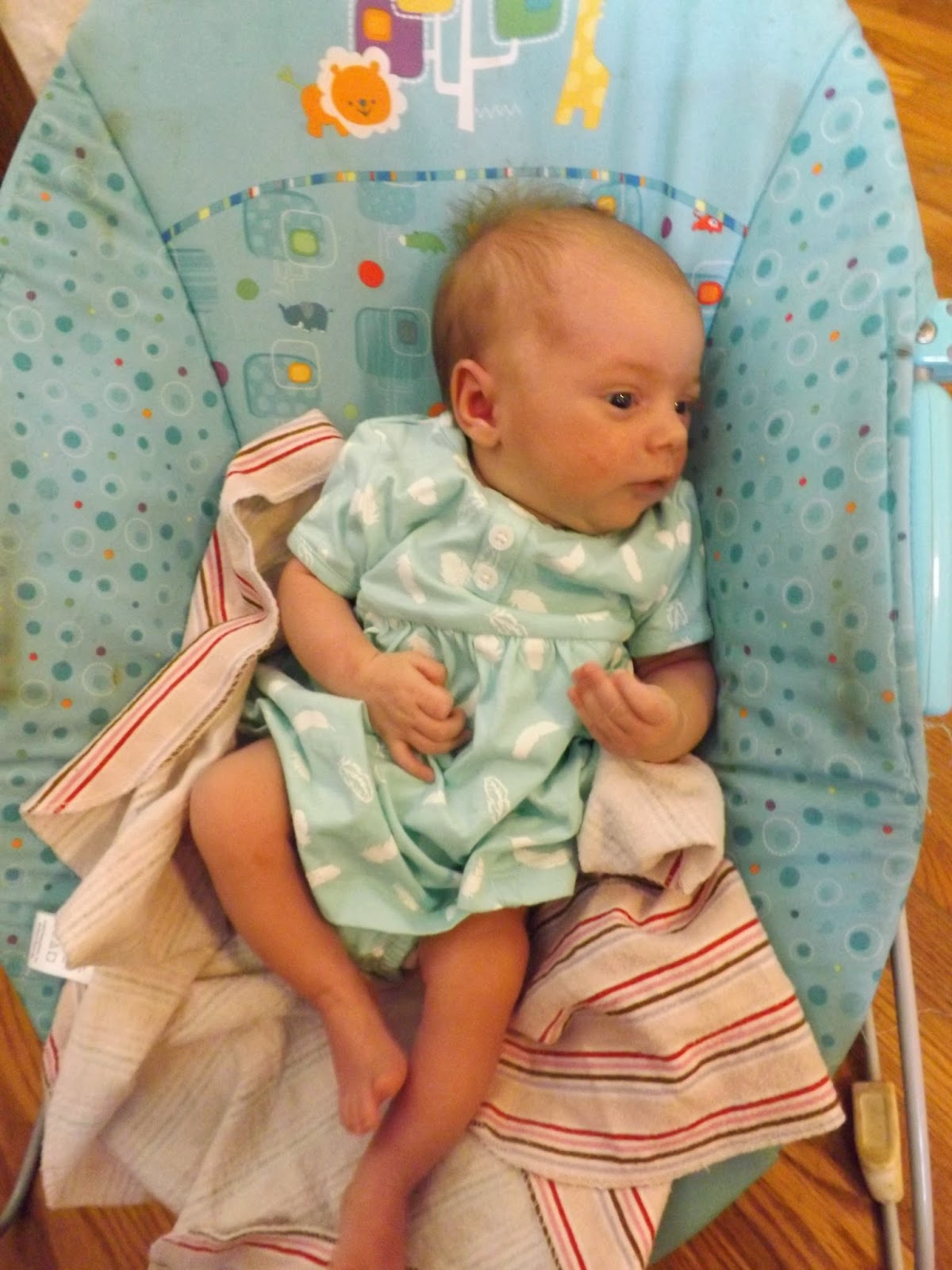 However, you know what makes long nursing and holding sessions more fun?  Good reading material.  I was feeling rather frustrated with it all, and then I found that Lois McMaster Bujold released the digital text of her Vorkosigan Saga for free!  It's not all available online in one place, but so far I've found sources for all the books I've searched for.  I really enjoy her work.

If the big kids are elsewhere -- for instance, when John works late and I've put them to bed -- then I can nurse while watching Dr. Who, which is even better.  (Not far in, so don't spoil it for me, please.)  I love the cheesiness, but I kind of hate the constant switcheroo of characters and actors.  I get very attached to people.  So far I seem to be annoying all the "real" Whovians by liking all the wrong people.  Oh well.

Another thing that's hard to do while holding a baby is knit, so I thought it would be ages before I could do any.  But nope, I managed to finish a diaper cover and now I'm working on some baby leggings.

But as anything much more complicated than that is beyond me, it's a good thing that Tiffany knitted this sweater and hat for Miriam.  Aren't they the cutest? 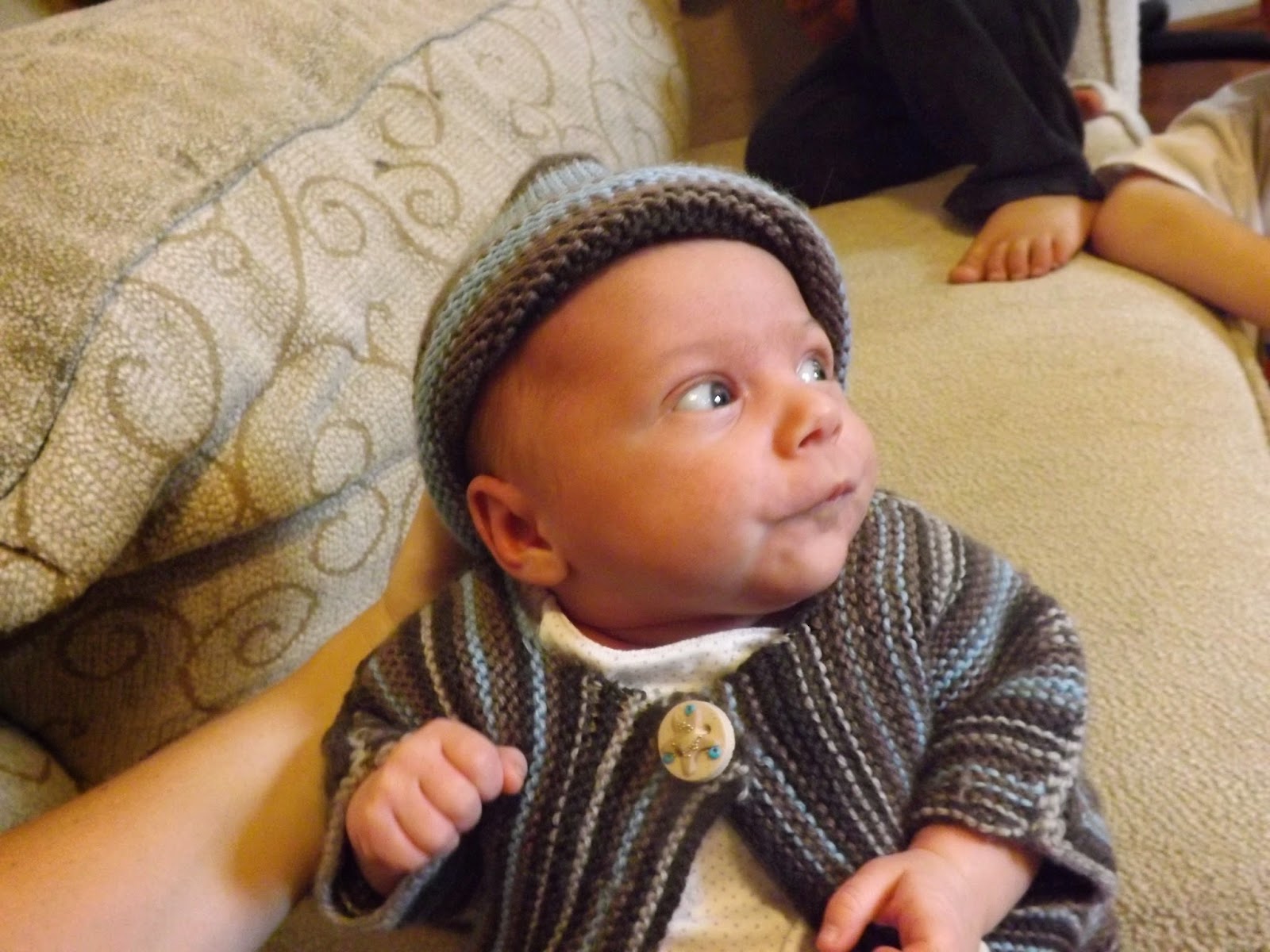 It can be hard to interact with a newborn.  They don't exactly make eye contact, because their eyes get crossed, and they don't smile, and they don't play with you.  But I just love holding Miriam, looking into her little face, and watching her flail around.  She seems so alert and aware already, and she makes so many faces. 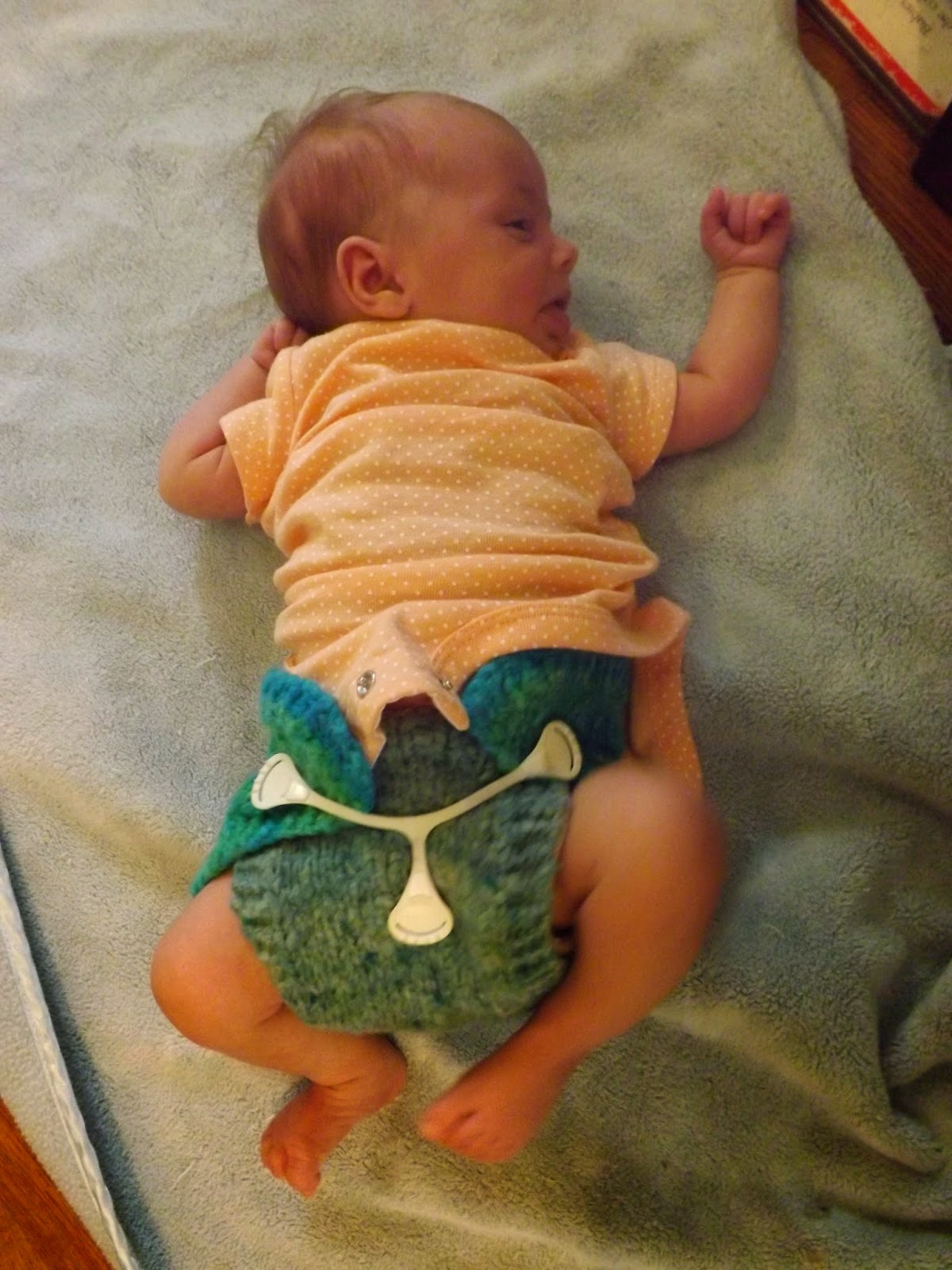 Yeah, this is actually pretty cool.

Linked up at Conversion Diary.
Posted by Sheila at 12:25 PM

YOUR BOYS ARE SO BIG WHEN DID THAT HAPPEN?

I'm also glad Miriam is going easy on you. And I'll leave it at that so I don't clog up the comments with my tales of high-need-newborn woe. (I think I am only just now starting to realize how traumatizing it was, so I annoyingly talk about it all the time.)

I know the feeling. I could barely talk about how high-need Michael was -- and I barely had a chance to anyway, since I was so busy taking care of him -- until magically he started moving around and became a pretty easygoing kid. And I think how tough Michael was as a newborn is the main reason I was so terrified to have Miriam. I was just traumatized by the whole thing.

Oh, and apparently they turned enormous the moment Miriam was born, just by comparison. Michael and Marko are both 36 pounds! Little giants.

I have meant to comment on this for weeks. :0 Miriam is just *beautiful* and so adorable in her new handknits. :) So pleased that they're a bit big on her so that she can use them longer in the cool weather. Yay! So glad things are going well for you.

I'm glad Miriam is such an easygoing baby! :) Since you have two boys already, I think an easy baby is what everyone in your family needed.

Rosie has always been a high-needs baby. Most of the time, it's not too bad. The worst thing that happens is that chores don't always get done when I want to do them. Honestly, I actually expected her to be more difficult, so I was pleasantly surprised! She's always happy and sleeps well at night, and those two things make up for a lot. :) She's going through an especially needy phase at the moment, but I know it won't last forever. And, honestly, I can hardly blame my own child for being like her mother. ;)

Your children are just beautiful! (Maybe you need one of those spray bottles to douse the boys with a bit of water, so you don't have to get up and break up the fights???) Glad you found some good reading material, too!