7 quick takes, for real this time

Second trimester is really not bad.  First is full of sick whining, and third is full of feeling-like-a-whale whining, but second is being noticeably but not ridiculously big in the gut, having energy, and occasional twitches from the baby that aren't roundhouse kicks yet.

My back is still holding up okay, though I've thrown it out a bit a few times.  My stomach, though .... it's being weird.  I have had hardly any appetite since I got pregnant, which is weird because I'm trying to grow a whole new person while also nursing the one I already had.  Of course, it's hard to listen to your appetite when the kids are demanding "make yourself a giant sandwich so we can have bites!" and then taking two bites and leaving the rest to you.  So I am eating about what I always have.  I worry what it's going to do to me to always be eating like the human garbage disposal I have always been when suddenly I don't feel like eating.

Then just this week I have felt kind of lousy the whole time, and thrown up twice.  I blame Marko's birthday cake.  Even when I ate only a tiny bit, I felt like I'd been swilling battery acid.  And it was a good homemade cake!  So, either I'm developing a chocolate allergy, or SOMEthing, but you know it's bad when I willingly pass up cake.  Not worth the risk of seeing it again.  I'm also trying to be more conscious about how my stomach feels and not throw anything else down if it already feels iffy.

That reminds me to tell you about Marko's birthday!  It was Monday and now he is FOUR, can you believe that?  Four is a Big Kid!  No way is Marko a Big Kid!

Oh, sure, he's got no shortage of long arms and legs and certainly doesn't look like a baby anymore.  But just try telling him to put his clothes on, or his shoes on, or go to the potty all by himself.  He melts into a puddle of infantile helplessness.  My goal for him at three was to dress himself ... and he has not made one single step in that direction. 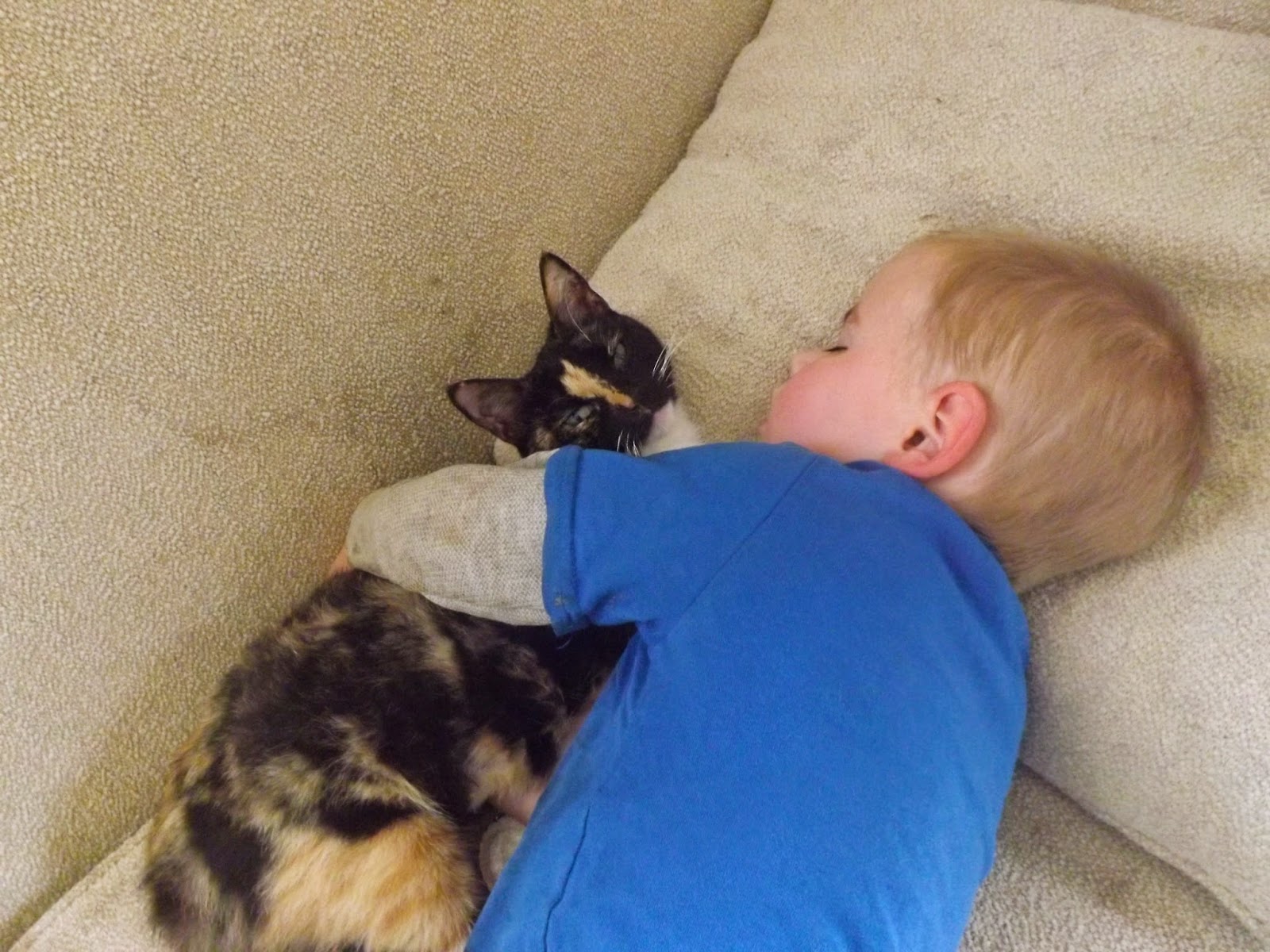 This never happens: Michael was napping (already not the norm anymore), then Marko and I passed out together on the couch, along with the cat.  The cat liked the snuggles a lot less when I subtracted myself from the pile, but she actually did stay there till he woke up!

I asked around and found lots of people who said their kids were like that too at four.  Perfectly capable (as I know Marko is) but just want to be helped.  So, whatever.  It's infuriating to do things for a kid who can do them himself, but it's not terribly much work.

I also sort of hoped he could be helping me cook or clean by this age.  And it seems he could.  But he is the world's worst direction-follower, so while I'm saying "now we stir until it's all mixed together," he is grabbing more eggs and throwing them in the bowl.  I ought to stick with it, but BOY is it more work than doing it by myself!  It's like trying to bake a cake while also herding six cats.  And that's if Michael is napping and not trying to climb up the stool and grab everything off the counter.

Oh, I should talk about Michael!  He has hit that delightful stage of mayhem-causing, which I mind less because it's following a stage of weepy clingyness.  I feel proud of his independence, even if its main expressions are throwing my keys into the bowels of the couch, emptying a container of baking powder on the floor (which Marko had given him, natch), eating candles, pulling off computer keys, filling up vessels of water at the bathroom sink and then dumping them dramatically in the middle of the living room ..... ad infinitum.  He doesn't slow down.

Take this dialogue from the other day, after he had filled a container in the dirt pile (yeah, we have a dirt pile) and emptied it carefully into the plastic bag full of llama fiber I was spinning: 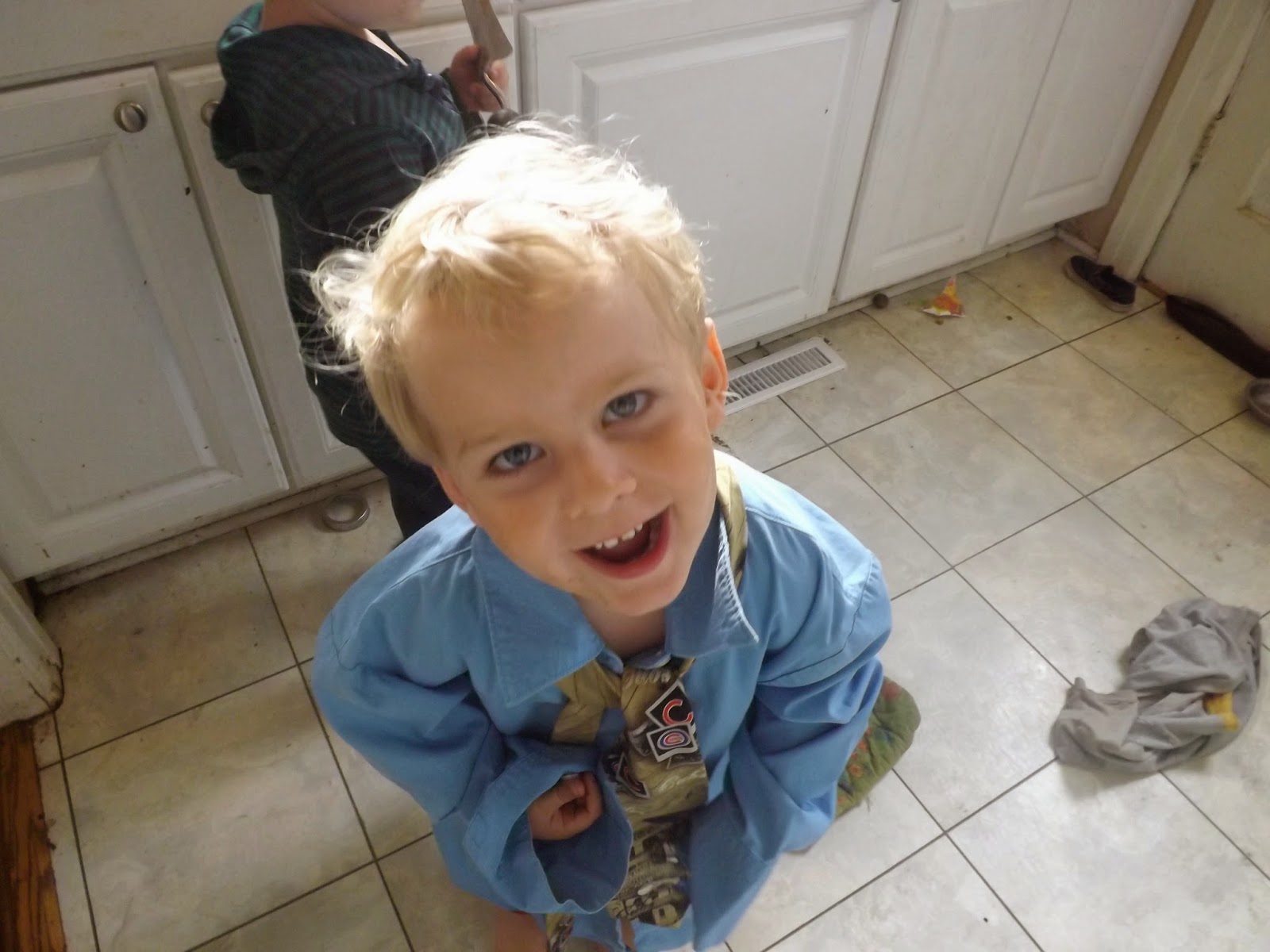 He's trouble, that's what he is.  Thank goodness he's so cute.

John is working incredibly hard at his new job.  He comes home with a half-hour long run-down of all he did ... moved boxes of books from one building to another building, cleaned up messes that had been there since 2006 (that's how long they've been waiting to get a librarian!), taken over a job that "needed to get done" that no one's been doing for months.  I say, "Oh, poor you, having to work so hard."  And he's like, "No way, this is awesome!"

Hard workers are very weird to me.  It's not in my blood.

Spring is here at last -- took its sweet time getting here, didn't it?  I would love to compare this year's with last year's, but apparently last year I wasn't very good about updating my line-a-day journal.  I did work out that the last snowfall last year was March 18th, compared to this year's March 30th.  I was having migraines last year at this time "for no reason," but I am having them again now and I think it's because of the constantly changing weather.

My plum tree is blooming at last, but it has way fewer blossoms than previous years .... so perhaps for once we will not get a bumper crop.  It must have been harmed by some of the late freezes and snows.

Yesterday, though, was the first actual short-sleeve, windows-open day, and I loved it.  I just soaked it in.  I have been cold way too long.

I'm about a week ahead on gardening compared to last year, despite it being colder, because last year I was awfully behind.  I have planted peas, lettuce, spinach, beets, and chard, and at least some of each of these appears to be coming up.  I need to plant carrots, but first I have to get more seeds.  (That holds me up every year!  I need to check over my seed supply in January instead of waiting till it's planting day to find out what I haven't got.)

Yesterday I transplanted broccoli and cabbage .... mixed, because I forgot which were which and they look alike at this stage.  They are really too little to be transplanted, but I have so little sun in the house I'd be waiting another month if I waited till they were really ready -- especially since I lost a week by letting the seeds dry out and having to start over.  And so far almost all of them are still alive!

One of the biggest thrills of spring is pulling aside the mulch from winter (mostly just old leaves) and finding how soft and crumbly the soil is.  Soil left bare all winter turns into brick, or else gets covered by weeds, but mulched soil is worm heaven.  I don't dig or rake it at all -- just poke in holes for seeds, or even just sprinkle them right on top and press them in a little.  Seems to work.  Our heavy clay soil will brick the seeds right in if I put them too deep.

Seraphic coincidentally (unless she reads my blog, but I don't think she does regularly) talked about God not being masculine after all, and I loved her post.  Since she has a theology degree and everything, and is more traditional and less feminist than me, I think she's a trustworthy source!  In short, she says calling God "Father" is really only by analogy.  The only person of the Trinity with a gender is the Son, and only because he was made man.  This is oddly reassuring to me.

More of the same at Conversion Diary.
Posted by Sheila at 9:15 AM

That picture of your son Michael is DEFINITELY one to use for his 21st birthday celebrations!!!!!