A glimmer of hope

I'm sure you don't need one more person telling why we shouldn't get involved in Syria.  Most Americans agree, and only 9% want to commit to war with Syria.  Briefly, I think we are likely to do more harm than good.  Any action we take against Assad will help the rebels to win, and those rebels are radicals allied with al-Qaeda.  Once in control, they will oppress the people even worse than Assad does.  Already, they have been initiating violence against innocent minorities, specifically Christians.

Anyway, our track record isn't good.  It seems every year or two there is some situation that we absolutely have to get involved in, and every time, we commit more than we meant to, stay in longer than we meant to, and when we finally do go home, we leave the country worse off than it was before.

But I don't need to convince you of this, because odds are good you already agree with me.

Until recently, I thought that didn't matter.  All my life, I've felt that war isn't something I have any control over.  We're just supposed to pray that the grown-ups make the right decisions and keep us out of it.  But if the order comes to go to war, that's what you do.  Growing up in a military family, this always caused me a great deal of anxiety, and I prayed for peace many times.  But my prayers weren't answered, and I felt like we just had to deal with it.

I figured this time it would be the same.  Obama had made up his mind to get involved, and it didn't matter to him how many of his people were opposed.  He doesn't have to face re-election.  And whatever his reasoning is -- fear of losing face when he said he would punish Assad if he used chemical weapons, or a desire to "stimulate" the economy with a massive bolus of war spending -- none of the counterarguments seemed to matter to him.

But I am tired of waiting for our leaders to tell us what we can and can't do.  I'm tired of opposing this law and supporting that law, voting for this candidate and against that candidate, and never being heard.  And it just boggled my mind that everyone I know, every facebook friend I have, appeared to be agreeing for once on this one single topic.  If we ALL agreed, why were we here talking to each other instead of putting some pressure on the President?

So I called the White House.  I tried to do it by email, but the White House website 404'd me instead of submitting the webform I'd laboriously filled out.  The switchboard itself was busy and I had to wait for half an hour to talk to someone.  They said they were experiencing unusual call volume ... that, in itself, gave me a little stab of hope.  My main intention in making the call was just for my own conscience.  More and more lately, I've been making decisions that I know won't do a lick of good, just because I am tired of doing things the easy way.  I didn't want to just sit back and let this war happen without even saying something.

Apparently I'm not the only one who felt this way.  A day or two later I saw this: 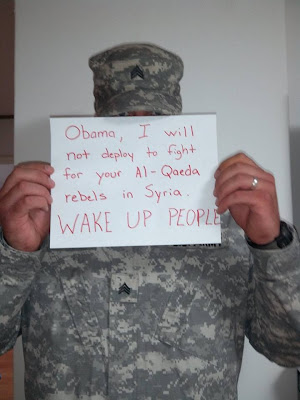 For those who don't know, this is absolutely unprecedented.  Soldiers do not refuse to deploy; I've only once heard of one who did, and it wasn't political.  They don't refuse because they are volunteers -- they chose to join up, and politically they tend to support foreign intervention or they wouldn't have joined.  And they don't refuse because they will be sent to prison if they do.

But I wonder if Obama looked at these pictures and thought, "How many soldiers feel this way?"  It doesn't have to be the whole military.  If even a few refuse, if he has to put them in jail, how will the public respond?  Will there be riots?  No one wants to go to war with Syria.  Can he really force us without reference to anyone else?

Well, he backed down.  Now, he says he'll wait for Congressional approval.  For me, that is a tremendous victory.  At least we made him admit that he can't drag a whole country into war without even asking.

But the real battle is ahead, in Congress.  I'll be calling my representative and senators, and if you are American, I think you should too.  Unlike the president, every single congressman is going to have to stand for re-election at some point.  This is the single most unpopular thing they've had to vote on.  I think it's important that we let them know that not only do we oppose war in Syria, but that it's big enough for them to lose our vote over.

The whole affair has given me a big shot of confidence.  Sure, sometimes it seems like ordinary people are David, and the government and big business are Goliath.  There are so many wrongs being done, so much injustice.  If I catalogued even the ones I know about, no one would be able to keep up with reading my blog.  But if everyone stood up and tried to change things, there could be hope.

Sure, I know my refusal to buy GMO's, by itself, isn't going to stop farmers from growing them.  And I know that my decision to buy only used clothes isn't going to stop Wal-Mart from contracting with sweatshops in Asia.  My recent move to stop buying bread and bake it instead may give a few more cents to the farmer and less to the processor, but it's not going to make or break anyone's business.

But at least I know I won't be one of the crowd of people saying, "Well, I would do it, but it won't make much difference anyway."  Instead, maybe I can be part of a crowd that says, "Why not do it?  We already are, so it's not like your sacrifice is going to have to stand alone.  If we all do it, it could make a difference."

Let's stop the war in Syria.  Let's stop it right here, make sure not a single bomb gets dropped.  And then we the people, realizing our own power, can set our sights on the other battles: laws that favor big business over individuals, government spying, businesses that abuse their employees and cheat their customers, representatives who represent wealthy lobbies and don't represent us.

If we work together, if all of us agree that we're going to do something, I honestly believe we can get things done.
Posted by Sheila at 9:24 PM

Hi, Sheila, it's David.
I recently saw a post criticizing all the servicemen who've been posting (with faces hidden) to publicize their distaste for a Syria strike. It said that we join to serve, not to have opinions.
This made me sick, as I have often heard senior sailors say "You joined to defend Constitutional rights, not exercise them." The Bill of Rights doesn't have a line saying, "-unless you're in the military" after each one.
I also oppose action in Syria, partly because there is no "right" side in this fight. Both sides are guilty of many war crimes.

I saw one of those too, and it made me angry. After all, throughout history, nations couldn't go to war unless they convinced people it was a big enough deal to fight over. Having a professional military gets around that, but only as long as you can ignore the fact that the servicemen are citizens too.

If our dear leaders can't convince even 10% of the populace that this is a good idea, it starts to be increasingly obvious that defending the Constitution and the people is a different thing from obeying orders.

I'm proud that you are willing to speak up for what's right.