Recently I read Michael Pollan's book Cooked.  I'd give a review, but mostly I'd just tell you it's awesome and you should just read it.  But it will make you hungry.  Really, really hungry for barbecue and beef stew and sourdough bread and sauerkraut.  I did a lot of cooking the week I read this book.

Instead, I'll just give (my version of) his recipe for sourdough bread.  He got it from Chad Robinson, the author of Tartine Bread, and messed with it to make it with more whole wheat and more the way he wanted it.  I then messed with it some more, so who knows whose bread it's more like.

You need to have a really active starter to use this recipe.  If you bake with it often and it's been fed daily for the past few days, it's probably good enough.  If not, his recipe does leave room for adding yeast (but why would you do that?).

Pollan insists that you need to use a scale to measure things correctly.  So I did, but it turns out my scale is absolutely useless.  I thought I'd test it (halfway through adding ingredients, of course) by putting in 100 mL of water and seeing if it came to 100 g.  Instead it didn't even budge the scale -- I used 300 mL to get 100 g!  Something's wrong there.  So I just guessed the best I could and had very wet dough.  The next time, I converted everything to cups, only I forgot that it's really important to scoop the flour into the cup lightly with a spoon and then level it off.  Usually I'm eyeballing the recipe anyway so I just scoop away with the cup measure.  So I ended up with it so dry I couldn't mix all the flour in, so I had to add a whole 'nother cup of water.

Yeah, yeah, not exactly the perfect artisanal start, but sourdough is pretty darn forgiving.  Even if it isn't really the right shape or crumb or whatever, it still tastes awesome, so who cares?

Here are the amounts.  The cups aren't exact, but the proportions should be about the same, so if you don't have a working scale (like I don't) they should work fine so long as you measure properly.

NOTE: After making this bread several times and subbing in different flours, let me warn you.  Regular whole wheat flour is more absorbent than stone-ground, and white flour seems to be more absorbent still.  So if you mess with the flours, you are just going to have to guess with the water.  Basically, you want the dough to be wet, with no dry patches anywhere and not thick enough to roll into a ball.  If it's not like that, add more water until it is -- and make sure you do this when you first mix the flour and water.  Adding water the next morning doesn't work -- it won't mix in.

The way I make it, you start in the evening, ferment it for a day, and bake the following day.  So if you start Wednesday night, you can bake it in time for Friday lunch.  You can also replace the overnight refrigeration with two hours of rise time and get it done by Thursday evening, if you really want.

Make the leaven by combining leaven ingredients and 1 tablespoon starter in a small bowl. 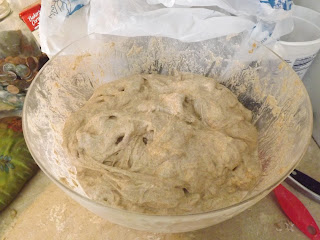 Soak the flours in a large bowl by combining them with 850 g water, mixing until there is no dry flour left.  (It should be a wet dough.  If it's firm enough to roll into a big ball, you probably have too little water.)

Cover both bowls and leave in a warm spot overnight.

Mix the leaven into the wet flour in the large bowl. Mix the salt into the remaining 50 g water and mix into the dough.  You're going to have to use your (wet) hands for this part, and it will seem like it's not really mixing in, but it should mostly incorporate with a little work.  It still will seem more like messy batter or paste than dough, but that's okay. 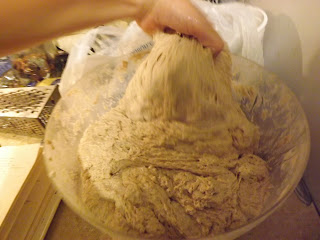 For the next four to five hours, leave the dough in a warm place. Every 45 minutes to an hour, turn the dough: With a wet hand, reach down to the bottom of the dough and fold it over the top. Turn the bowl and do it three more times around the bowl. Watch for the formation of air bubbles; smell and taste along the way. The dough is ready to be divided and shaped when it feels billowy and cohesive – it wants to stick to itself more than the bowl. It should smell mildly yeasty and slightly sour.

If it still feels really sticky, put it in the fridge and shape in the morning.  It won't hurt anything, I discovered.  Conversely, if it's really sour, you want to jump to shaping no matter what time it is.

Pollan says: "When you're ready to shape, sprinkle a work surface with flour. Spill the dough out onto the surface and divide it into two halves. Shape these into globes, using your floured hands to rotate the dough against the work surface until it forms a ball with some surface tension."  Honestly I don't know what he's saying there.  If you want you can look on YouTube for "shaping tartine bread" and get all kinds of hits.  I just sort of convinced the dough into a ball.  I won't say I rolled it, because the consistency is so different from any dough I've dealt with before.  You may need to dust a lot of flour all over everything. 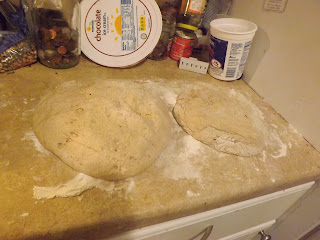 Cover the two globes with a towel and let them rest for 20 minutes.  By the end of that, they will have flattened a good bit.  Take one disk and flip it over.  Then you do the stretching and wrapping thing, which feels like swaddling a baby.  Pollan describes it like this: "Grab the edge of the dough farthest from you with all your fingers, stretch it away from you, and then fold it back over the top. Do the same to the edge of dough closest to you, and then to each of the sides. You have before you a rough rectangle of dough. Next take each of the corners in turn, stretching and folding over the dop. Now cup your hands around the package of dough and roll it away from you until you have a short, taut cylinder, with the seams on the bottom."  Does that make sense?  If not, I refer you again to YouTube.  You may need to dust with more flour between every fold, and dust the counter again before you roll the lump over. 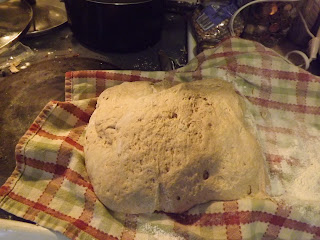 If you sifted the bran out at the beginning, you can roll the loaf in bran.  Then prepare your "banneton," which is supposed to be a special basket, but in my case is a bowl for each loaf.  You want to flour it pretty heavily, because if it sticks (mine stuck once) you end up with a very unsightly loaf.  Better still is to rub a towel with flour and line the bowl with that.  I had the best results when I did that.  Put the loaf in there seam-side-up.  And then do the same procedure -- stretching, folding, rolling in bran, putting in banneton -- with the other loaf.

Put both bowls into the refrigerator overnight -- or let rise another 2-3 hours and proceed with baking, if you still have enough day left.

Take the dough out of the fridge and leave out for 1 hour to return to room temperature.

Place the top and bottom of a Dutch oven on the center rack of the oven and preheat to 500. Take out the hot Dutch oven.  Try not to burn yourself on it, but who are we kidding?  Even in the instructional video I saw, the baker forgot and tried to grab the handle. 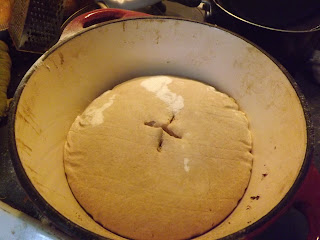 Overturn the bowl and dump the loaf into the pot. Score the top.  You're supposed to do it with a razor, but I don't have anything like that.  My knives all just tugged at the dough instead of cutting it.  The trick turned out to be using scissors.  I just snipped a cross with my kitchen shears.  You can score it in any pattern you like.

Put the lid on and put it into the oven, lowering the temp to 450.  Bake for 40-45 minutes, taking the lid off partway.  Pollan recommends taking it off after 20 minutes, but I don't like a very crunchy crust so I leave it on for half an hour.  When the time is up, if the loaf is golden brown, dump it out of the Dutch oven.  It's done if it sounds hollow on the bottom, they say.  Cool for a few hours.  If you're like me and don't like an extremely crunchy crust, wrap it in a towel while it's cooling. 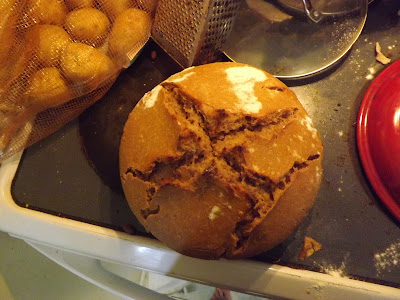 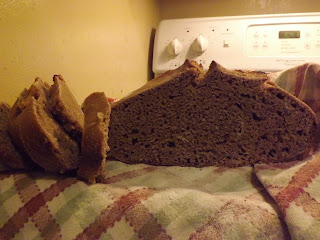 When it's fully cool, or at least down to warm, you can cut it up with a sharp serrated knife.  Other knives will just smash the bread or tear it up.  It's good with butter, jam, cream cheese, or as a grilled cheese sandwich.

My loaf never is very tall, but soft and tasty!  White flour will give you more rise than whole wheat, but whole wheat has more of a taste to it and, of course, is better for you. 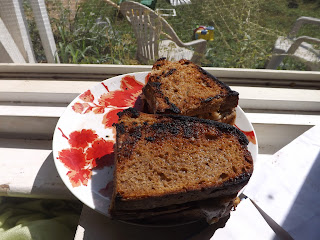 Kind of a project, but it's pretty tasty.  I just want to figure out now how to make the crust not so crunchy.  Is that unusual?  I find this style of bread always ends up with a very thick, chewy crust that quickly turns hard once I start to cut into the loaf.  Any tips?

ETA: Turns out I was baking it too long.  I didn't set a timer and was just guessing.  Now I set the timer for 38 minutes and it turns out perfect.  And, following Alaina's advice in the comments, I wrap it in plastic once it's cool, and the crust doesn't harden.  Thanks, Alaina!
Posted by Sheila at 1:26 PM

If you store it in an airtight container, the crust will get much softer. It also won't stale as quickly. Most people consider that a big trade-off and have a hard time deciding between the crunchy crust and the longer lifespan of the loaf.

The inside of my bread came out a little sticky. Do you ever have that problem?

Usually that means it needed a little more cooking.