Yeah, my birthday was last Friday.  I wanted to post about it on the day of, but the day of was way too stressful.

Michael's birthday present to me was being awake from 2:30-4:00 a.m.  And there I was thinking he'd grown out of the "randomly awake for an hour or more in the middle of the night" thing.  He crawls all over me, jumps on me, climbs around in his crib, tries to get down and roam the house, tries to wake up Daddy ... and I just pretend I'm asleep and/or pin him next to me with my arm in the hopes he will drift off.  Ugh.

Marko's gift to me was figuring out how to open John's filing box while I was g-chatting with a friend. I turned around and saw the floor completely strewn with papers ... papers I didn't know how to refile.  Sometimes I make the mistake of thinking that because Marko is three and has a general knowledge of what he is and isn't allowed to do, I can take my eyes off him.

John's gift to me will make this a much better blog.  He replaced my broken camera!  With an actual working one! 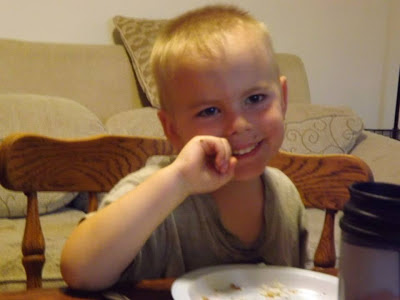 My mom sent me a box full of different things.  Here is the craziest gift: 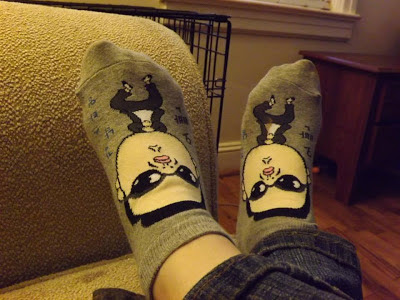 Yes, those are Gangnam Style socks.  Don't know what the Korean characters say.

The day after my birthday we planned to go to sheep farm to get some wool. But the farmers weren't available to show us around that day, so we'll have to try some other day.  So then we were going to see Star Trek: Into Darkness, but I couldn't get a sitter.  I spent a short time feeling sorry for myself that I wasn't going to do anything fun for my birthday .... when I noticed the sun had come out and decided we should go down to the river!  I got to go swimming for the first time all year.  I wanted to swim across -- the Shenandoah is not wide here and I've never crossed it before -- but because of the recent rain, it was deeper, wider, and faster than usual, so I opted not to.  I had fun all the same.  So did the kids.  Michael braved the water and let me swish him around.  Marko was emphatically not interested.  He just waded.

Twenty-seven is not a particularly interesting age.  But I have had a really good year.  Somehow I feel like an actual adult this year, more than last year.  Probably because I've formulated a lot more opinions and been willing to stand up for them.  In the past, my habit is to latch onto other people's opinions and tentatively believe them, but without being sure enough to actually claim them in public.

And hey, flying cross-country with two kids is no mean feat either.  Neither is writing a book.

I was feeling like thirty was right around the corner.  Then it occurred to me that when I turn thirty, Marko will be six and Michael will be four.

What would I like to happen before I'm twenty-eight?

Hm.  It would be nice if I finished the two nonfiction books I'm working on.  But I am not really buckling down to those yet.  Hopefully by the end of the year, though.  That's not a bad goal.


See more quick takes at Conversion Diary.
Posted by Sheila at 9:55 AM

Well, I apologise for forgetting AGAIN to wish you Many happy Returns...

But 27 is a very interesting number - it is three to the third power, which is for most of us the last such number we may attain. I recall being 27, as that was just about when Rubik's Cube was big, and I iced my birthday cake to look like one of the "impossible" positions. (yeah there are many impossible arrangements which can not be gained by normal twisting; you have to "open" the Cube...)

And I look forward to reading your books... (and to hearing your reactions when you reach - ah - Castel Gandolfo and other such places.)

At the risk of sounding corny, I think this is a great (late) birthday post because it looks at what you have now, how you've changed since last year, and where you'd like to be next year. =)

I'm a bit older than you are, but I only started feeling like an adult this year. It happened at work, when I realised that I really, really wanted to call in sick the next day because I was so exhausted, but knew that I couldn't because there were people depending on me to bring home a paycheck. =/ And come to think of it, I just passed my one year anniversary at work!

Happy birthday! My husband is turning 24 next week, and that seems OLD to me...like we're actual grown-ups rather than recent college grads.

Um, I should note that I don't actually think 27 is old. I have plenty of friends who are that age, and they don't seem old. It's just when it happens to people I've known since they were in high school that it weirds me out.

Er... 27 is three-to-the-third, and four-to-the-fourth is 256, not 64. Some biblical characters achieved that, and even larger values.

And I don't make the plans. God does.

Oh, I see. I was just cubing numbers.

Thanks for the kind wishes, everyone.

3 is also the number of the Trinity, so cubing it seems more special than cubing any other number