There's some stuff I do like.  But most of it would not be considered appropriate to wear.  I mean, I just love this: 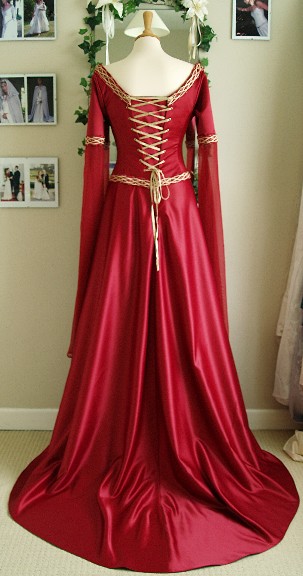 ...but it would draw more attention than I'm really comfortable with.

And I totally wish I were Indian so I could get away with wearing this: 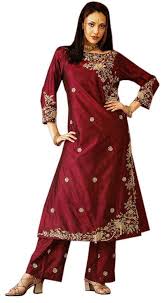 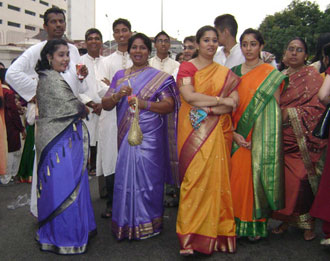 ... but sadly I don't look even a little bit Indian, so I think I would probably offend someone if I tried.

So, as far as things currently considered acceptable to wear ....

I love jeans.  Used to hate them, until I discovered words like "boot cut" and "low rise" would win me a pair that was actually comfortable.  Now I could live in them. 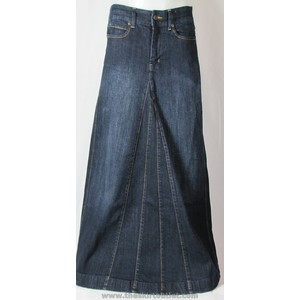 I have one of these, and another one in knee length.  (I don't like any length but ankle and knee.)  Embroidered details and patches are nice.

I love hippie and gypsy skirts. 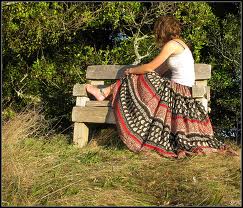 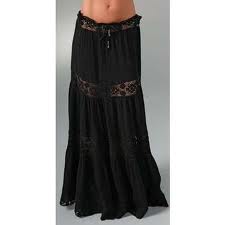 I don't wear them too often because my kids use them as handles and I hate being dragged around by my clothes.  But I love them.  I had a paisley hippie skirt that I wore almost every Sunday for EIGHT YEARS.  It literally wore right out.  So now it's a mei tai.  What?  I couldn't part with it.  I'll have to post a picture later.

Given the choice, I wear short sleeves.  Long sleeves make me claustrophobic.  I just push them up.  I had a thing for awhile for fuzzy sweaters, but those got too claustrophobic too, especially with kids hanging on me.

I think dip-dyeing is one of the prettiest things ever.  I have a dip-dyed coral shirt with a butterfly applique that I love ... but it's a little tight so I never wear it.  Sigh.  I dreamed and dreamed when I was in college of a yellow dip-dyed formal gown ... but when it came down to it I wore something completely different because apparently they don't have things like that in the stores.  Particularly not in the under $50 price range. 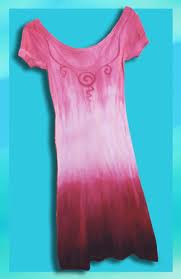 Oh, and I'm a Spring.  For the most part I love my colors.  Except I don't much care for pink, which if you look at the swatches I have to choose from is pretty unfortunate. 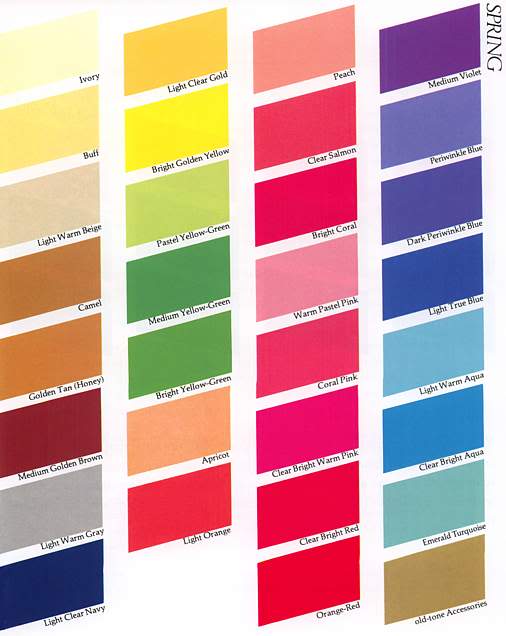 I just can't imagine a world in which I would wear fuchsia on purpose.  I do like all those blues and greens though.  Also red.  I can wear true red, and look good in it.

I like flannel shirts.  They are so soft.  Really, I like everything that's soft (NOT velvet though, because I do not call that soft).  I like to wear flannel shirts unbuttoned over a tank top.  That's actually what I'm wearing right now.

I like pashminas.  I have three really pretty ones ... but I never wear them except maybe for really formal events.  But they are wonderful.  If they are long enough, they make excellent baby slings.  They also can be nursing covers, mantillas, or shrugs.  Pretty much whatever you want.  And they are pretty. 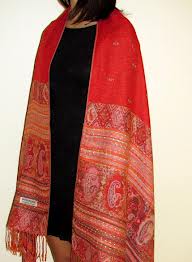 I am not much of an accessorizer.  I have jewelry, but I never wear anything but my watch and rings.  Which is a shame ... I used to wear this lovely Celtic pendant almost daily, but then Marko broke it, sniff.  I think I fixed it, but I hardly want to get it broken again.  Perhaps for some special occasion, someday.   I also have some bracelets and things.  Which I never wear.  It just seems silly to wear it around the house, but then if I ever go anywhere fancy, I'm totally distracted by my jewelry because I'm not used to it.

Oh, I don't have pierced ears.  I don't want them either.  I'm not really comfortable with holes in my body.  I do kind of like tattoos (depending, of course), but they're just kind of permanent and painful and I'd be scared to get one.

I am picky about shoes.  I don't like heels of any description; I teeter.  I have a pair for weddings which are pretty enough, but they are not at all comfortable.  And they're only an inch and a half! 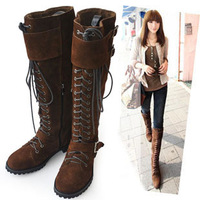 Aren't they a dream?

So that should clear some things up.  Now I can send people to this post when they ask me "what do you like?"  This is the stuff I like.
Posted by Sheila at 9:00 PM

Oh my GOSH, those boots are a dream. Every time I find awesome ones, though, they're so expensive! I'll have to keep looking...

I always think that if I lived in the world of some BBC period drama, I'd be so much more comfortable in my clothes than I am in the real one, with my real, never satisfactory clothes. Maybe that would be because someone else dressed me all the time.

But I do love a long skirt and boots. Or a long skirt and just about anything. And that dip-dyed shirt! Oh, my gosh! My 9-year-old and I did some tie-dyeing last summer, but now we have to dip-dye!

And pashminas are wonderful. I have a bunch of them hanging on our peg rack in the back hall so that I don't forget to wear them, though this usually translates into "so one daughter doesn't forget to play dress-ups with them, and the other daughter doesn't forget to borrow them for nights out." To the pashmina I would add the long beautiful scarf as an essential -- I have this silk velour dark-teal scarf that I bought marked way down at T.J. Maxx about ten years ago, and it's the staple of my winter wardrobe. No matter what I'm wearing, the teal scarf dresses it up.

These are great posts, by the way. I was always kind of an eccentric dresser, too, and definitely not a dresser-upper or makeup-wearer. Now that I'm almost 50, I appreciate how much I got away with just by being young. I keep trying not to let angst over how to *look* as a middle-aged person run my life, but it's hard (do I buck convention and keep wearing my hair really long, or does it really make me look like one of the Weird Sisters? Etc. I don't want to let how other people see me run my life, but on the other hand, I really don't want to look like one of the Weird Sisters . . . )

Shoes: boots in winter, Teva sandals in summer. Some form of flat Mary Jane for most dressier occasions. When we first lived in Cambridge, and we had to go to some black-tie affair at my husband's college, I went out to buy myself some suitable shoes. I tried on all these heels, which looked nice until it occurred to me that to get to this black-tie affair, I was going to be walking across town. Furthermore, to get to just about any destination where I was expected to look nice and dressed up on arrival, I was going to be walking. I ended up buying a pair of black Ecco Mary Janes, very funky looking with square toes, which I guess were what was cool at the time, and the most amazing arch support of any shoes I've ever worn. Those were my dress shoes for those four years, and I still have them -- greatest shoes ever. More comfortable than sneakers. I don't know why I even think of wearing anything else to dress up.

One more true confession, then I will stop flooding your combox: the best winter dress I have ever had was and is a dark-blue velour Motherwear nursing dress (vertical nursing openings, not a flap), which I bought in 1995, when my oldest daughter was about a year old. It's soft, warm, and really beautiful, though the cut isn't particularly fashionable any more. I wore it through all four children, and sometimes I still wear it, though the fact that it's a nursing dress and I haven't nursed in years and years does make it kind of a true-confession item. Friends say, "What a beautiful dress," and I can't stop myself from telling them, that really, it's a nursing dress, see? So, hours of amusement for all. But it is a seriously wonderful dress, and I've always wished I could find another, non-nursing dress that I liked half as much.

Heather: sadly if boots are nice, they are expensive. I have a "compromise" pair which is pretty nice and only moderately expensive. I just can't justify $100 or more for boots!

Sally: I forgot to mention how nursing affects what I can and can't wear! There's so much I can't wear and still nurse in, especially dresses. If I found a really good nursing dress, you can bet I would wear it to rags.

I say wear your hair long if you want to. My mom wore hers long for years after being told she was "too old" for long hair. It was lovely. And a coworker of mine had long white hair down to her waist! Who made up the "no-long-hair-past-forty" rule? When I am ninety I want to have long white hair in a bun. And I will wear outrageous clothes because I'll be too old for anyone to criticize them. (Probably they will think my medieval dresses are saved from my childhood, LOL.)

I saw a tutorial for dip-dyeing recently ... http://rixarixa.blogspot.com/2013/02/ombre-dyeing-tutorial-dip-dye.html Totally have to try that sometime.

The first one kind of reminded me of your wedding gown.

I can understand not wanting to be pulled around by your clothing by the boys, and I understand about long sleeves making me feel 'claustrophobic'. However, weird as it sounds, if I'm chilly, I put on a hoodie and make sure my wrists are covered. It seems in my 'old' age, as long as my wrists are warm, I am warm. Go figure!

You're right, it is like my wedding dress! That dress is the only thing I've ever worn that was absolutely perfect in every possible way. This is what you get when a friend makes it to your specifications. It was even comfortable!

For me it's my feet. If my feet are warm, I'm warm. If I'm too hot, I wash my feet in cold water. Works every time.

I was going to say that the red dress up top looks like MY wedding dress. (Which was custom-made by a friend.) Now I need to stalk your archives to see what your wedding dress looked like. Are there pictures in here?

You can see headless shots of my wedding dress here if you want to: http://clearingthesill.blogspot.com/2011/12/seven-quick-takes-with-wedding-pictures.html

Here is the only one: http://1.bp.blogspot.com/_bfjfB_aYFP0/SmZXCFiQ2iI/AAAAAAAAAQk/_9SuVqYiYIo/s1600-h/DSC_0365_edit.jpg I meant to post a different one as part of this post, but got lazy and didn't want to go through my 1,000 wedding pictures ... none of which are actually on this computer.

But it looks almost exactly like yours. Only no train.

Now that I look at the picture, I am pretty sure I used it to describe to my friend what kind of sleeves I wanted.

I am a really pitiful blog stalker.