I have had excellent yield from my tomato plants this year. At least the first part of the summer, I did. But something weird happened after the first flush of tomatoes. First, I was getting split tomatoes, so I harvested them green and ripened them indoors. Then the green tomatoes started to get brown spots and rot before they ever ripened. The vines slowly died, but they kept bearing rotten tomatoes. A nearby friend had the same issue: a large patch of what appeared to be dead tomato plants, endlessly bearing rotten tomatoes.

My first thought is some kind of deficiency. The tomato bed was unamended; it was lawn until this year. But then it might also be some kind of disease.

Anyway, when life gives you green tomatoes beginning to go brown, you can just sauce them. I did six pints, and am quite proud of my yield, even though I would have preferred red sauce.

What you do is saute an onion in some olive oil until translucent, then add your chopped green tomatoes. No need to peel them unless you want to. The tomatoes should release enough juice to slowly turn into sauce - you'll need to simmer for a few hours. Then add some garlic, cumin, jalapenos (or Tabasco), and plenty of salt. You can make it as spicy as you like; just keep tasting it. Cook awhile longer and blend or mush it up. You can pressure can it or just keep in the fridge. 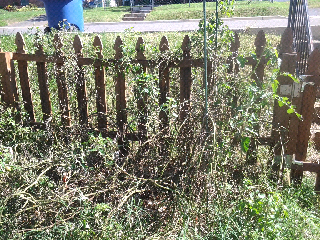 This could be the tomato blight, see this link:
http://www.gardenorganic.org.uk/factsheets/dc20.php

Good luck for next year!

I'm almost sure that's what it is, thanks!