My kids are annoying

There.  I said it.  From time to time, my kids really do drive me bananas.

I get praise all the time for how patient I am.  I don't mind waiting in line, and I waited for years for my husband to like me back.  But that's all small potatoes compared to the patience that small children demand. 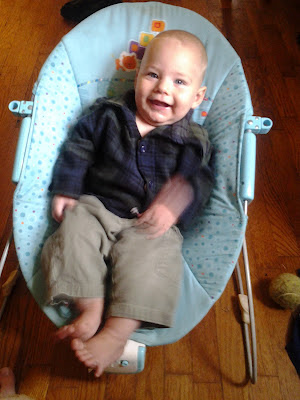 I am NEVER crabby.

Marko?  Well, naturally he is a force of destruction.  He's two.  High on ability, low on responsibility.  He can easily comprehend how to open the fridge, but he just doesn't seem to get it when I say "No, you may not play with the eggs."  I have yet to find a tone of voice between "doesn't even hear me" and "melts down into a puddle of misery on the floor because I yelled at him."  And whichever tone of voice I use, the WORDS I use seem to be utterly lost on him. 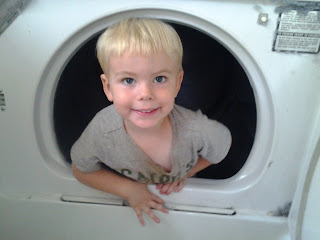 His special talents are scaling furniture, raiding the fridge, and dumping stuff.  If there is something to be dumped, you bet your britches he is dumping it.  Dog's water, cat's food, salt shaker, baking soda, clean laundry ... I have heard some people FOLD their clean diapers.  What madness is this?  He dumps our diaper basket a dozen times a day, and if you want me to fold it, well, you might as well just commit me to a mental institution now and save me the trouble.

And then there's that thing.  That thing that's a perfect storm between my two children.  The thing that ruins my day, except the part where it often happens several times a day.

The thing is this.  Michael is not a good napper, obviously.  He is related to me and therefore sleeps about as deeply as Argos.  But we've kind of got a routine going that works okay for him.  I nurse him in the rocking chair until he's asleep, then transfer him onto my bed.  There's a magical moment right after his eyes have shut when he can be moved; go too soon or too late and you lose.  I used to do the whole process in the bedroom, but that means leaving Marko unattended, which results in several kinds of disaster.  So here's what happens instead.

I sit down in the rocking chair in the living room with my yawning baby who is clearly at that exact perfect point when he will go to sleep with maximum ease.  I nurse him.  His eyes begin to droop.  He doesn't care at all about the general background noise of Marko running around and singing nonsense songs ... so Marko is careful not to do that.  No, he is perfectly silent, say, playing with the dog.  Michael's eyes drop to 98% shut.  And then Marko suddenly decides the dog is not playing the game right and lets out a massive, blood-curdling shriek.  Michael unlatches and his eyes go as wide as saucers.  Latch back on?  Ha.  He is ALL DONE.  And ALL AWAKE.  For about five minutes, Michael is as happy as a clam.  And then suddenly he realizes that he is now overtired and dissolves into whining and fussing and sobbing and clinging to me.

Half an hour later, he's finally willing to try again.  We nurse.  His eyes shut.  Stealthily I sneak out of the chair and into the bedroom.  Just as I reach the bed, the door bangs open.  "Play in the helicopter!" Marko announces, leaping onto the bed.  Michael still doesn't wake, so we're good.  But he is on the bed and bouncing so I can't lay him down.  So very, very softly I whisper, "Please move so I can lay the baby down."  Eyes fly open.  We lose.

Michael only ever naps 45 minutes at a time.  He would be willing to be lulled back to sleep for another round, if only I could get about 20 minutes of perfect silence and calm to do it.  In other words it never happens.  So he takes 3-4 naps a day.  Odds are good that at least one and probably several of my attempts to put him down to sleep will fail.  And then the poor child is sooooooo crabby.

Occasionally I try putting Marko in his room and shutting the door before beginning the process.  But then he howls like he's been committed to Alcatraz for life, and I feel terrible "punishing" him before he's actually done anything wrong.  I sometimes put him in there after he's woken up the baby, but then it's kind of pointless because the baby is already awake, and I honestly don't think he understands the concept of what I'm asking him to do.

It's just FRUSTRATING, you know?

But I have discovered one thing.  It's that my mood makes the difference between calmly whispering, "Please don't wake the baby" and screaming "YOU WOKE THE BABY AGAIN!  I CAN'T BELIEVE IT!  GET OUT OF HERE BEFORE I DO SOMETHING I'LL REGRET!"  The results of option A are superior to option B, and yet when I am angry, option B sounds more appealing.

The first is to IGNORE that stupid impulse I get when I am stressed out and behind on the chores ... you know, that still small voice that says, "The house is a mess.  Why don't you skip doing the chores and instead try making homemade pasta for the first time?"  I don't know why, but the more stressed out and behind I feel, the less I feel like doing chores and the more I feel like cooking something I've never cooked before, or maybe starting a complicated and messy crafting project.  My guess is this is the origin of Pinterest.  Just out of the margins of those pictures is a massive pile of scattered toys and half-eaten PBJ's.

The second thing is to change the scene.  I just pick them up and go: "Hey kids, Mama's gonna have an aneurysm if you destroy ONE MORE THING so we are going to go play outside."  It helps like you wouldn't believe.  For severe existential crises, the playground is indicated.

The third thing is the most important.  I simply cannot, canNOT do what I just did above.  I can't say "my kids are annoying."  Because if I give myself five minutes to think about it, I can think of a dozen more ways they drive me crazy.  (I had to stop myself from telling you about Juicemageddon of yesterday.)  And the more I think of them, the angrier I get until I'm speaking in furious monosyllables and getting in fights with the cat.  Yeah, not sure how that last one happened.

What I TRY to do (and often fail) is to pull the child who is bothering me closer, instead of pushing him away like I want to.  This of course has the effect of calming that kid down and stopping the avalanche of bad behavior that happens on a crabby day.  But more importantly, it helps me see the good in that child.  So I take Marko to the couch and I read him a book, and snuggle him, and the whole time I repeat to myself, "How much I love this child.  How big he is getting.  How hilarious his comments are.  I just can't get enough of him.  Soon he'll be growing up and he won't be this fun age anymore.  I know, I KNOW I will miss it."  Or I pick up Michael and coo at him, and sing, and tickle him, and rub his head.  His hair is about as long as a buzz cut now, only softer, and there is nothing in the world more fun than rubbing it backwards so it all stands up.  I could do it all day.

I am WORKING on it, anyway.  The past few days have been maddening and I feel like my brains are slowly leaking out my ears.

But John just walked in the door from his business trip, so I think things are going to be okay.  Nothing makes me see how great my children are like seeing them being held by Daddy ... i.e. happy and NOT being held by me.
Posted by Sheila at 1:25 PM

Michael is looking so handsome! =D

And I love Marko in the dryer. LOL! (Or is that the washing machine?)

I really hope this is just a bad week and that things get less crazy for you soon. =)

I very much relate to this post. :) Gave me a needed afternoon laugh!

I'm sorry to laugh at your pain, but this post is HILARIOUS.

You can come laugh at me in 4 or 5 years when the fates decide it's my turn to have a toddler who randomly shrieks just as the baby is falling asleep.

Sheila, I love you. I just love you. I could have written this entire post. Ha, including the part about waiting for years for you future husband to love you back. :-)

Love the picture of maniacal Marko in the dryer. And what is it with toddlers and dumping things? If only this talent could be harnessed...