The joys of routine 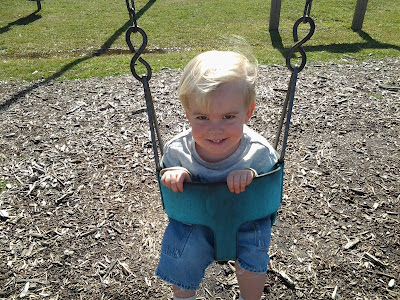 I keep hearing that routines are good for toddlers. That's probably true. But routines just don't come very naturally to me, so we haven't had any.

Well, that's not quite accurate. We have some getting-up and going-to-bed routines. In the morning, Marko gets up, I open the door to his room so he can come out, and then we sit on the couch, read a book, and eat a banana. This helps with the cranky transition from sleeping to being awake. Sometimes he's so chipper in the morning he doesn't want to bother with any of that stuff and goes straight to playing. Meanwhile getting his pajamas and wet diaper off, getting him to sit on the potty, and getting clean clothes on him has often been a battle.

Our night routine is down to a science and works very well. I credit it with the fact that we rarely have any trouble at bedtime. Marko will even ask for the next part of his routine. It goes like this: Daddy gets home at six. We eat dinner right away. After dinner, we dim the lights and put the dog in his kennel, but Marko can keep playing for awhile. But only as long as he's cheerful and chipper without much attention. Once he starts getting clingy or whiny or tantrumy, we start bedtime. First, some time on the potty. Then, a pathetic attempt at brushing his teeth. Then diapers and monkey jams. (Pajamas must have monkeys on them.) Then a book, usually his longest library book or else Babar. It is crucial that he have no toys in his hands for this part or bedtime is totally ruined. We keep reading until he starts getting snuggly and yawning. Then the book mysteriously gets shorter (I skip to near the end). Then I carry Marko into the bedroom -- again, if I let him walk, bedtime is ruined. We sit in the rocking chair and rock while I sing "O God Our Help In Ages Past" or "The Glory of These Forty Days." If I jump right into the song, there isn't usually any argument. But sometimes there is and we have to bargain over the song for awhile. The rocking and singing continues for ten minutes or so and then he passes out. I put him down exactly the same way every night, cover him with the same blanket, and tiptoe out.

These two routines really help with big transitions, and they also mean that either John or I can handle those times because we both do it the same exact way.

I've been trying lately to establish some more routines that can help the rest of our day move more smoothly. They might also help me to get more things done in a day!

The big one is "housework time." I established this at the beginning of Lent when I discovered how dang productive I am if I turn off the computer for one day. I have no desire to try to live without it every day, but I'm trying to make sure I am away from the computer first thing in the morning. I can check it over breakfast, but once I've eaten I have to minimize everything and walk away.

See, once Marko is up for the day and feeling pretty chipper, it's his easiest time of day. It's also my groggiest. So the easiest thing in the world is to wile away that time online while Marko entertains himself. But when I do that, that precious time is lost and I never seem to regain the momentum for the rest of the day. So now that time is housework time: one solid hour in which I don't use the computer or read. I am allowed to play with Marko, read to him, whatever he needs, but I can't waste the time on myself.

So far I've been using that time to do the dishes, clean the kitchen, and tidy the living room. It's also a great time to get laundry started. And Marko loves it. He likes following me from room to room and sometimes helping. Nothing thrills him like getting to sort the silverware or take one diaper at a time from the laundry basket and put it in the diaper basket. Sometimes he insists that housework time continue well past an hour. Sometimes, shockingly, I just keep going anyway. Momentum, you know. It's kind of addictive, getting things clean.

The advantages are really showing. I get a clean kitchen first thing in the morning, which makes me happy all day. I get some time to remember those little chores I tend to forget, like feeding the sourdough, filling up the dog's food container, gathering dirty clothes from around the house so I can start a load without forgetting anything, pulling out something to defrost for dinner, and so forth. Sometimes I use part of this time to bake.

(Side note: I have a baking addiction. I've been baking every day or two, and every single time the whole batch of whatever we've made is gone within 48 hours. This is a problem! I don't feel good eating that much baked goods, but they're ... well ... there. My midwife gave me a great tip: as soon as the rolls or biscuits or muffins are ready, take half of them and put them away in the freezer for after the baby's born. So now I have a half batch of carrot muffins and a half batch of English muffins in there, and I intend to keep adding to that stash ... saving me both a stuffed belly now, and a lot of trouble later.)

I've also fit "dressing Marko" into our routine, and he has been reliably wearing clothes every day this week. He went on an anti-clothes kick lately and would scream when we tried to dress him. I don't mind him running around naked, but it does mean I can't take any adorable pictures of what he's doing ... at least, not that I'm willing to post. At the same time he went on an anti-potty kick and would scream bloody murder if you suggested he use it. He'd be saying he needed to go, doing the potty dance, but the second the potty came in sight, EPIC MELTDOWN. And then he would pee all over my lap five minutes later. After one day in which he peed on me FOUR times (four pee puddles on the floor is not a big deal to me. Five complete outfit changes IS), I figured I would try putting him in pants again. Worse came to worst, he'd go through a lot of pants.

He did, but he loves wearing pants (it's the shirts that were freaking him out) and was willing to change them as often as necessary. For a few days, he came up to me all the time and announced, "No pee in your pants!" (meaning he just had) or "Your pants are wet, let me change them." (Yes, he talks as if he were me. Pronouns are hard, man.) And then ... he seemed to get it a lot better. He's been much more willing to sit on the potty when it's time (mostly still at my direction) and much better about not going in his pants. Which is nice because he only has about six pairs of pants and it's a shame to use them up in one morning. So we'll see.

The result on our routine is that after the banana and perhaps some playtime and some more breakfast comes "time to take off your monkey jams and put on clothes!" And he's been fairly cooperative. He still hates getting the pajamas off (which is weird because he also hates getting them on). But once they're off he's very excited about wearing actual clothes. I get dressed at this time too (no more whole days in pajamas for me!). It's all fitting together into a nice "get ready for the day" time. I know that after two years of being a parent, it's kind of late for me to figure this out. But it sure is handy.

The rest of the day is still pretty much routine-free. We don't even eat lunch at anything like a regular time -- sometimes we have one lunch at ten and another at two, and sometimes just one lunch at noon. And I could set a clock by Marko's 3:30 p.m. tantrum. Which is kind of why I think I could use some more routines. Planning a snack at that time doesn't help, but making it a quiet book-reading time seems to. So perhaps we should schedule a snack at three, then reading books for an hour or so. It might help.

I imagine that when Marko is older and I have more kids, having a set housework time every day will be really handy. First, everyone can participate, so that the big kids get in the habit of getting their chores done first thing in the morning and the little kids get to practice cleaning. Second, I'm sure I'll have more to do, so it will help me get a good running start to the day.

Right now I feel like a domestic GODDESS and the most ultra-efficient mother ever. Probably for doing something every other mother figured out four weeks postpartum with their first child. But hey. It's something, right?

Do you have any routines that save your life?
Posted by Sheila at 10:17 AM

Peter was having an 11AM meltdown for awhile, then I started aggressively offering food around 10:30. (If I just asked, he'd always say no, so I started getting the food out and repeatedly offering it.) This helped a lot. I'm wondering if maybe his blood sugar was just dropping a bit then? Hope the snack and reading books works for you!

Snacks help a lot. I would have thought a toddler would know when he's hungry -- after all, babies usually do, right? -- but mine just gets so busy he turns down all food unless you actually put it right into his hand.

The three p.m. meltdown is mainly caused by tiredness. He always wants to nap then, which I can't let him do because it's too close to bedtime. But most days he won't nap any sooner, either. He's just in a frustrating place between taking a nap and not taking one, and we still go back and forth between the two. Knowing why doesn't solve the problem, but it does help me get less frustrated. And some quiet, relaxed time can help him "reset" the way a nap does, to some extent.