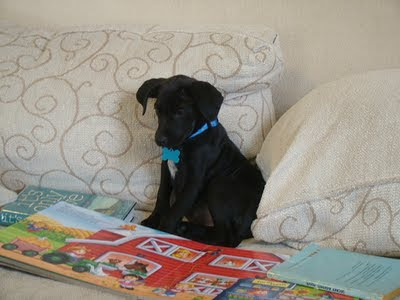 John has been dreaming of getting a dog since we got married. In the past, it's been impractical, as we lived in apartments. But now we have a house with a yard, so we've had our eyes out for a puppy for a long time.

It's a puppy, specifically, that he wanted, not an adult dog. He wanted a puppy he could train and teach tricks to. He's been researching dog training and scanning Craigslist, hoping for a chance to get a puppy.

And here we are. Saturday, we finally found a puppy that could be ours. He's a black Lab, at least mostly, and nine weeks old. He's pretty mellow for a puppy, but he still does like to play. We've named him Gilbert, after G.K. Chesterton. Marko is in love. If you calculate Gil's age in dog years, they're both toddlers. They are both rambunctious, destructive, and demanding. What we were thinking? On the bright side, the puppy is potty trained. I only wish I could say so much for Marko.

The lady we got the dog from explained that we have to watch the puppy to know when he needs to go out. Sounds like elimination communication to me! She said that puppies walk funny when they have to go. Only problem is, he's a puppy. He always walks funny. So I let him out every couple of hours, and he has only ever had one accident.

The only issue with this is that every time the puppy goes out, the baby wants to go too. And neither ever wants to come back in. So we have been spending a lot of time in the yard. They have a lot of fun, and don't get bored, but occasionally they get a little too interested in my green beans or try to get out the gate (the toddler can open it while the puppy makes a run for it!), so I have to drag them in. Generally that means carrying both of them, since neither comes when he's called if it means coming inside. Marko gets pretty grabby with his puppy friend. At first I drove myself crazy trying to get him to leave the dog alone, but John reminded me that puppies play rough with each other, too, and that he doesn't seem to mind. So I just keep a close eye to keep Marko from, say, sitting on him.

The first night, the puppy slept great in the kitchen. The second night, he whined quite a bit at being shut up by himself. I was very tempted to bring him into our bed (hey, cosleeping solves a lot of problems!) but John said he would soon get used to the kitchen. And he did settle down with a chew toy and a blanket pretty quickly.

The only issue is that he gets up with John in the morning, at five, and then goes out. Which means he does not at all want to go back in the kitchen for another two hours while he waits for Marko and me to get up. This morning, when he started up his whining, I just got him and brought him into bed with me. By the time I got out of bed, I had the puppy, the kitty, and the baby, all in that bed. But I got to sleep till seven, so I'm not complaining.

I'm not going to lie: it is taking some adjustment and some extra effort from me to take care of this dog. But he's already providing some excitement to our life (or at least to Marko's life: the rest of us were plenty excited already), and once he's a little older, it will be easier and more fun. 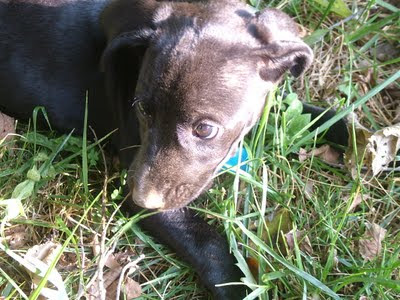 I'm squealing. I can hardly breathe he's so cute.

I had to get up after reading this to go and pet my three-year-old black Lab… named Newman!