I've never had the fruit called plantain. The plantain I have had is called broadleaf plantain, and it grows all over my yard. Since it grows easily in compacted soil, it's been wonderful for helping heal all the bare patches in my yard. Technically it's a weed, but I like having it mixed in with the grass.

It has tons of medicinal uses. Its seeds, called psyllium, are the main ingredient in Metamucil. It's supposed to be good for colds, bug bites, poison ivy, and even obesity and tumors! I didn't care particularly about that ... I just didn't want to open a can of spinach.

So I went out to pick some plantain. It's best to pick the tiny, young leaves in the center of the plant rather than the tough outer ones. (The outer ones serve as a good outdoor paper towel -- useful for smashing gross bugs or picking up stuff you don't want to touch. But they're too tough to eat.) It takes a lot for a serving -- a cup, loosely packed, is about right.

Then I rinsed the leaves in a bowl of water, pulling them up out of the water so the dirt settled down to the bottom. I chopped them up small, added some clean water, and put them on the stove to boil for about ten minutes ... plantains are tough so they need a lot of cooking.

Once they had changed color and looked done (by which time the house had taken on an odd smell, kind of like browned butter), I drained them and left them in my bowl while I made a white sauce: 1 tablespoon butter, 1 tablespoon flour, and half a cup of milk. When the sauce reached a simmer and was thickening, I put the plantains back in for a few minutes. Then I seasoned the whole lot with salt, pepper, and garlic powder, and chowed down! 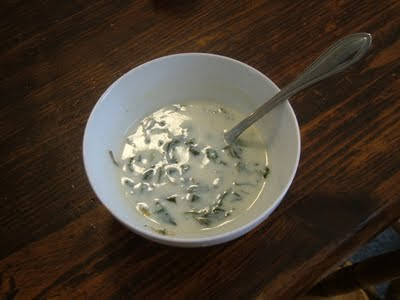 For something that's supposed to be a weed, it was quite delicious! Not bitter at all, like dandelions are; just a little chewy and spinachy-tasting. Certainly worth the brief time it took to pick and prepare them. I love making food for free.
Posted by Sheila at 11:56 AM

Love this idea! How did you figure out the weed was a plaintain, and that it's edible?

Oh, some article I read about the most common edible weeds. The others were dandelion, purslane, and ... oh, I forgot, but I didn't have the last one. Try a search for "edible weeds" and see what you find!