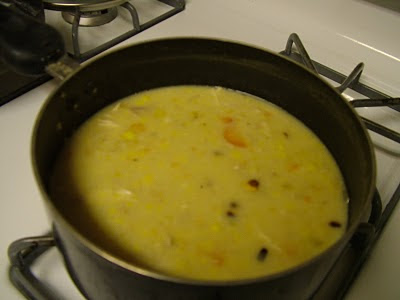 This is inspired by a post I read on Kitchen Stewardship about reverse-engineering favorite premade recipes. She suggests examining storebought foods that you eat and trying to see how you can make it yourself, more cheaply and healthfully than the original.

I decided to try to make chicken corn chowder. I was buying it at Aldi, canned, for $1.39. That is an awful lot for one lunch. At the same time, my grandma was reminding me that I shouldn't eat much canned soup because it is high in sodium.

So I forced myself to read the label -- something I don't usually do, because I know I won't like what I see. Sure enough, it was full of chemical ingredients that didn't sound like they could possibly be good for me. But there was also good news: the main ingredients were all cheap and easy to come by. I figured it would be pretty easy to reconstruct -- and it was.

4 potatoes
1 qt. chicken stock
half an onion
one carrot
one bag of frozen corn
half cup of milk
1 T butter
1 T flour
Shredded chicken: 1/2 to 1 cup

I cooked the first five ingredients till the potatoes and carrots were soft. In went my handy-dandy Christmas immersion blender. I made a bechamel sauce (white sauce) with the last three ingredients and used it to thicken the soup a bit. You could just as well use cream for this, but I never have any. Sour cream or plain yogurt might also go well with it. For extra flavor, I saved out about a quarter cup of corn, roasted it in the oven at 450 degrees, and added it at the very end. However, I set off the fire alarm doing it, so be careful. It only takes about five minutes. Another flavor kick would be added by crumbling in a little bit of bacon. It was in the canned soup, but it's another thing I never have, and it wasn't really missed.

Once the soup is made, you'll just have to season it according to your individual taste. I added only garlic and salt.

The best part? My estimated price per serving is about 60 cents. I cut the price of the canned soup in HALF! As to whether it tasted better -- I don't think so, but it was pretty equal. I think it would have been better with even more corn, but I only had the one bag. And if I had had bacon and cream, it probably would have tasted a little closer to the original.

A thought--using powdered milk in soups is cheaper than regular milk, but usually not to the detriment of the food's flavor.

Sounds icky (that's certainly what I told my mom the first time) but, when tried, you can't tell the difference.

I have heard that. Most of the time, though, I've found I can leave the milk out with little loss if I don't have any.

Update: I had some of the canned again, because we had it in the cupboard. Totally not as good as I remembered it. I'm going to vote my soup as better after all.