Sorry for the long gap in posts ... my computer was in the shop. Right around Christmas, it had a sudden wig-out moment, where the screen went on the fritz and then blanked, and then it wouldn't start up at all. I ended up taking it to the computer store, where they told me they had no idea what was wrong and no idea how much it would cost to fix, but that they would send it away for repair. After three weeks or so, they finally called me back, saying they had discovered it was the motherboard, and it would cost me an arm and a leg to repair. But a new laptop was slightly more expensive, and it had been a long time since I'd backed up any files. So I reluctantly coughed up the cash, and now the dear thing is mine again. I have given it a stern warning that it can't expect to have that amount of money spent on it again. And so I am back with you.

Christmas was quite nice. I was afraid of being homesick since I had wanted to go home and couldn't make it. It was also John's first Christmas away from home. But it was actually wonderfully peaceful. I had forgotten that these days, all it takes is us both having the day off to make it an extremely special day. That kind of day doesn't come often! And both of our families felt very present. We both got nice conversations on the phone with our families, and they were also both very generous with their sweet and thoughtful gifts. I don't know if I have ever gotten so many wonderful presents. We even have a crib for the baby now! 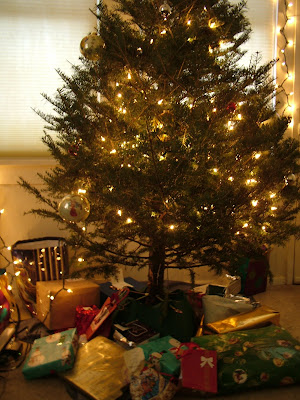 Over my Christmas break, I went down to Georgia for the Wedding of the Century, that is to say, the wedding of our dear friends Dave and Stephanie. John has been friends with Dave since the very beginning of our college career, and (after a brief rivalry over who would be John's best friend) I ended up making friends with him too. For the first year and a half or so, the three of us were pretty much inseparable. Then somehow something started showing up between John and me, and Dave inevitably began to feel left out. He began to bemoan his lack of girlfriend. Unbeknownst to him, Stephanie, a friend of mine, had already set her heart on him. This situation continued for a long, long time, until sometime in Rome he seemed to wake up and notice the attractive young lady making eyes and historical references at him. The rest, as they say, is history.

Appropriately, too, because I have never seen two bigger history buffs in all my born days. Their point of commonality is in Spain ... Charles V, Isabella, Ferdinand, all send their pulses racing just as I am dozing off. Therefore their wedding date coincided with some important Spanish victory over the Moors. Now, John didn't actually have any time off for it, but he managed to arrange his "weekend" and the day off for New Year's, and we drove down with some friends. The drive, in total, was about 15 hours, close to five times as long as I have ever been in a car before. It was half awesome road trip, and half utter exhaustion. I did very little of the driving, but it was still tiring.

Georgia was nicer than I had been led to believe. I had thought it would be dry and dusty, for some reason. I expected a few cotton plantations or something. Instead it was covered in pine forest and rustic charm. (Note that I consider shacks of rotting wood standing by the side of the road, "rustic charm." I happen to like the South.) Then we discovered something truly amazing and wonderful about Georgia, viz., Waffle House. Why had we not seen one of these before? While we were down there, we went to Waffle House something like three times. It's the kind of place where you can have grits and biscuits and gravy and eggs, all for under five dollars. Smiles and friendly banter from short-order cooks come free of charge. I ate ... so ... much. Not only did I pack in the various Southern breakfasty things I'd ordered, but I also finished everything anyone else didn't want. I never wanted "Are you going to eat that?" to be my catchphrase, but, sadly, it became so. Baby was hungry, I guess! (Though, who am I kidding? I have always had this appetite.)
The wedding was just lovely. It was much lower-key than ours. I had thought ours was low-key, but there was a lot of energy and excitement to it even though the costs were low. Dave and Steph's was out-and-out mellow. The reception was pure mingling around -- no dramatic kisses, toasts full of advice, or crazy dancing. But it was very them. And they seemed to be having a good time. The bride was also absolutely gorgeous, I almost forgot to mention. She's normally quite a nice-looking girl, but this was like her normal beauty squared -- without looking like anyone but herself. (This is the number one wedding fashion mistake, I have decided: brides who look like somebody else on their wedding day. (The number two fashion mistake is looking like an exotic dancer, another one Steph avoided, being wise as well as attractive.) )

Then we returned to Philadelphia, where it has been work, work, work, all the time, ever since. I admit I am counting the days till my maternity leave starts. The exhaustion just keeps increasing, while it's getting harder and harder to get a good night's sleep. I don't expect either of these to get better after the baby's born, but at least I won't have to commute an hour and a half or more every day, and I will have only one child's needs to be responsible for.

However, I am still quite healthy. Even though the doctor said I gained too much weight in the past month. Wonder if it was the Waffle House. Still, I haven't gained all that much overall, so I'm not concerned. I got all my blood work done, and should hear back about it soon. Then I have to go in and get my Rhogam shot (to which I am NOT looking forward: I hate shots!). This is because I am Rh-negative, to keep me from making antibodies against the baby -- or actually future babies. I worry about this one, but all should still be fine. Thanks to modern medicine, a condition that would have doomed me to having at most one or two surviving children is now simply a matter of getting a couple shots. I will remember this if modern medicine drives me nuts at the birth.

And that's all the news I can think of for now. I'll just stick in a few pictures and wish you all well till next time. 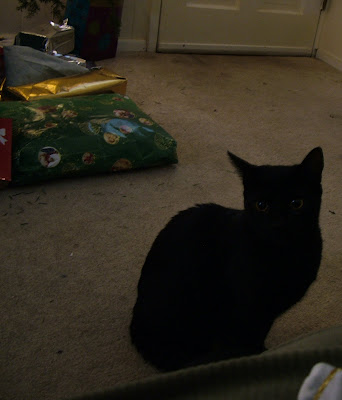 My Christmas present from John. He is not a cat lover (to put it mildly) and made this sacrifice for me. Her name is Pandora, but she goes by Kitty. She is a snuggle hog ... I have not yet seen her get tired of sitting on my lap and getting her ears scratched. She also gets heartbroken about being shut out of the bedroom at night. I like her, but -- it's hard enough to sleep without a cat lying on your face. 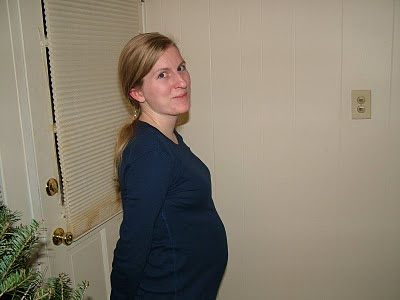 Me, a bit before Christmas. Of course, I know everyone just wants to see my gut. But I have to please my readers! It's a bit bigger now, but not by a ton. I feel huge, though.