I got a kitty!

Our basement kitty (officially named Pandora but always called Kitty-kitty) is still in the basement.  Every night she ventures out once the kids and dog are in bed for some snuggles with me, but the slightest noise and she whisks back down there to haunt the top shelves and stare down balefully.  It's safe to say she is a one-person cat.

But I've felt for years that what we really need is a cat that's for the kids.  Especially since we stopped keeping chickens.  So I've been keeping an eye out for the right cat.

The animal shelter sends a few cats to the pet store, to be on display there and maybe win over families, and that's where I spotted Clara.  She was a very pretty calico and I really, really wanted her.  But it took some time to get things together to adopt her, and by the time I got my application in at the humane society, somebody else had already asked for her.

It was sad, but I had come for a cat, so I asked to see all the others.  YOU GUYS.  There are some amazing cats down there.  They are a no-kill shelter so they have a whole lot of cats.  Some I was warned off of, as being stressed or hostile to kids or dogs or other cats.  But there were lots of friendly, mellow cats too.  The worker let them out one at a time for me to snuggle and the girls (who were with me) to interact with.

The cat that won me over had zero interest in the toys, but was enthusiastic about pets, even clumsy pets from Jackie.  She let me pick her up without a break in her purring.  I knew she was the cat chill enough for our family.  So I brought her home! 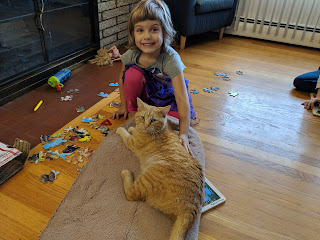 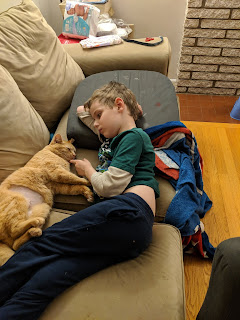 She's so chill and relaxed with the kids.  Just picks a place near them to lie around, and when they pet her, she purrs like a jet engine. 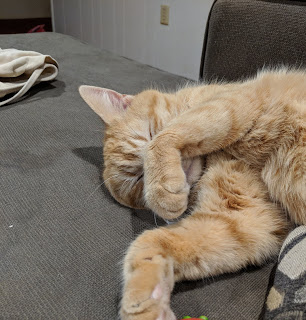 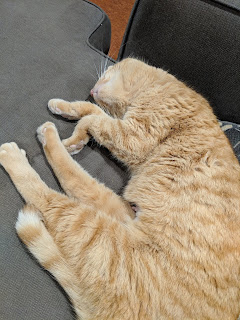 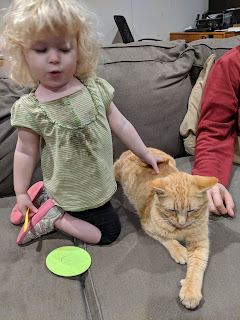 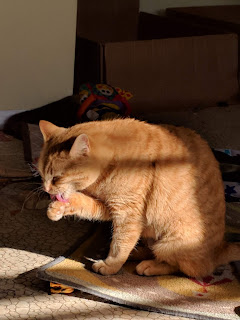 She's not meant to be "my" cat, but she's friendly with me also and loves to be picked up and snuggled. 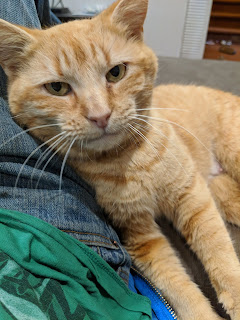 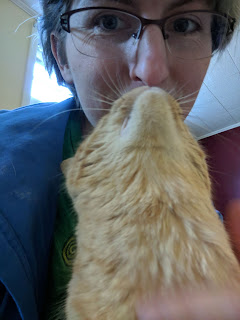 I meant to name her something Greek and obscure, because that's a thing I do.  But I couldn't find anything related to the sun or fire that was feminine and didn't sound terrible.  And she was reminding me of somebody from a long, long time ago....

You see, when I was four years old, all I wanted was a stuffed cat.  I had seen this orange one at the laundromat, and just longed for her without any hope of actually getting her.  We were having a really rough time that Christmas.  I think that's when my dad was unemployed.  My mom warned me I wasn't likely to get very much for Christmas.

But, of course, on Christmas morning, there she was!  An orange stripey stuffed cat, the exact right size and shape for hugging.  I named her Tiger and slept with her every night till I left for boarding school.  And . . . after I got back.  And for some of the time in college.  She was just very comfortable to hold, okay?

Anyway she was my best friend and I brought her everywhere.  I put sun lotion on her fur and it went all scruffy, and her whiskers all fell out at some point.  She was like the Velveteen Rabbit, the fur half loved off.

Our new cat looks just like her.  So we named her Tiger.  It seems to suit her.
Posted by Sheila at 11:49 AM

She's gorgeous! So happy you found a shelter cat who's cool with your kids. I've got an ex-feral who's okay with my husband and kid, but she lets it known that she is definitely My Cat.

The cat sounds perfect for your family!

But I'm afraid I'm still hung up on something you said first . . . Why did you stop keeping chickens?

Yeah, what happened to the chickens?