Today is the first day of the Orthodox fast, and I went shopping.  For the most part I bought my usual things, because I'm not sure yet how the kids will like the vegan stuff and because I'm probably going to keep breakfast, lunch, and snack for the kids exactly as before.  But I didn't buy any chicken, only one package of beef and a pound of sausage for dinner meat.  I spent the extra money on more vegetables, so I came out about even.  I am pretty sure if I went more hardcore on the vegan thing I would save money, but this time I spent $200, which is my usual budget.  That's for two weeks, for a family of six.  *polishes nails* Here's the entire haul.  I got two gallons of milk instead of three, three pounds of cheese instead of four, and only two pounds of butter.  Also two dozen eggs, one pint of sour cream, one quart of yogurt, a box of fish sticks, three pounds of baloney, and two packages of turkey.  That kind of sounds like a lot of animal foods, doesn't it?  I'm just really nervous about not having things on hand that people will eat.

On the flip side, I got fresh broccoli in addition to the usual frozen, both cabbage and celery (usually I pick one or the other), three avocados, an eggplant,  lots of carrots, bell peppers, cucumbers, lettuce, bagged salad, tomatoes, apples, mandarin oranges, and grapes.  Also restocked all my frozen vegetables and got lots of canned tomatoes, tomato sauce, chickpeas, and beans.  A big bag of dry black beans was 2.49, much cheaper than canned and I've already cooked them up. 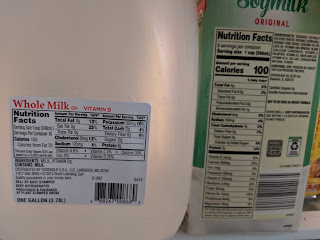 One of my extra purchases was soy milk.  I've bought almond milk before, but found it disappointingly watery, and it has only 60 calories per cup.  One of the main reasons I add milk to things is to pump up the calories, so I was happy to see soy milk has 100, and a similar macronutrient balance to milk.  We'll see how the kids like it, or whether they notice if I use it in cream soups and sauces.

I also got sunflower seeds, because I love them on salad.  Meant to get some other nuts too but forgot.  I got the one variety of canned soup Aldi sells that is vegan -- minestrone, at 1.35 a can.  For a snack for John I got potato chips.

Beyond that, I got all my usual things: 7 loaves of bread, 3 packages of tortillas, refried beans, crackers, animal crackers, pretzels, cereal, raisins, noodles, popsicles, and ice cream.

Breakfasts: I always have bran cereal with raisins and milk.  It messes up my entire day to have anything else.
Marko likes a baloney sandwich with Frank's Red Hot sauce on it.
Michael likes cereal and milk or else oatmeal (which I forgot to buy, oh dear).
Miriam and Jackie vary.  Sandwiches or toast are popular.  Too often, I can't get Jackie to eat any breakfast at all.
John usually does not eat breakfast.

I make one snack each day for everyone.  Favorites include muffins, scones, or rolls, all of which can be made vegan with soy milk and flaxseed in place of eggs.  Or sometimes I make hummus or black bean dip and give them carrots, celery, cucumber slices, and crackers.  If I'm phoning it in, they make themselves sandwiches and grab apples.

Monday (today): black bean tacos, with corn and bell pepper relish.  Everybody loved them.  Michael complained at first that they didn't have meat like usual, but then declared them "surprisingly good."  Miriam was happy to hear we were not eating any animals.  She believes eating animals is bad, but on the other hand "they are so delicious!"

Tuesday: Fish sticks, roast potatoes, and salad.  John can have the potatoes and salad, and make himself something in addition if he is still hungry.

Wednesday: Hummus sandwiches or wraps.  If I've got my stuff together, I'll make pitas.  Cucumbers and tomatoes will go well in there.

Thursday: Mac 'n' cheese.  I forgot until then that the Orthodox ease into Lent, and cheese is okay the first week.  Didn't want to miss the chance.

Friday: John was working late and missed dinner.  I made beef kofta.

Sunday:   Probably pasta.  I'm torn because I want to put in mushrooms and eggplant, but Marko hates mushrooms intensely.  If they're large enough to pick out, he'll pick them out, and if they're tiny enough he might not notice them at all.  But if he does notice them, and they're too small to pick out, that's when I'm in trouble.

Wednesday: falafel in wraps or pitas.  Vegan mayo is the only dressing I can think of to put on it, plus lots of cucumbers of course.  (Link is to Serious Eats, which I love.  JKLA's philosophy on vegan eating matches mine exactly: no fake meat, bring on the umami and variety.)

Friday: Corn chowder.  We haven't had that in awhile.  I think by adding some  hickory seasoning I should keep anybody from missing bacon.  Though honestly I never made it with bacon in the first place, because I never have it on hand.  The only thing I'll miss is sour cream.  But I have found potato chowders get quite a lift from a little smidge of apple cider vinegar.  You just need something sour to cut the heaviness.

Saturday: another meat meal.  I'm thinking meatloaf, mashed potatoes, and veg.  That way John can eat the potatoes and veg.

Sunday:  cabbage chili, without the meat.


Hopefully it will go well and people will eat the food!  It's taken me five days to write this post, hence the shifting tenses.  So far I've noticed that, while I planned to make meat meals twice a week, I don't want to make meat that often.  If I have a vegan recipe ready to go I'd really just as soon make that, because defrosting meat and dealing with it is an extra step.

Keep the recipe suggestions coming!
Posted by Sheila at 9:23 PM

Lentil pot pie:
Cook up some lentils and barley according to the package directions. (You can do them in the same pot.) In another pan, cook some onions and add celery and carrots. Pour in vegetable broth to cover (I used Better Than Bouillon) and cook till the vegetables are soft. Then season with thyme, rosemary, sage, garlic, salt, and pepper. Add some cornstarch slurry (kind of a lot) and bring it to a boil. Let that cool while you make the crust. I just used regular pie crust. Put it altogether and bake at 350 for half an hour. Make sure you cool it for at least half an hour before cutting in it so it firms up.

Sorry about the lack of amounts! I never know amounts, but it doesn't really matter, you can just do it to your taste. It does take a long time. You want to get started nice and early.

The cabbage chili is just an onion, half a cabbage, a potato, a big can of pinto beans, half a cup of water, little can of tomato sauce, and can of diced tomatoes. Cook that for twenty minutes or so, add garlic, salt, and chili powder. I usually make it with beef also, but it doesn't really need it. If you're not vegan, you'll want sour cream on top.

Thank you! Love the cabbage chili - that may be good for Friday night!