Going from one to many

So, frequent commenter Sojourner is going to have her second child any time now, and it seems a good moment to write a bit about what it's like to go from having one kid to having more than one.  Some people say it's incredibly hard, others that it's actually easier to have several kids than just one.  In a way, it's both.  It's easier in some ways and harder in others.  But one thing is for sure -- it changes the whole dynamic, a lot more than adding more kids later does. 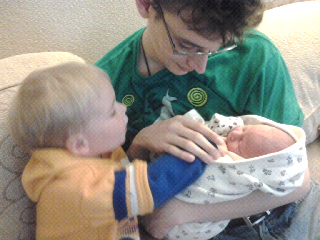 1.  It makes you less invested.
As an empathetic person, when I had just Marko, I found myself completely emotionally entangled with everything he felt.  He was having a bad day -- I was having a bad day.  He was happy -- I was a success as a parent.  We were super close, and it was kind of sad to lose that closeness when Michael was born.  But on the other hand, sooner or later I would have had to become less entangled, because it certainly isn't healthy for a mother to be that emotionally reliant on her child long-term.

When I had Michael, the emotional flood coming from Marko was diluted and I didn't automatically get carried away with it.  I was able to distinguish between one or the other of them having a hard time and everything being terrible.  And when one child had a tough day or a tough stage, I was a lot less tempted to think I was a failure as a parent because I would have another kid still doing fine.

2.  You get way more overstimulated.
Again, it's partly a me-specific thing -- I'm very sensitive to noise and touching as it is.  But when I had only Marko, I wasn't often "touched out."  He wasn't very high-needs and there was lots of time in the day when nobody was touching me or making any noise.  Multiply the kids and you increase the stimulation by a lot.  I started having to plan for it, which sometimes meant putting myself and Michael in a different room from Marko so I could nurse without Marko also trying to touch me or talk to me.  It was hard -- I felt like a bad mother for not being able to snuggle every child at the moment they wanted to.  But it does get better, because kids slowly reduce their need for touching.  Michael is happy with one big squeeze every once in awhile, and Marko is finally learning that he can ask for a hug instead of just coming over and leaning on me till I tip over.  Miriam's the only one who's very physically needy -- well, her and her baby brother or sister, because babies in utero somehow sap my tolerance for overstimulation just as much as they do on the outside.

3.  Eventually, they play together.
I thought I would have to wait at least a year before my kids would play together, but nope -- Marko came up with games Michael could play from when he was a few weeks old.  He would pull a chair over behind Michael's bouncer and "play bus," or he'd show his toys to Michael.  It was super adorable and it's only gotten better.  I basically don't play with them anymore because they entertain each other -- I'm for providing food and snuggles, not games, and that suits me fine because playing kid games isn't my bag.  They do fight, but on the other hand, I do feel they've developed a ton of social skills by playing with each other so much every day.  They know about bargaining with each other to find a game they both like, about negotiating for a desired toy, and how people play with you more if you're nice.  And their verbal skills surely have been helped by having hours a day of talking with each other -- and that means they don't have to be exclusively talking to me all day.  (Though don't get me wrong, they do talk to me a lot.  Sometimes at the same time.) 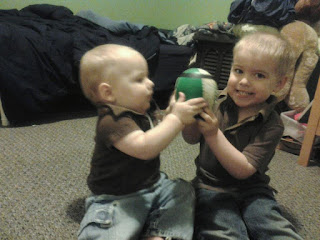 4.  Logistics can be hard.
Dealing with two awake kids in the middle of the night is a nightmare unless you have help.  I'm not going to gloss that one over.  And bedtime can involve a lot of juggling.  At this point I manage bedtime pretty easily with all three, even if John is out, but you may remember that for a long time this was my nemesis.  Details like getting shoes on everyone before leaving the house, or figuring out when to go home from the park when Miriam is bored and the other two want to stay forever, can be challenging.  With multiple kids, you are forced to plan more instead of drifting through the day like the free spirit I prefer to be.

5.  They eat SO MUCH.
It isn't just that I have to buy three times as much food.  It's that their appetites influence one another so somehow they are eating ALL THE TIME.  I mean, it goes something like this.

7 am - Miriam is starving, demands cereal.
7:15 - boys see her eating cereal, demand toast. Miriam sees their toast, rejects her cereal, and demands toast too.
7:30 - Marko finishes his toast and wanders off.  Michael has a sandwich.
7:45 - Miriam throws her toast on the floor and wants a sandwich.
8:00 - Marko wanders back into the kitchen and realizes Michael had a sandwich.  He now wants a sandwich.
8:15 - Marko is finished and leaves the kitchen.  I make tea for myself.
8:30 - Miriam sees I'm having tea and wants some.
8:45 - Michael sees Miriam drinking tea and wants milk.

This goes on ALL DAY.  I am not kidding.  I do better when I get a little ahead of them and make something nice that we can all eat and then all be finished, but invariably if there is only a little of something, they all want it, and if there is lots, two out of three kids don't like it and want something else.  When I'm cooking, I have no problem with slipping one kid a little bite, but I have to resist because it attracts the others .... and, like locusts, they leave nothing left.  In the past I've been a strong believer in letting kids' appetites direct what and when they eat, but you just can't do that with multiple kids if you want to ever not be making food.  More and more often I've been trotting out my mom's phrase -- "The kitchen is closed, no more food till noon/three/six."  And I'm sure it's not bad for them to have some structure to their food schedule.

6.  You get to enjoy just watching them.
It's really fun to watch kids interact.  They talk to each other, hug each other, play.  Marko is the bossy one, by virtue of being the oldest: he comes up with complicated games and tries to enlist the others, with mixed success.  Michael is the happy-go-lucky one -- happy to go along with Marko's plans at the outset, but rapidly getting bored and introducing non-canon wackiness.  And Miriam is the empathetic one -- cheerily handing toys to anyone who seems to really want them, hugging and kissing anyone who is sad.  One of the most hilarious parts is listening to them talk about the way they think the world is.  Without the interference of an adult to say, "Well, ACTUALLY the ocean is too large to build a bridge across," they come up with crazy versions of reality.  They'll learn the way things really are later -- in the meantime, they're hilarious to listen to. 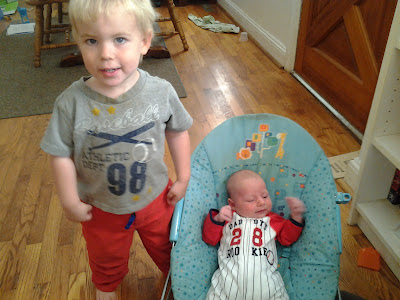 7.  Babywearing no longer solves everything.
Well, unless you're a lot more buff than I am.  I drew the line once their combined weight hit 40 lbs.

8.  You don't get breaks.
Even if you're lucky enough to have only kids who nap (ah, how blissful that must be!  I wouldn't know) what are the odds they will all nap at the same time?  You certainly are not getting a nap, not without the aid of the television at least.  (If you are anti-TV, the sooner you get over that, the better.  I'm not kidding.  It helps a whole lot when you have a toddler and a newborn, and you can always phase it out later.)  So you are on from wakeup to bedtime.  I have always managed, eventually, to coordinate their bedtimes within an hour or so.  I don't know if all kids are amenable to this, but I sure hope so because that off-duty time is necessary to my sanity.

9.  You will feel horribly guilty.
All mothers feel guilty, and more so if you have multiple kids.  Because there will be times when they both need you at the same time, and you'll have to choose one to take care of.  The other will cry and you will feel like a terrible person.  You will worry that you are picking favorites (and you are, but only till the next one needs to be your "favorite") and that one or both of your children are being neglected.  The fact that you care about this will probably help you not actually neglect them.  But it's hard, I'm not going to gloss that over.

10.  But sometimes, you'll feel like a star.
Those moments when everything comes together and you successfully schlep all the kids to the store and back without disaster -- you'll realize you are really, really good at what you do.  The meltdowns your youngest throws at you will not phase you, because you'll have seen these stages before and you know what to do -- and that they pass.  People will question you, like they did when you had one, and you can just say "oh, I have x many, I know what I'm doing."  It just doesn't get under your skin the way it did when you have one.  You work out ways to make your life easier and ways to manage things that, at first, you thought you couldn't possibly handle. 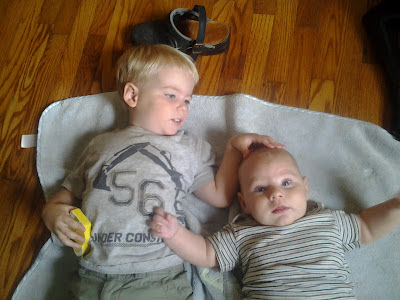 I am very glad I have more than one child.  Sometimes I wish I'd spaced them out more, but I have no regrets at all about going past one.  It really has enriched my life and theirs, despite the struggle of adjustment each time we've added one.  (And don't get me wrong, just because more than one is good, doesn't mean I want to have an unlimited number.  I haven't changed my mind about that.)

Good luck, Sojourner!  Hope your next child is as mellow as can be.
Posted by Sheila at 10:45 AM

7. Babywearing no longer solves everything.
Well, unless you're a lot more buff than I am. I drew the line once their combined weight hit 40 lbs.

I have a feeling that tandem wearing is really not going to be in the cards considering J already weighs 34 lbs and I really really don't think baby sister is going to weigh less than 6, especially since she seems determined to keep baking FOR-EV-ER. :p

On the plus side, it should be a *little* easier to chase J with a baby strapped to my chest v. with a baby bouncing up and down on top of my bladder.

Also will be much easier to push J in the stroller once I can breathe again.

Luckily Miriam gave up on liking babywearing almost a year ago. The downside being that she still sometimes REALLY wants to be carried, she just insists it must be in my arms.

J was pretty neutral on babywearing when we were last doing it--but *I* liked it because it guaranteed that I could make a quick trip into the post office or library or whatever without having to worry about him bolting while my hands were occupied.

Perhaps we should get him a kiddie leash after all. :p

A double or triple stroller helps a lot!

Nothing wrong with a kiddie leash. It's what Harambe would want you to do.