Alas, right after the beautiful, cool, clear weather that signals the start of fall in Virginia, we always get a wet spell.  That's okay, though, because it doesn't last -- it just clears the air for a lovely October, usually.

The cool, damp weather is reminding me of the Northwest.  I actually got up the nerve to take a walk the other day -- all three kids, plus the dog on his new no-pull harness.  (He still pulls, but less at least.  Sigh.)  It was really pleasant, if a bit misty out.  Our new neighborhood is fairly flat for some distance, with a lot of branching roads and interesting houses to look at.  Much better for walking than our old place, where there was one short route you could take unless you wanted to brave the steep hills, which I almost never did willingly.

I am really proud that I walked almost a whole mile.  My back has started to give some trouble already.  I can't figure out what sets it off; it isn't walking and it isn't carrying Miriam.  But if I spend a day doing housework it gets pretty screwed up.  I don't know if it's lifting things, vacuuming, bending over, or just too much standing, but it takes a couple days to recover.  Anyway, I figure light exercise can help, and I had the energy to do it for once.

Fall weather means fall food.  I am the last person in the world to diss pumpkin spice -- it's basically crack -- but let's not neglect the other delicious fall flavors: apple, cinnamon, winter squash, sweet potatoes, sage, sausage, celery, curry, chili.  Or am I the only one who craves these things in the fall?

My new thing with chicken is to butterfly it instead of roasting it whole.  It cooks in half the time, the skin is crispy all over instead of just on one side, and I really think it helps keep the breasts from drying out.  Up to now I've been putting it on a bed of lemons and fresh herbs from my new garden, which is always good.  But last time I put it on a bed of carrots, celery, and onions, and it was SO GOOD.  The vegetables cooked in the chicken juice, and those that stuck out from under it caramelized.  And there's just something about cooked celery with poultry that makes me think of Thanksgiving stuffing.  Heck, cooked celery in general is kind of magical.  Maybe I'll make cream of celery soup tomorrow.

Here are a couple recipes for you guys, because if you visit this blog for recipes you are the World's Most Persistent Readers and I love you for it:

Pumpkin Muffins
(my mom's recipe, for which she is justly famous)

375 degrees for 20 minutes. 10 minutes for miniature muffins.  They are best when you eat them hot -- you can split them open and put butter inside.

Brown the beef, with the onions and cabbage if you prefer, and drain out the grease.  Then combine all the ingredients and cook for about half an hour.  Season with garlic, salt, and chili powder.  Warms you up deep down.

Another thing I am doing lately is bread.  It's been at least a year since I inadvertently killed my last sourdough starter -- very sad, because it was a great starter that endured neglect very patiently and still gave me good results.  But I have started another one and after a lot of pancakes and English muffins, it's finally reached maturity and can do bread.

Artisan sourdough bread is not difficult, but it can be scary, because you can spend a day and a half working on it and get bad results sometimes.  The first one I made with this starter was a brick because it wasn't really mature enough, and the second was too wet and collapsed.  But the third one was the charm! 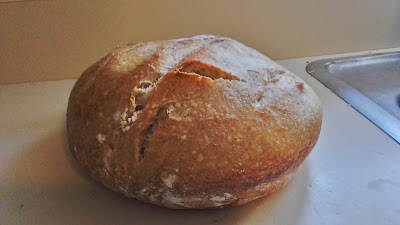 And it's just so delicious when it actually turns out ... that's what keeps me trying even at risk of disaster.

We had a little health scare with Miriam this week.  She had a little sore on her butt that looked like no big deal, but then a couple of days later it appeared to have grown.  (I don't look at her backside often since she's out of diapers.)  And then the next day it looked blistery around the edges.  I worried that it might be infected, so I put some peroxide on it, but that made her scream like a banshee.

Then the day after that, she had three cold sores on her face.  That started to freak me out.  But I heard heard that hand, foot and mouth disease was going around, and the facebook group I ask these questions in was very emphatic that that must be it, it doesn't always present with fever.  Okay, so I canceled any outings for the week and planned to settle in and wait for the rest of the kids to get it.

Only John really thought I should take her to the doctor to be sure, and later that evening I found out that HFM blisters are very small, whereas what Miriam had looked more like impetigo.  (Thank goodness for the internet and pictures of every nasty skin condition you can imagine.)  So I made the appointment and sure enough, that's what it is.  Impetigo is a staph infection on the skin which is both painful and really gross-looking.  It's very good we brought her in when we did, because without antibiotics it can continue to spread and get quite serious.

The doctor prescribed both oral and topical antibiotics.  Alas, my child's perfect untouched gut flora will probably never be the same.  The first time we gave her the meds, she spat at least half of pink liquid back out on John and me, and the ointment ended up almost everywhere.  But now, thanks to bribery (one mL of medicine, one sip of juice) and letting her do some of the ointment herself, she's pretty cooperative.  Apparently she is no longer contagious and the sores should start to heal in a few days.  But the meds have to be continued for a full ten ... oh joy. 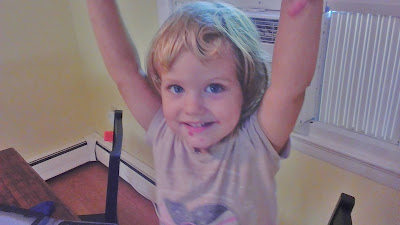 I'm hoping that as the sores heal, she'll start sleeping better.  Her sleep has been terrible lately, and that has resulted in me spending hours on the floor of her room, screwing up my back.

It appears the problem with Marko is that I was pushing on to new things too fast.  Unfortunately I have only a few super easy readers, and the easy readers at the library are much harder.  Marko can read those, but they are really hard and long for him.  If I have him read the really easy ones we have at home, he does much better, and gains confidence.  I need to look out for more like that, because the entire point of homeschooling is that everyone can go at their own pace.  If he's going to feel dumb because he's being asked to read things he isn't really ready for, he might as well be going to school!

I was going to let the kids watch the debate, because I remember being a kid and watching the debates in 1992 and it just seemed like one of those historical moments to let kids be a part of.  But I forgot that when I was a kid, we were in Pacific time and so we watched those over dinner, while apparently on this end of the country you're stuck watching them well after bedtime.  So I watched them alone.

It was fun, I guess.  Sometimes I got frustrated and turned it off for awhile because I couldn't deal with watching them just shout over each other.  Other times I laughed because Trump kept digging himself deeper and deeper holes.  Don't get me wrong, I think Clinton deserves credit for baiting him, but he made it very easy.  Paying no taxes is "smart"?  (Does that make him one of Romney's 47%?)  Failing to pay your contractors is "good business"?  Insulting women is okay if they "deserved it"?  The guy has basically no awareness of how these things look to people who are not his fanatical followers.

And part of it was just, I've been a woman debater.  I know how it is having guys shout over you or bluster with such confidence that they get believed even though they're making stuff up and you prepared for hours.  It made me feel good to see a woman on the stage doing just fine, even when I don't agree with a lot of her points.  (Between the two of them, I feel very scared for Syria.  Whichever one wins, they are likely to feed the conflict there, and it's not going to be pretty.)

How has your week been?
Posted by Sheila at 4:54 PM

I don't come here just for the recipes, as you can tell, but I definitely appreciate them when they come! (And not to be pushy or anything, but you did promise something like The World's Best Potato Salad some time ago . . .) I think I'll try the chili first. Do you serve it with a vegetable side dish and something carb-ish, or eat it on its own?

Poor Miriam! And her poor gut flora! I hope she gets better soon.

Nope, the chili is a whole dinner in itself.

Can't believe I forgot to share the potato salad! The trouble is, I keep tinkering with it and never make it the same way twice. I should at least write out a choose-your-own-adventure version.

Miriam is much better already. Instead of nasty open sores she has little pink patches that are healing. But you can imagine I will be ladling sauerkraut into her for the foreseeable future.

I have to add that you are absolutely right to say the chili "warms you up deep down"! Warmth isn't really a priority for me where I live, but I do go to work in an office where the air conditioning can get really uncomfortable. And tonight, after a bowl of the cabbage chili, I was the only one not freezing her socks off in the extra-cold meeting room! It was especially impressive since I'm usually the one who starts shivering first!

Yay, someone actually used my recipe!

I'm not a huge fan of beans, so it was nice to realize you can have chili without it. (A no-brainer, now that I think about it. Why didn't I substitute something for the beans before? But it had really never occurred to me!)

By the way, what do you do about all the oil from the beef? I bought lean ground beef and it still was so greasy that I had to wait until the portion I had put in the refrigerator got cold enough for me to scoop the excess oil out.