Why I wear pants

Yes, it's a hot-button issue for Catholic women, and I've never touched it before.  The skirts-only crowd and the sometimes-pants crowd go back and forth online all the time, and I usually keep out of it because I don't think clothes are that big of a deal.

There's some history behind this.  When I was about thirteen I decided I loved skirts.  I had this huge cream-colored skirt which I called my "confidence skirt" because I always felt so self-assured in it.  Probably because I didn't have to worry about where I put my feet, since no one could see them.  Or else because it was so vast I felt bigger than I was in real life (which, at the time, was about 90 pounds).  I wore pants often enough at home, but if I was going somewhere I usually wore a skirt.

Then at boarding school I wore skirts exclusively -- even at the beach or while playing basketball -- because it was a rule.  It was a really big deal for some people to wear only skirts, apparently.  It wasn't a big deal for me.  That is, until all my clothes were given to Goodwill and I was forced to buy new ones that better fit what a "Woman of the Kingdom" should look like.  My mom was furious because, on the one hand, she had liked my clothes and would have liked to keep them (many were handmedowns from her), and on the other, buying all new clothes for me was an expense my family didn't need.

I didn't care for the way I looked in the new clothes, particularly.  I liked big billowy skirts; I was put in tailored shortish skirts.  Skirts that required dress shoes instead of prairie boots.  I freely admit that I had no sense of style as a preteen.  But it was my style and I liked wearing clothes I had picked myself.

When I left boarding school, I kept wearing skirts exclusively for a full year.  After all, I was trying to get back there, and there was no way I was slacking off on the rules just because I wasn't there at the moment.  I found pants uncomfortable anyway.  They weren't always practical, but I stuck with them -- despite embarrassing moments like trying to fly my grandpa's airplane with the stick between my legs, so that my skirt was hiked right up my thighs; or the time I was bushwhacking through the greenbelt near our house and sunk into some mud almost up to the waist, meaning I had to drag myself home with a soggy, muddy skirt plastered to my legs.

But eventually -- I think for the sake of horseback riding -- I put on a pair of pants, my dad's old camo pants.  I stuck with those till I went to college; they were my only pair and I mostly wore them to mow the lawn.  When I went to college, I bought a pair of jeans and a pair of cargo pants, thinking that maybe I would wear them a bit more so as not to be quite so weird.

Only something happened to change that.  A few days into being at college, I had made a friend.  She was nice and very friendly, and had mentioned in passing that she only attended the Latin Mass.  (I learned later she was actually a sedevacantist.)  She seemed to single me out to be her friend, and I was quite flattered.  But after knowing her a few days, she let slip the reason: "It's nice to know someone else who doesn't wear pants."

I had been wearing skirts because I liked them.  I owned pants.  But I felt so tied in by her opinion.  Now that I was identified as an "only skirts" girl, I couldn't ever wear pants.  If I did, what if my friend didn't like me anymore?  In fact, I didn't wear them for a whole semester.  During finals week, I finally got up the guts to wear pants once.  No one even recognized me at first.  When they did, I got comment after comment on them.

That whole debacle was just frustrating to me.  Was I really so defined by what I wore?  I am not a person who cares about clothes.  Once I put them on, I would forget about them.  But apparently everyone else was keeping careful track.

Nowadays I wear pants more often than not.  They are eminently practical, I don't mind getting them dirty, they are easy to sit on the floor in.  I am not now, and have never been, all that ladylike.  I like to be feminine, but not upper-class.  I like to be able to move, dig in the garden, lie on the floor and do airplanes with the baby on my knees.  The most important thing lately is that shorts and skirts leave one very vulnerable to mosquitoes.  Skirt-wearers like to pride themselves on being able to do any activity in a skirt that you can do in pants ("except things that are unladylike anyway"), but they haven't been able to tell me any other way to keep bugs off without getting heatstroke.

I don't think pants are immodest.  Like any garment, it depends on the pants!  I guarantee you, my pants and skirts are both quite frumpy enough to satisfy anyone.  The advantage of pants is that they remain equally modest no matter what position you're in.  I heard of a girl who managed not to get raped because her attacker couldn't wrench off her skinny jeans.  Next best thing to a chastity belt!  Can't say that of a skirt.

Now I'm not anti-skirt.  I have several skirts that I love.  Most of them are enormous -- I like to be able to MOVE.  You won't see me in a pencil skirt, but I like hippie skirts and prairie skirts and circle skirts.  But I refuse to identify myself by my clothes.  I am to the point that I don't care how people will judge me: if they see me in pants, they might call me immodest; if they see me in a skirt, they might think I'm super-traditionalist; but I am darn well going to wear what is most comfortable and practical for me to wear.

And I refuse to let anyone else tell me what I should be wearing.  I don't exist to be looked at.  I like to look nice for my husband, which is why I grew my hair out even though I prefer it short, but no one besides my husband has any reason to stare at my lower half anyway.  I don't care if they find me too unfeminine; let them get to know me and they'll find I'm feminine enough.  (In a medieval-peasant sort of way.)  And I admit I wear pants more than I otherwise would just because I am aware of the pressure to wear skirts.  I don't like to be pushed around, and sometimes my pushing-back involves pants. 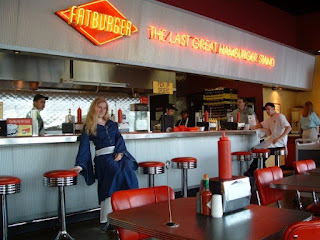 I wrote this post while wearing a skirt.  Just so you know.

If you are female, do you wear skirts, pants, or either?  If you are male, why the heck did you plow through a whole post about women's clothing?
Posted by Sheila at 10:06 PM

I love the topics you come up with - unexpected, but on the mark! I wear both - pants about 90% of the time, probably, because they're just more convenient and, in general, I have an easier time finding pants that I like and fit me well than skirts. But, I do like skirts too, and have a few that I wear when I can "afford" it (e.g. not worried that they're going to get in the way with toddler activities, slow me down or get completely ruined...) :)

By the way, we have FatBurger here in Northern Iraq too - funny how those chains get around!

I went through a "Pants are the devil!" phase when I was maybe 15 or 16. It wore off after a year or so, but by then I had gotten used to wearing skirts. I find them a lot more comfortable than pants and a lot more flattering to my personal body shape. (In other words, I am all about obscuring the butt/thigh area--let me emphasize: out of VANITY, not modesty.) I'm probably not fashionable at all either. I don't like short or "tight" skirts. Ruffled maxi skirts all the way!

I do own a couple pairs of pants and will wear them when I'm doing physical things like sledding or horseback riding (it's been way too long since I rode...) or whatever. I've never had problems with mosquitoes. In the winter I wear leggings under my skirts. (And some awesome boots.)

I have never had trouble dealing with toddlers while wearing skirts, but I guess I'll see how that pans out once I'm a full-time toddler wrangler. (God willing.)

I wear pants too. :) Overall, I do prefer them to skirts, and I find the argument that pants are less modest than skirts to be completely baffling. But I do like skirts and wear them sometimes, but 90% of the time I wear pants.

Well, I tend to wear WHAT I want WHEN I want, provided it covers enough to keep ME comfortable. I'm old now, and don't particularly CARE what others think of me anymore. And can't believe there are people who actually make a big deal out of this stuff. Really! My motto: If you don't like what you see here, Look Somewhere Else! I say wear what you want! :)

I vastly prefer skirts (and just bought two new ones last week), but I wear pants, too.

The other day, while I was chatting with a colleague at her desk, she said, "You look different. Why?"

I knew exactly why: "I'm not in a skirt today."

(My only problem with pants is writing the word. A friend who has moved to London told me that in the UK, "pants" are always underwear--and that she got an entire pub staring at her when she came in out of the rain and declared to her friend, "My pants are soaking!" In the UK, you say either "trousers" or "jeans." I'll have to ask her what the British English word for sweatpants are, as they are neither dressy enough to be trousers nor denim enough to be jeans.)

I think even sweatpants are called trousers. They don't think of trousers as something formal, just any old thing with two legs.

Definitely wouldn't want to announce that your pants are soaking in England, though. Yikes!

I'd say I'm about 50/50 right now. I was never in the "pants are the devil" camp though I did wear skirts exclusively for a few years. Now I'm in a "wear what's comfortable and flattering" phase. Whie I was carrying my fourth baby skirts were the absolute least comfortable thing in the world. Instead of a food aversion I had a skirts aversion. It was all I could do to wear a skirt to Mass! (that I will never compromise on). After I gave birth and was able to wear skirts again, I found I was just as happy in pants so I expanded my wardrobe.

So interesting. This is a hot-button topic among some evangelical/fundamentalist Protestant groups as well, though I never personally got pulled into it.

Good thing, since (a) I love jeans and (b) I can't take the inner thigh chafing and don't feel like wearing tights/hose all the time. Oh, the chafing! Anyone know a good solution to that? ;)

Hm, I never actually suffered from chafing as long as I wasn't wearing nylons. When I used to wear those, I had horrible horrible chafing from the crotch of my nylons, but without them I'm fine. So I couldn't tell ya! Maybe don't live in a humid climate, lol.