So, we made it back from our trip in one piece.  It was a ten-day trip -- from Sunday to Tuesday -- with just me and the two boys.  Let me tell you, though I'm glad I went, I hope never ever to travel without John again.  It was pretty tiring. 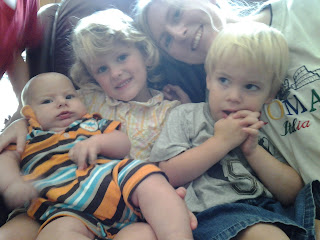 Marko was really scared in the airport, especially when the stroller went through the X-ray machine, but nothing bad happened.  The TSA even lets moms with babies go through a plain metal detector without taking the baby out of its carrier.  (They did test my hands for explosives afterward.)  But it was a huge relief that there were no attempts to pat down my toddler.  And once we got on the plane, all was well ... at any rate, Marko was excited and liked watching the baggage trucks and eating fishy crackers.  Entertaining both kids the whole flight was exhausting, but there wasn't much crying from either of them.  One thing though -- I would certainly recommend leaving more than two hours to spare to check in.  I'm not kidding.  Everything takes longer with kids and you're always having to pause to nurse and change diapers.  Being able to nurse in a wrap (so you don't lose your place in line) is invaluable.

When we finally arrived, after an hour to the airport, two hours in the airport, five hours on the plane, half an hour getting out of the airport, and 2 1/2 hours driving to my grandma's ... I was exhausted, but Marko was all chipper (having napped) and got along great with my siblings at first.  I was a little disconcerted because he ran off with them and didn't come back for some time!  But that hopeful beginning was deceptive ... after a few nights of getting very little sleep in an unfamiliar bed, he started getting shy, crabby, fragile, and clingy.  My parents would look at him or say good morning and he would dissolve into tears and come running for me.  It wasn't constant, but it was often. 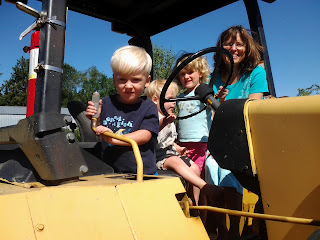 Michael was much more adaptable.  Three months is really a great age for traveling.  When he wasn't nursing or sleeping (and he could sleep anywhere), he was lying on the floor being loved on by his aunt and uncles.  They patted his belly, kissed him, tickled him, and never seemed to get bored with him.  Sometimes they would fight over him a little.  But other than that they were wonderful.  Michael was so happy and smiley the whole time, everyone was exclaiming what an "easy baby" he was.  Which I found hilarious considering what a needy baby he had been his first couple months.  And he did still nurse every hour or so.  But he was so happy all the time, I definitely had no complaints.  And with Marko demanding constant "up," it was nice that Michael wasn't asking for much from me. 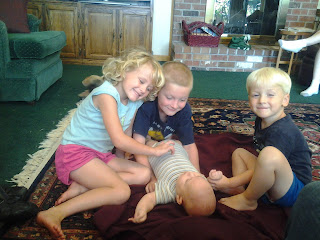 My six-year-old sister was just the sweetest little mother you can imagine.  She not only helped with Michael, she clicked pretty well with Marko too and enjoyed reading him books or leading him around by the hand.  Sometimes she snapped him right out of a crabby mood with her loving attention.  But really all of my siblings were incredibly sweet and loving.  Credit to attachment parenting?  Credit to my mother's gentle and loving example?  I don't know, but I don't think I've seen more affectionate kids anywhere. 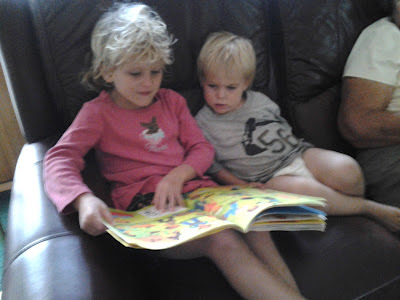 Joseph: Do you know the laws of thermodynamics?  The first one is ....

John Paul: On the way here, when we were at the airport ....

Juliana:  They had this craft booth that was "for foreigners only" so we got to make ...

John Paul:  I was telling the story, Juliana!

Juliana:  You're interrupting me!

Joseph: I'm going to study astrophysics when I grow up.  (Randomly hugs me.)

Charles: I'm a soldier and I'm going to shoot my guns at you!

Imagine all these things going on simultaneously.  I was thankful to have read about the trait of high sensitivity, because I was WAY out of my comfort zone with all the noise.  Of course knowing about it didn't make my siblings quiet down, but it was good to remember to take some quiet time for myself.  (I think some, if not all, of my siblings are highly sensitive too.  We are an intense family.  It's difficult to even get across how intense we are.)

Marko's Uncle Charles is only a year and a half older than him.  Charles is a few inches taller, but they both wear size 3T.  Marko was kind of terrified of Charles at first, due to Charles' habit of making scowly faces and shooty hands all the time, but after we left he kept asking to go back to "Charles's house" and for Charles to chase him.  So there you go. Nighttimes, I won't lie, were awful.  Awful and terrible.  Both kids slept with me, and they were constantly waking each other up.  When they were both awake, I was at a loss ... how to get one to sleep so I could focus on the other one, when the one I'm not holding is necessarily screaming?  And of course at nighttime, ONLY mama will do.  I ended up breaking my usual rules and just going out into the living room, turning on the light, and having awake time for awhile in the middle of the night.  It was better than waking the whole house with screaming, which we did kind of often.  My poor insomniac family.

The last two days we spent with some friends who live closer to the airport, and that was relaxing.  I mean, we were in a house with no other little kids and all the big kids completely focused on entertaining my kids.  And they had cows, goats, and chickens.  Need I say more?  Marko still didn't sleep worth a darn though.

Our trip back was harrowing.  Delayed plane, a long time spent on the jetway with the "fasten seatbelt" sign on ... which I enforced because the flight attendant told me we were leaving "right away" and that the plane would start moving suddenly, which didn't happen.  Then a lot of screaming on the plane because Marko's patience wore out and he was exhausted (of course).  Then a nap with both of them sprawled across me for two hours ... rather cramp-inducing, but I did get some sleep myself.  When we arrived in DC, we found our suitcase had arrived, but not our two carseats.  Doesn't get much worse than that, in terms of lost luggage.  We waited for a LONG time in a LONG line to file a claim for our luggage, and luckily United had loaner carseats available for just this situation.  Apparently it happens all the time.  (Not really that impressed with United lately.  The ONLY time anyone was pleasant, or took an effort for a harried mom with two small children, was when I accidentally blundered into the priority check-in line.  No one called me on it so I just checked in there.  Short lines, friendly agents, computers that actually worked, and they took my carseats themselves instead of making me walk all the way down to the TSA oversize bag check.)  But oh was it ever wonderful to get home to my own bed again ... once Marko finally went to sleep at 3 a.m. Eastern time.

It was fun, I loved seeing my family, and it's great that Marko now knows who is grandparents, aunts, and uncles are, but let me tell you ... next time I am bringing John no matter what because I missed him awfully AND I felt at least two hands short.  Maybe four because John always seems to do more than you would think a human being could.
Posted by Sheila at 3:56 PM

What adorable pictures! I can't believe how big Juliana is.