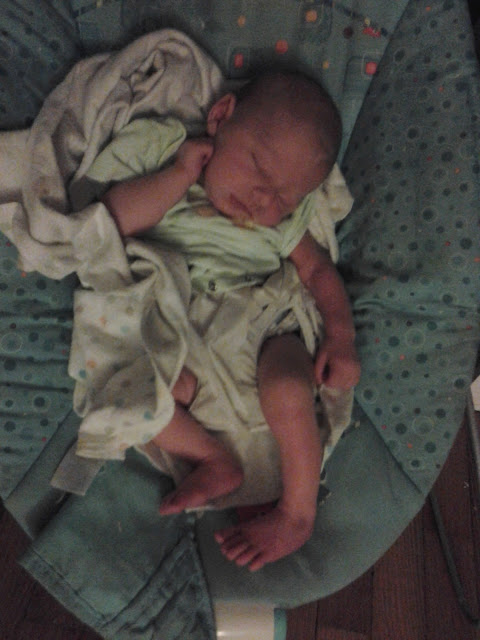 Approximately eight seconds after this picture was taken, Michael was awake and fussing.

The thing about being a second child is, you're always bound to be compared to the first, whether for better or worse.  I spend all of my time noticing all the ways Michael is like Marko was, and how he's different.

He looks pretty similar to me.  But in personality, he couldn't be more different (so far).

Marko's main trait people noticed at this age was that he was SO alert.  Eyes wide, looking around, upset if he was held facing you because he couldn't see.  He liked to be down on the floor, even at a week old.  He liked to be held upright, and he only slept on his tummy ever.  The slightest sound woke him.  I could not cosleep with him at all -- we kept each other awake.  By three days old, he had settled into an every-three-hours nursing schedule and never ever comfort nursed.  For comfort, he wanted motion.

Michael barely opened his eyes for the first few days, and now that he's five days old, we still don't see them often.  He sleeps a lot, but not for very long stretches.  His favorite thing, by a long shot, is eating.  He was nursing about a half hour on, a half hour off, for his first couple of days.  Now that there's plenty of milk to go around, he has cut back a bit, but anytime he wakes up, gets a change, or gets jostled, he starts rooting around to nurse again.  (It's hard to tell if that's the only reason why I'm sore, or if there's a problem with his latch, but I am super sore.  It definitely is a triumph that he's latching at all at this point, since Marko didn't, but I would love for this to be easy.  I'm sure I will be blogging more on this topic soon.)  He likes to be lying down horizontally, and doesn't care to be upright.  When I bring him up to my shoulder to burp him, he soon starts trying to slide back down.

Our first night (that is, from three a.m. till about eight a.m. when we were all up for the day) I tried to lay him down six inches from me in our bed.  Apparently that was way too far.  He wanted to be latched on all night.  And for the first few nights, he pretty much was!  I drifted in and out of dozing to switch sides every hour or so.  Now he has moved to sleeping for two hours at a stretch, but he still wants to be in the crook of my arm the whole time.  In the daytime, he's pretty good at sleeping through any noise (and Marko does test this theory frequently!), getting handed from one person to another, getting switched from arm to arm and carried around the house, but if you put him down?  Forget about it.  Sitting up in his bouncer, lying on his back, lying on his tummy -- they do not suit him.  He wants to be IN. YOUR. ARMS.  As sore as my arms are, this does gratify me a lot.  I wanted a snuggler, after all!

I wonder how many of these "personality" differences have to do with how they each spent their first few days.  Marko, in the hospital, learned separation early on.  He slept in his little fishtank of a bassinet his first two nights, some of the time in my room and some of the time under a warmer in the nursery.  He was swaddled tightly by the nurses and didn't eat anything till twelve hours old.  When he did nurse, it was with a silicone shield that wasn't very comforting.  His earliest memories of comfort don't include being touched or nursing.  We fell onto motion as a way of comforting him when everything else failed.

Michael was crying soon after birth, once he noticed he was out of his warm comfy womb, and it was automatic for me to nurse him right away.  And there was no moment in his first hours when anyone wanted to put him down.  So from 15 minutes old he had made the connection of sad --> nurse --> happy.  And not-being-held --> something's wrong --> pick me up, please!  Some might take this as a reason not to have such a peaceful birth.  But I think it's great to have a baby whose original instincts to nurse and get skin-to-skin with an adult are completely intact.  And I know, having brought one child through infancy already, that there are real advantages to a baby who relies on people rather than props for comfort.  As long as he just wants nursing and holding, there's no need for a certain setting or a strict schedule.  And hopefully, hopefully, he is too attached to nursing to start starving himself when he decides nursing doesn't suit him, like Marko used to do.

Who knows what he'll turn out to be like.  I mean, at the moment, he's just being an ordinary newborn (which Marko wasn't), and he could turn out to be very different in a month or two.  But for the moment, I like feeling like I have a baby who wants to be a baby, wants to be held, and is as unwilling to let go of me as I am of him.
Posted by Sheila at 8:12 PM

Great post! So glad things are going well, Sheila! I had a lot of soreness (with nursing) with my daughter too. I think sometimes it was latch, other times it was old fashioned frequency, lol. Keep up with your lanolin!

He's such a precious little boy...my babies always looked go, I don't know, grown. :( I like your little guys.

It's funny, my second has turned out to be a nurser-sleeper as well, very different from Vincent. He's less energetic, more demanding, doesn't spit up, but demands to be changed RIGHT AWAY. I love that they have such distinct personalities even at this stage.