Why I don't criticize other parents anymore 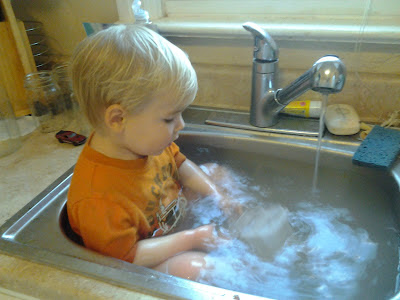 If you can find at least 4 things to judge about this picture, you win!
Ever heard the saying, "I was such a great parent before I had kids"? Yeah, that was me. With years of big-sistering, nannying, and teaching under my belt, I figured I knew a thing or two about kids. I knew how to manage them. I could get results out of them their parents couldn't. (I didn't know, at the time, that most people can get results out of kids that their parents can't ... because kids act the worst with their parents, since they feel safe.) And when I saw a kid acting up, I knew how to fix the problem.

John, being the second of ten, also knew a thing or two about kids. So when we would go out pre-kids and see a child misbehaving, we would look at each other and shake our heads. "Our children won't do that," we would say sagely.

Ha. Ha. Ha. I think God heard us, laughed, and picked out a very special kid just for us, to humble us. I'm pretty sure by now he's done every single one of the things I've ever judged someone else's kid for. Only he did them more, and worse.

There are a lot of ways that we parents can criticize other parents. I break it into four categories.

1. Directly to the other parent. "You are handling that completely wrong. Do it this way." "Well, no wonder he's doing that. You aren't strict enough/are too strict/don't care enough about his diet." "Obviously he doesn't know who the boss is. You must let him walk all over you." Whatever.

2. Specifically, but to others. "I saw a mom today with her four-year-old running 30 yards ahead of her in the street. That's just bad parenting. Someone could have walked by and snatched her child before she could have done anything about it." Usually this kind of thing is posted on Facebook.

3. Generally, talking about a certain group. "Isn't it disgusting the way some moms let their kids run around with no pants on?"

4. In our own head. "It sure seems to me that woman could just pick up her child and take him out of the store instead of trying to negotiate him out of his screaming fit. Maybe if I avoid eye contact she won't know I'm secretly judging her."

#1, most of us don't do, because we look like jerks when we do. There's always a mom (or dad) here or there who does that, and no one likes them. We all want to yell, "I'm doing my best, dangit, parent your own child and leave mine out of it!"

#2 still strikes me as rude, though. Even though the person will never see it. But the main issue is that I always think, "Are people doing the same thing to me?" Because I totally let my kid run up ahead of me on a quiet enough street. Is Facebook exploding (in some corner I don't know about) with my bad parenting? And is that particular friend saying things like that about me behind my back?

#3, I think a lot of us do. I've fallen prey to it from time to time. But I try so hard not to. You never know who, of the people who read what you write or listen to what you say, might fit into that category. In response to this example, for instance, I am so tempted to say, "I let my kid run around with no pants on because it allows him to take himself to the potty and not pee all over himself while waiting for me to get his pants off. He has no sense of modesty yet, and no one is staring at him. Isn't being potty independent worth a little nudity?" Only I don't say that, because then I would reveal myself as one of those awful, terrible, bad moms. I suddenly don't want my friend to know that my kid is running around pants-free at this very moment. I start to feel embarrassed of my choices, like I will have to hide them around this friend.

If I do comment on one of these, the person always says, "I didn't mean you. I meant other people, the ones who ...." and then it goes on into some other description, which also could possibly be applied to me. Once I've applied it to myself, it's hard to unstick the notion that, if this person really knew me and the way I parent, they would hate and judge me. Or, if not me, some person I know and like. I imagine some third party I know reading it and thinking, "Oh. X thinks I'm a terrible parent." It's just that it's never safe to assume everyone you are speaking to agrees with you and doesn't do the things you mentioned. (As I learned recently when running my mouth off at a party, only later discovering that one of the people listening to me actually strongly disagreed with me, but didn't say anything -- presumably because of my know-it-all tone and obvious assumption that everyone did agree with me because they weren't idiots and only an idiot would disagree with me. I spent almost a week agonizing over my tactlessness and arrogance. So easy to NOT say something ... so impossible to UNsay something.)

#4, I admit it. I do this all the time. I try and try not to, but I do. Presumably because the judging faculty is given to us for a reason: so that we can imagine ourselves in different circumstances and decide what we would do. In fact, it's probably good practice, especially when we're looking at children older than ours, to think, "What would I do in that circumstance? What would the right thing be?"

But I try never to assume that the person actually is a bad parent. Because chances are very good that you don't know everything there is to know about the situation. Take the kid having a tantrum in the store. We all see it sometimes. There are a dozen possible reactions, and we probably have in our heads what the "right" one would be.

Maybe the child is way too old to be behaving that way. But you don't know he isn't developmentally disabled. Not all disabilities show. And many of them, like SPD or autism, manifest themselves in epic meltdowns that don't appear "age-appropriate." The last thing I would want to do in that situation is assume it's because the parent is a failure. They're probably an awesome parent who is somehow managing to cope for years with behavior our own kids got through in a few months. They're probably a better parent than me. I don't know.

Maybe I think the mother should stop shopping and actually listen to their child. After all, the kid's probably upset due to some legitimate need the parent is ignoring as they keep rushing through the aisles, throwing stuff into the cart. But, legitimate need or not, she might be a on a strict schedule to get home for the babysitter (where her other nine children are waiting for her). She doesn't have time for a "time-in" with the screamer. She's weighed her options and realized pacification isn't going to work and she doesn't have time for a long comforting session, so she chose the "race through the store and try to get out before it reaches disaster proportions" tactic. She may be a better parent than me. I don't know.

Maybe I think she shouldn't be losing her temper at him, yelling right back at him to shut up while he screams and cries. But I don't know what else she's got on her plate. Maybe she hasn't slept in two nights and her husband is deployed in Afghanistan ... and missed their last phone call, so she's worried. The kid is cutting teeth; he's been screaming like this for days and she knows perfectly well nothing she does is going to help. And yet, despite her stress and anxiety, she doesn't hit or punish him. She might be a better parent than me. I don't know.

I'm probably always going to judge other parents. That's the way the human brain works, and you all know I got me some strong opinions. But I try very hard not to criticize them out loud. You never know who's listening and might be hurt by your words. I've hurt people with my thoughtless words a heck of a lot and I would like to stop doing it.

What is your rule of thumb for criticizing other parents? How do you police yourself to make sure you don't break your own standards?
Posted by Sheila at 7:54 PM

Your sink sponges are blue?! All I ever find are yellow. Oh, there's a kid in that sink. hm...

I LOVE THE PICTURE! I totally admire and envy the love, devotion,research, and sacrifice you give to your little son. And how much fun you have loving him just the way he is.
I guess the rest of this goes into
"What would Jesus do?" And then do it unto yourself, too. Jesus would understand, be gentle, know whether to offer help or look the other way politely. Jesus just said in the Gospel, "I didn't come into the world to condemn." IF our thoughts toward others were as merciful as this, I have a feeling we would then start picturing that other person thinking loving, empathetic thoughts toward us, and wow!

There are no cleavers near the sink. You should probably get some for your kitchen; they're handy. ; )

I like to say that we were trained well to be non-judgmental with our first son.

He's a good kid and also...(the terms I have heard are) high need, sensitive, strong willed, energetic and spirited. : )

I only feel *judgy" when I see parents being mean to their kids. The KID'S behavior almost never triggers it. Kids have limited ways to express their feelings and besides...

...you never know the whole story...unless it's yours.

You can't quite see the knife block, but it's in his reach. So is the soap and the string for the blinds and, of course, the edge. So you could, if you wanted, judge me for all those things -- but, of course, you can tell I'm standing right there. I wouldn't leave my kid in the sink without being in arms' reach. (Some kids might be that trustworthy. Mine's not.)