Physical affection for the non-snuggler 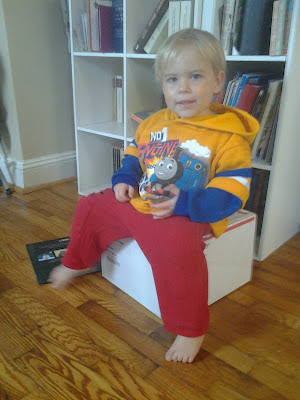 I complain a lot about my very physical, very non-snuggly son. When he's feeling the least bit crabby, and sometimes when he isn't, he climbs all over me. He isn't at all gentle. He pulls at my hair, climbs up my pregnant belly, and pokes at my eyes. I've tried and tried to teach him to be gentle, but for some reason this is a really hard lesson for him to learn.

If he gets too rough, I do put him down. But he gives a wail like his heart is breaking, and I just know he has some need that he is trying to meet by what he's doing. He wouldn't be so attached to doing these things, and do them specifically when he's unhappy and needs comforting, if there weren't some comfort he was getting out of it.

So I would try to pick him up and hold him on my lap. But he refuses to snuggle. This child does not melt into you like other kids do when they snuggle. He doesn't sit quietly. First he tries to rotate around so he's facing me, then he grabs two fistfuls of hair and starts to climb. I force him back to my lap and he starts to slide off ... but if I let him slide off instead of catching and holding him, he cries. Then he leans way backward so he's hanging upside-down. My arms just can't keep him in that position for long, but again, if I stop him, there are more tears.

I've been puzzling over this for a long time -- pretty much his whole life, actually, because he has never, ever been a snuggler -- and I've come up with a few things that really help.

I just concluded that what he really needs is physical touch and stimulation. But it has to be rough touch. And he has to be moving. If snuggling is at all confining, it's like torture for him. So the number one best thing for this kid is tickling. I've always tickled him from time to time, but it hasn't been a big thing with me. I made a resolution this week to tickle him for a significant block of time every day.

Because tickling can make a child feel helpless or out of control, I leave it up to him: "Would you like a neck nuzzle? What about a belly blow?" He almost always yells "Yes!" If he says "No!" a moment later, I stop. More often, though, I stop for a breather and he yells "More tickles!" I always want this to be something he wants and asks for.

In addition to tickling, I'm trying to do more roughhousing. This is hard for me because I'm worried about getting kicked or elbowed ... he is a big kid, after all, and a strong one. But I've figured out a lot of rough games that don't put anyone at much risk for being hurt: chase, rocketship, dangling upside-down, and so forth. Daddy does all this better than me, but I've stopped leaving it all for him -- I make sure I'm doing it some too, generally in the morning after chore time when Marko needs a bit of attention anyway. We wind down with big bear hugs and kisses (lately, Marko does like these).

A final thing Marko loves is being carried. Since he's in motion, he doesn't get antsy like he does with other forms of physical touch. Unfortunately, I can't do that. It sucks, and I sometimes feel like I'm failing him as a mother because I can't give him that comfort. Especially because I did very little babywearing -- basically only at work -- when he was smaller. He probably needed it then, and didn't get it, and still needs it now. On the other hand, we have been transitioning into other forms of physical affection that he does like, and which he won't grow too big for, so hopefully not getting carried as much won't do him any harm.

The only downside of all this is that I don't get what I need. I know this isn't something most people bring up -- you don't want to sound like you're selfish! But the fact is, I need physical affection, too. It's one of my primary love languages and I have always known it makes me a better mother the more physical contact I get. That was the wonderful thing about cosleeping, and why I want to do it more next time. I would wake up feeling much more tolerant and patient about whatever little thing was bothering us when we went down for a nap. Sleeping alone on the couch while Marko slept in his crib has never had the same effect.

So I try to get my snuggles in where I can. I still rock Marko to sleep in my arms, and I very often keep holding him for awhile after he's asleep. If he wakes at night, I go in and lie down with him, rather than picking him up. (This is mainly for the sake of my back, secondarily so he learns to go back to sleep in his own bed, and only lastly for the snuggles -- but those are nice too.) And if I'm feeling impatient, frustrated, and angry, I offer to read a book. A book keeps Marko quiet and happy, and he doesn't even notice that my arm is around him. (I wish this would satisfy his physical needs, too, but it doesn't seem to.) I always feel calmer and more loving toward him after reading time.

I've spent most of Marko's life thinking, "How sad, my son just doesn't need snuggles!" He didn't want to be held much, so I gave him lots of floor time. Now I'm thinking he does need snuggles after all -- he just doesn't know it, and is too high-energy to get the kind of snuggles I most readily hand out. My addition of tickling and roughhousing, though, has really helped. Perhaps it's really that his cold is getting better and his teeth are finishing up coming in. But this week has been a much easier week than the past couple. And the climbing and hair-pulling has virtually ceased! When it does appear again, I offer tickles or chasing or some other physical thing, and Marko accepts readily. And once he's had that, he goes back to playing, not climbing.

You have no idea how much better this revelation makes me feel. I hope it continues to work -- but if it doesn't, I think the train of thought that brought it up will suggest another course of action. I just have to ask, "How else can I fulfill the need he has that he's trying to fulfill right now?" Hopefully that will lead me to new answers. All I want is to show my little boy the love he needs.

*Note. I know some of what I describe sounds like sensory processing disorder. I don't think he has that, because it's not as extreme as I make it sound sometimes. It's not all the time, and it's not beyond what some other toddlers I've seen also do. But yes, I do keep an eye on that possibility, for what it's worth.
Posted by Sheila at 7:51 PM

When I worked with disabled children, we would often have meetings to address the children's needs and how to meet them. Usually the conversation would begin with, "So and so is doing this behavior problem. What need might this represent, and how can he meet it within the parameters of our classroom and social acceptability?" It sounds like you are doing the same thing.

I was the same way when I was a child. My mother said I would stiffen up anytime she tried to hug me. My first daughter is like this too. It worked for me, though, because I'm not a snugly person by nature. All your descriptions of Marko sound so much like my oldest daughter. During Mass, I would look with envy at all the other mothers who had calm children that actually sat in their laps. My daughter could not stop moving. I remember some of my fellow students at C-dom trying to hold her when she was a baby and commenting on how wiggly she was.

My second daughter is super cuddly, though, and I was surprised to find how much I love it. Now my trouble is making sure my first daughter knows how much I love her through different ways, since physical touch is not the way she wants it communicated. That's not to say that she never wants to be held or be hugged. I love it when she randomly decides to hug me; it's almost an honor.

Sheila, I was just reading about children's personality types (not based on Myers-Briggs, though) and your description of Marko is almost a textbook example of one of them! One actual example given was of a very active little boy who liked alternating between building things and tearing them down: he was that full of energy. Children with this temperament love to move and to try new things, and hate to sit still; and they may have huge meltdowns when they're told "no." They want to be in charge and seem to get a lot of energy from the conflict that comes from trying to take charge.

Off the top of my head, I can't remember what the author recommended, but it can't be as good as your own realisation. I agree with you that even non-cuddlers need physical affection--and I think your addition of tickling and gentle wrestling to your own natural "cuddling style" (LOL!) is exactly what Marko needs. =)

Was it "Temperament Tools"? Someone recently sent me an excerpt from that book, and apparently Marko is the perfect example of a "Bluebird." It was a good enough description that I'm keeping an eye out for the book ... I want to know what they recommend!

Though, with or without the book, the real key is to stay tuned-in to the actual child I have. I learn so much that way. He and I have such different personalities, and yet I feel a really strong rapport with him most of the time.

Actually, it was a book based on the five Chinese temperaments. If I remember correctly, Marko is "Wood".