We need Daddy around 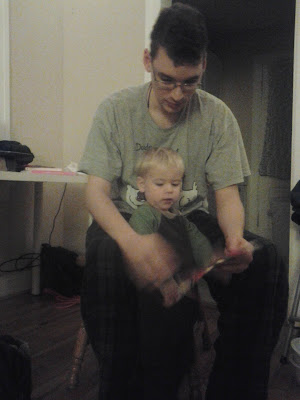 Now that John is home safe and sound, I feel okay telling you guys that he was gone all last week. Yes, he's now traveling with his job, and they started him off with a seven-day trip to Canada. Let me tell you, it was kind of a rough seven days.

Part of this was my fault. I had the car all week, so I figured it would be a good time to Do Stuff. Plus I thought it would help both Marko and me not to miss John too much if we were always on the go. But this backfired in making me extremely stressed out (I'm a homebody and really prefer to stay completely at home on an average day) and Marko overstimulated and not sleeping on his usual schedule. Some days he would nap unexpectedly in the car and ruin bedtime. Other times I was out too late to start our bedtime routine at the usual time, and he'd be overtired when I finally put him to bed. I should have paced myself a bit more -- maybe one day at a friend's house, one shopping trip, and one library day.

I made plans for what I was going to do in those long, bored, lonely evenings, seeing as Marko usually goes to bed by 7:30 and I usually stay up till 9:30 or 10. Ha! One night he stayed up till eleven at night! Other nights we spent rocking and rocking in the bedroom while he just flailed around restlessly. John has always been able to cope with him when he's overtired, but his technique appears to be pure Daddy magic -- I can't duplicate it. At least one night ended in him screaming himself to sleep in my arms. I felt like the world's worst mother.

And the one or two nights when he did go to bed at a reasonable hour, I was so stressed that it took me the whole evening to unwind ... AND to do all the housework I couldn't do during the day. The days where we were out, I couldn't do any housework, so I ended up doing double on the days I was there. I didn't realize this, but somehow all the work still needs to be done whether we're there or not! Especially when we're only there for little bits of time when I madly cook food for us to eat, scarf it down, and then leave the dishes in the sink while we jet off again. They had to be done eventually, obviously! One evening after bedtime I actually scrubbed the whole floor on my hands and knees. It was my only chance to do it without Marko tracking all over it, so I did ... but between that, and the extra housework I did the next morning, I threw out my back and gave myself a ton of Braxton-Hicks contractions. (Note: Lots of toning contractions seem to be normal for me. But I still don't care for them and am, at 24 weeks, trying not to bring them on.)

I would not make a very good single mom. In fact, it is a marvel to me that anyone does.

One thing I noticed about Marko was that he was getting very rough with me: climbing all over me, pulling my hair, and never, ever, being still in my arms. Now that John's back, I can see the problem: I wasn't roughhousing with him. I wasn't even tickling him. He didn't know that was what he needed, but he did know he had all this physical energy and needed to let it out. Daddy does that like a charm and really fills his need for rough physical attention.

The worst thing about the whole week was the feeling of being always on. That I could never just step back and let someone else handle something. I tried to let several friends help carry him around when I was with them, but he was having none of it. When he's uncertain, he needs one of us -- and that was me. Despite my virtual inability to lift him at all.

I just could feel my stress level rising the whole time. I was a less patient mother. I said "no" a lot more, and "yes" a lot less. One time I was scrubbing the floor on my knees with Marko hanging on my back, yelling "No get off my back! No I'm really serious! No it's not funny!" and giggling fit to bust ... and I thought, "I canNOT do this." Of course, I could, because I had to, and I did. But it was far, far from the ideal.

It just got me thinking of how necessary dads are. First off, just for the mom. How is she supposed to be a good, patient mother if she never even gets a shower? How is she supposed to get her teeth drilled, her hair cut, or her doctor visits in if there is no one else really close to her child to leave him with? What is she supposed to do when she gets the flu? (Grandmas are good for this job ... if your mom happens to live close by and isn't otherwise engaged. That's how people managed "in the old days," that is, in time periods where it was considered acceptable for dads never to lift a finger to help with the child-raising.) And sometimes you just snap in the middle of the night and NEED to be able to hand the baby off to someone who isn't off their rocker. A kid doesn't need two parents to be there at every moment -- but a kid takes so much out of one person that there need to be two to switch off or someone's going to go crazy.

And then for the kids. I have heard from at least three people lately that kids don't really need their dads around until they're older. Apparently teens need a close relationship with their dads. But how is that relationship supposed to spring up out of nothing? It starts out in infancy, grows through middle childhood with lots of roughhousing, ticklefights, ball games, and so forth. Any dad who thinks he can ignore his kids until they're ten, and then leap in and be a trusted authority to them, is kidding himself.

Besides, dads can care for young children in ways moms can't. John, for instance, is a star at tickling and other physical games. I don't normally throw my kid into hysterical fits of giggling, but John does. I think Marko really needs that. When he was a baby, it was really important for him to have someone to rock him to sleep without nursing -- especially when we were having trouble with nursing anyway. Marko found it really comforting to snuggle up with Daddy and know that no one was going to be expecting him to eat. I often relied on John to calm him down after a failed attempt at feeding him so that I could try again when he had settled down. Dads have a different approach that kids need just as much as the mom's.

I was really upset recently when I was at a friend's house and the friend was rocking her youngest to sleep. While she was at it, her next youngest needed help in the bathroom -- the kind of conundrum that parents of more than one have all the time. Luckily, her husband was conveniently available. So she asked him to take care of the other child. Simple enough. But he asked, "Do I have to?"

I was simply boggled. I guess most dads say this at least sometimes. I'm not accustomed to it because my husband does not. Sometimes I get annoyed that I have to ask him to do things that I think should be obvious. But he never, ever drags his feet to do something for his own kid when asked to do it. I think it's ridiculous that any dad would. I mean, they are every bit as much parents as the moms are. They were presumably happy enough to help conceive the kid. But still, after all that feminism was supposed to have done for us, there are still lots and lots of guys who go to work from 9-5 and think that they have done everything they have to do to be good dads. Eight hours of work, while their wives do 24, and they still think that they deserve to be waited on when they come home.

That just ticks me off. I now, for the first time since I got married, realize what it is like to try to do the whole job of parenting all by myself. And it sucks. I can understand putting up with it of necessity, like we are, or like single moms do. But I cannot understand, at all, putting up with it because the dad isn't willing to step up to the plate. We need dads. We need them present, involved, and equal. Anything less is unfair to moms and kids.

So that's my rant.

John got home Saturday night. He'd been working all week and had been traveling all day. And on Sunday, he sent me off, first thing, to take a nap.

I'm with you on this, Shelia. My kids are very attached to their daddy and the time he spends with them. And we tag team *everything*. It's simply necessary with more than 1 kid. We wouldn't have it any other way.