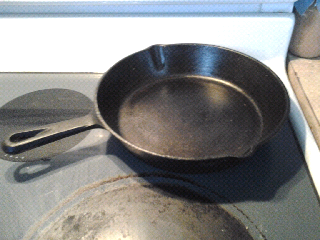 One of my Christmas presents this year was a set of three cast iron skillets of different sizes. I've been wanting to try cooking with cast iron for awhile, so I was particularly excited to get Christmas dinner started on one of those.

For instance, you're supposed to preheat them slowly, starting on low heat before moving up to the temperature you want. Because they're heavy, they take longer to preheat than my old teflon pan does. You're also supposed to heat them on a burner before putting them away, to make sure they're completely dry. If you have a glass-top stove, which I do, you can't scootch them across the stove - you have to lift them and set them down carefully.

After a few battles to get off gravy with nothing but lukewarm water and a soft rag, I made a new rule: they are only for dry things. Sauces are just too dang much trouble and I can do them in a pot.

What does work well in my cast iron? Steak. Pancakes. Corn pone and cornbread. Crepes. And no greasing is required. As someone who used to have to add more butter before each pancake to keep them from sticking, I do appreciate that. Though I don't like to test fate, either, so I oil them lightly before most uses.

My major fail, though, was eggs. John made me fried eggs in the big skillet that turned out perfectly. So I got daring and tried scrambled the next week. And you know how every time you try to scramble an egg, you look away for one second and when you look back, the eggs are cooked to the pan? Yeah. That happened.

So I tried all of the approved methods. Immediate cold water is called for with cooked-on eggs, but that's not allowed with cast-iron. So I let it cool down on its own and then tried to wash it with a soft rag and no soap. No luck. Another tip was to scour with salt. That got some off, but left a lot. I had heard to boil water in the pan to loosen cooked-on food, but that of course made it worse. I scraped a lot off with my fingernails. And then I said "What the heck" and soaked it for awhile.

When I came back, there was a bit of rust forming. What?! So I dumped the water out, scoured the egg, seasoning, AND rust off the pan and set to reseason it. I rubbed it with oil (olive, because that's what I had) and put it in the oven for an hour at 350. It made the whole house smell, like melting plastic, but it seemed to have worked. Until I touched it later and found it was now sticky. Apparently I had used too much oil. So I heated up the pan and wiped it down with a paper towel. Now it's only a little bit sticky. Sigh.

I'll admit it: those pans are high-maintanence. They're fussy. But I don't think I care to go back to making cornbread any other way. The brown crust it forms is just too good. Crepes that don't stick are another plus, one I've never achieved with another pan. And it is nice to be able to cook a steak just right without it sticking or being drowned in oil. I like the way they can go from the stovetop to the oven, and the way they keep the food warm while you're setting the table.

So, they're worth the trouble. But for eggs and anything sticky or saucy, I'm keeping my old pan. There may be a way my cast-iron could handle those, but I think I would get grey hair trying to find out the secret.

Do you use cast iron? How do you like it?

Since I'm not melancholic like you :), I completely ignore all directions (except I USUALLY don't use soap on mine) and I use my cast iron for EVERYTHING and it works great. When I think of it I rub some oil on them or at least try to cook something in oil in them the next time after making something like a sauce. I mostly use them for sauteing veggies in lots of lard or duck fat, so I basically just wipe them with a towel after that. I definitely DO use metal implements on them (why ever not?) and I do scour them with a hard bristled brush or wet doby pad or something of the kind. My only advice is USE IT! Use it for everythign. The more you use it the better it gets. I don't find it fussy at all. And I got mine unseasoned. So. That's my two cents.

When my husband and I were registering for wedding gifts we decided to avoid nonstick coatings, but I was very intimidated by all the rules for cast iron. So we got stainless steel, which is relatively cheap (though not if you're buying 8 pans at once...my uncle bought 6 and I still need to write him a thank you note; bad me) and lightweight and seems to do anything. We do have a bit of trouble with eggs sticking, but we can chip it off with a fork if we have to. :) (I'm not sure we're actually SUPPOSED to do that, but it doesn't seem to have hurt the pans.) And we've definitely soaked them for a day or two at a stretch without ill effects.

Oh, and they're SHINY.

That's funny, Sarah, it's been ages since anyone called me melancholic. Most people put me down as straight-up sanguine.

A relief to hear you can neglect your cast iron a bit and have it still work fine.

Sojourner, I have one giant stainless steel pan which I don't mind, but everything does stick on it. I don't care if scrambled eggs stick a bit so long as I can get them off again, but it's a real problem when making pancakes, sunny-side-up eggs, or really anything that is ruined if it sticks to the pan. I do use to it brown ground beef in, though.

Seems I now have to keep three skillets of roughly equal size around at all times! I need them all, for different things.

I am with Sarah. I LOVE mine! I use it for everything, though to be honest, my small one hasn't been "washed" in ages. I just reuse the oil/grease. It sounds gross, but that pan makes the best fried eggs ever. I suppose it is the southern girl in me. :)

Also, I use a metal spatula when cooking. As long as you are not stabbing the pan or scrapping vigorously with it, I don't think it should be a problem.

My larger one, since I tend to go from stove to oven when cooking with it, I wash it out. I take a paper towel, dip the tip in oil or butter (whatever is closest at the time) and just lightly go around. I actually don't stick it back in the oven.

I have never had rust on either of mine, and my small one I seasoned myself. They are not actually as high maintenance as some make it seem. Good luck!

I am generally incompetent at egg-making; I just do scrambled or boiled. My husband has actually made some beautiful omelettes on our pans, but the time he tried fried eggs was the time we had to scrape the gunk off with a fork.

I also haven't made pancakes yet. (I'm more likely to make waffles if I do feel like syrup-drenched carby goodness for breakfast. My poor waffle maker only does the one thing and has been all neglected lately.)

I use cast iron pans and I most certainly use metal implements on them (as Sarah said, why ever not?), start them on high heat, pour cold water on them while hot and scour and use a bit of soap if necessary. The only thing I am careful about is drying them on the stove. The beauty of cast iron is that it's sturdy.

What a relief! I was pretty overwhelmed by all those rules.

Sheila, I agree with the above commenters, cast iron's not nearly as finicky as the rules make it sound! Most of the rules are just to keep you from ruining your seasoning. But so what if you do? That's the beauty of cast iron; unlike non-stick, which once scratched is ruined, if you ruin the seasoning on your pan, just re-season it, problem solved. And if you're too lazy to properly re-season it (like me!), you just use it anyway, no harm done.

From what I've read, pre-seasoned pans will improve a great deal with continued use. The non-stickness of the seasoning will continue to improve over time.

About the eggs, I've finally found a way to make eggs without sticking half of them to the pan. Here's the secret: pre-heating the pan adequately, then cooking the eggs quickly. Go ahead and put the iron pan on the eye empty (no oil or butter) and get it decently hot. If it's hot enough, the butter will melt very quickly. Put the beaten eggs in as soon as the butter is melted. The bottom layer of egg will set in just a few seconds. Use a spatula (metal is fine), scrape the set egg into a pile, tilting the pan to spread the still liquid parts out thinly, so they set quickly too. Continue till the eggs are set to your liking. (If it's too hot, the butter will start to brown immediately. If that happens, take the pan off the eye, put the eggs in immediately, and they'll probably cook with residual heat alone.) Because the eggs cook quickly, the grease doesn't have a chance to be absorbed by the eggs.

I've been wanting to try cast iron for a while, but haven't had the opportunity. We use non-stick pans at home for convenience, but when I'm at a friend's house, I can't get enough of her stainless steel skillet. It carmelises the onions better and browns the meat best.

Which doesn't really answer your question, does it? =P LOL!

I enjoyed reading your post, though. Cast iron sounds too high maintenance for me, but if I ever get a pan as a present, I'll come back to this for the useful tips. =)

Sheila, a straight-up sanguine probably wouldn't even have known that there WERE rules much less take the trouble to read them or consternate about following them. :) Heh. Hope you're getting used to that fabulous piece of kitchen equipment!
I love the other commenter's suggestion about heating the pan first good and hot before adding eggs. That really does work, when I have the patience to wait. :)